Harnessing the power of proteins in our cells to combat disease

UNLV scientist Gary Kleiger at the forefront of a potential new drug modality; research published in the journal Nature. 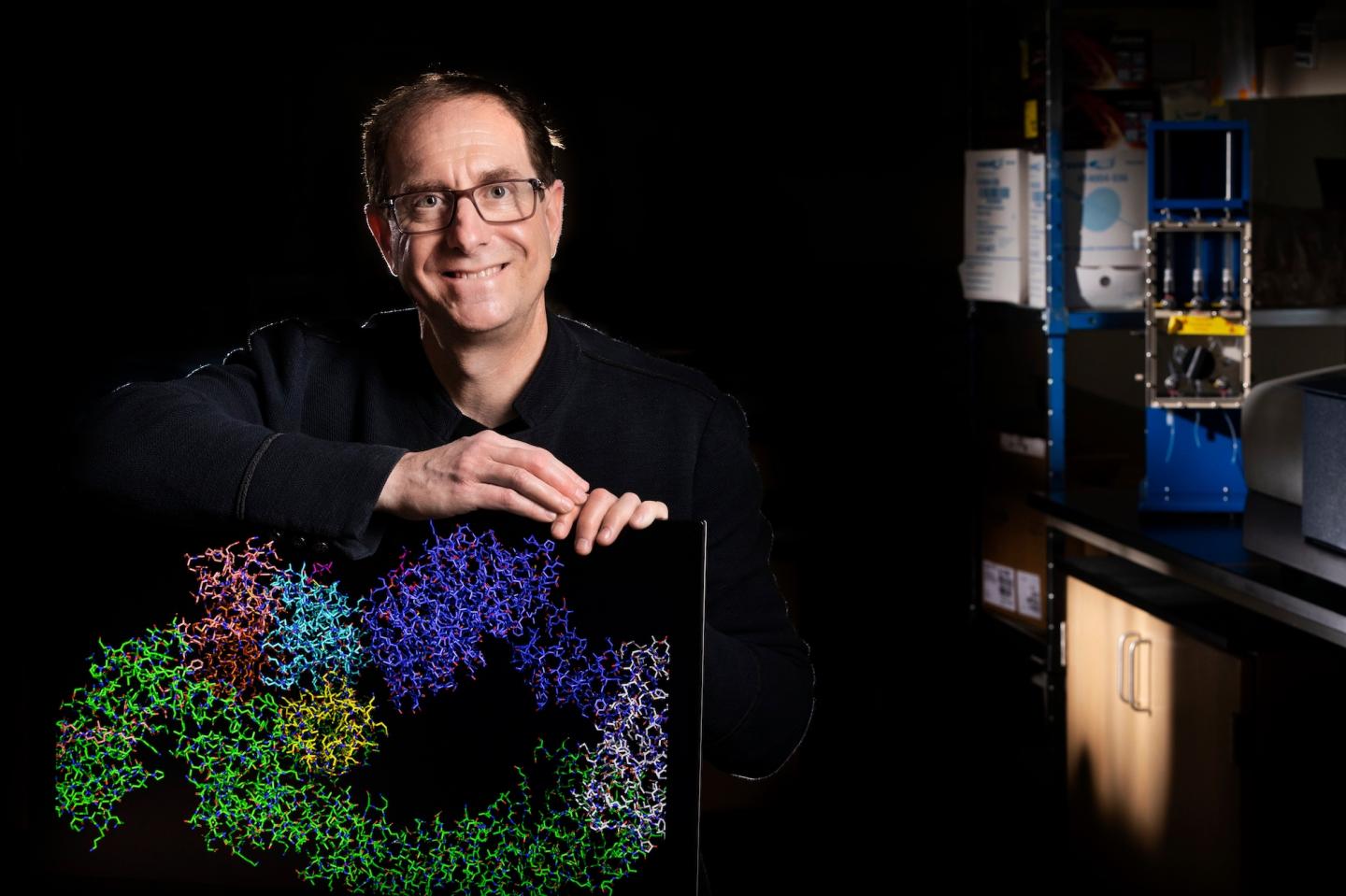 Over many decades now, traditional drug discovery methods have steadily improved at keeping diseases at bay and cancer in remission. And for the most part, it’s worked well.

But it hasn’t worked perfectly.

A lab on UNLV’s campus has been a hub of activity in recent years, playing a significant role in a new realm of drug discovery — one that could potentially provide a solution for patients who have run out of options.

“It’s starting to get to the point where we’ve kind of taken traditional drug discovery as far as we can, and we really need something new,” said UNLV biochemist Gary Kleiger.

Traditional drug discovery involves what is called the small molecule approach. To attack a protein that’s causing disease in a cancer cell, for instance, a traditional drug has to – in a very targeted way – find that protein and shut down its activities.

It’d be like filling a baseball player’s glove with a bunch of cement.

There’s a big but, however. Up until this point, traditional drugs have only had the capability to target proteins that are participating in the disease that also have activities that are amenable to the small molecule approach, or, like the baseball player, actively engaging in the sport on the field.

These proteins make up a seemingly small percentage of the disease-causing proteins in our bodies.

So, as you can imagine, Kleiger said, while this model has helped effectively treat HIV and cancer, and helped treat everyday diseases through the use of antibiotics, it has some major setbacks.

“Cancer cells are clever,” Kleiger said. “They can evolve very, very quickly. So, a drug might be working at first – targeting an enzyme and telling that enzyme, ‘stop doing your activity,’ which can stop the cancer cells from growing. Those cancer cells appear to lie dormant, but all the while there are still little things that happen that eventually enable those cancer cells to bypass that drug.” The upshot is that, to stay ahead of cancer’s capacity to evolve drug resistance, we need to be able to target many additional disease-causing proteins, and thus, limiting the landscape of druggable proteins is a serious disadvantage.

There might be a better way, and recent research published in the journal Nature by Kleiger and his collaborator Dr. Brenda Schulman (Max Planck Institute of Biochemistry in Munich, Germany), is helping a consortium of both academic and industry-based researchers who are developing this novel approach.

The new approach uses a family of human enzymes called ubiquitin ligases that exist in human cells. Enzymes are proteins in the cells of the body that speed up chemical reactions occurring at the cellular level and which help your body perform essential functions. There are roughly 20,000 known proteins in the human body, and perhaps some 5-10% are enzymes.

Kleiger first became interested in the ubiquitin protein as a postdoctoral fellow at the California Institute of Technology in the 2000s. At the time, Kleiger heard of a researcher who was working in what was then already appreciated to be an important field but that had yet to fully blossom.

“I didn’t have any idea that the field was going to become this important. I just thought it sounded really cool, and something I wanted to explore,” he said.

Now, nearly 20 years later, Kleiger and colleagues are helping to uncover how ubiquitin ligases work in molecular detail. And this has become especially important, considering that these enzymes are now being employed in a totally novel type of drug discovery modality.

Instead of targeting enzymes that have an active role in the disease – like the baseball player on the field – there might be a way to target practically any protein that has a role in making a person sick. Think of a baseball team manager or the owner, Kleiger said.

“They’re not a part of the team on the field, but they nevertheless can have a huge role to play in making the baseball team work,” he said. “If I want to get rid of that protein, I can’t use the traditional approach.”

That’s where the ubiquitin ligase comes in. In the presence of special new drugs first envisioned by Kleiger’s post-doctoral mentor Dr. Ray Deshaies and his collaborator Dr. Craig Crews, the ubiquitin ligase is now guided to the disease-causing protein to strategically target that protein for degradation, essentially killing it.

“People believe in this new modality, this new therapy so much that every major pharmaceutical company is now at various stages of developing this,” Kleiger said. Indeed, a phase two clinical trial led by the pharmaceutical company Arvinas is already testing the approach in patients for the treatment of prostate cancer. “This would be like the equivalent of you stepping into a batting cage for the old modality, to now being inside of Allegiant Stadium – this is an unbelievable new playing field.”

To do this work effectively, scientists needed to understand the biology of ubiquitin ligases — work that has been going on for less than 30 years, which is a short time in the grand scheme of science and discovery, Kleiger said. And in that time, the technology has gotten sharper and more efficient.

So efficient that for the first time, Kleiger’s collaborators are using new, state-of-the-art cryo electron microscopes to be able to take pictures of what the ubiquitin ligases look like when they’re at work.

“It’s enabling us for the first time to really be able to see how they work, which is going to have huge impacts on the pharmaceutical industry’s ability to make new drug therapies,” Kleiger said. “It’s truly a sea change moment.”

The microscope is able to photograph these enzymes, and in his lab on UNLV’s campus, Kleiger and collaborators use the photographs to hypothesize how the enzymes are working. He then measures the activity of ‘mutated’ enzymes that should now be defective in their activities if their hypothesis is correct.

The work would be similar to a 50,000-year old society being given a picture of a bicycle, and asked to explain how it works.

Kleiger examines the picture, and if it were the bicycle, uncovers that a gear on the bike is very important to its operational ability.

“If you were to bend that gear, now the bike’s not going to work — the chain will just fall off,” Kleiger said. “We can do that at the molecular level with the enzymes.”

His work, in collaboration with colleagues at the Max Planck Institute of Biochemistry and published in the journal Nature, has implications for how diseases will be treated in the future, and could especially be a lifeline for those suffering from diseases beyond cancers such as autoimmune conditions — diseases like rheumatoid arthritis, inflammatory bowel disease, lupus, or multiple sclerosis.

“These are diseases that millions of people around the world suffer from, so that’s one of the reasons why this is such great news,” Kleiger said. “For the first time ever, we’re seeing atomic resolution pictures of the ubiquitin ligase at work, and that’s undoubtedly going to be synergistic with pharmaceutical companies that are creating drugs harnessing the power of the ubiquitin ligase. It really could be a game changer.”