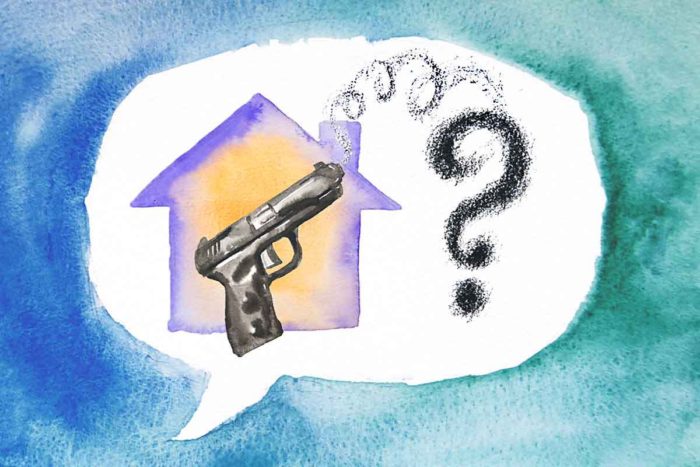 A survey of parents in Missouri and Illinois reveals that about half of the children in the families queried spent time in homes that have firearms. However, few reported talking about gun safety with their children’s pediatricians.

According to the study at Washington University School of Medicine in St. Louis, although most parents said they were open to such discussions, one-third of the parents who own firearms indicated they did not want to be asked about household firearms and would take offense to or ignore physician advice to remove guns from the home.

“Many physicians feel a professional obligation to discuss gun-violence prevention, but they don’t because they are not sure what to say or what they’re legally allowed to say,” said the study’s first author, Jane M. Garbutt, MD, a professor of medicine and of pediatrics. “Our research is a step toward finding a way to discuss firearm safety that is acceptable to both physicians and parents.”

The study is published Sept. 14 in The Journal of Pediatrics.

The researchers surveyed 1,246 parents in urban, suburban and rural pediatricians’ waiting rooms in Missouri and Illinois from March 23 through May 21, 2015.

The American Academy of Pediatrics (AAP) recommends that pediatricians screen parents about the presence of household firearms, emphasize that a home without guns is the safest and advocate safe storage of firearms.

In 2013, the most recent year for which statistics are available, 2,465 children and adolescents under age 20 died from firearm-related incidents; 15,091 were treated in emergency rooms, and 6,213 were hospitalized, according to the U.S. Centers for Disease Control and Prevention.

“A conversation about firearm safety needs to happen between parents and physicians, but it is not,” Garbutt said. “Physicians are concerned about offending and losing patients, and in many states, physicians face legal restrictions.”

For example, a Florida law currently being litigated uses the threat of penalties to prevent physicians from asking their patients direct questions about guns in their homes.

Among other findings from the study:

Of the 1,246 parents who responded to the survey, 447 — or 36 percent — reported firearms in the children’s homes. Two-thirds of these parents owned more than one firearm. An additional 14 percent of parents who reported no household firearms said their children regularly visited the homes of relatives and friends who owned guns. Despite half of children spending time in homes with firearms, less than 13 percent of the parents asked playmates’ parents about household firearms. Slightly more than 20 percent of the parents who owned firearms kept their guns and ammunition in the same location. Twenty-five percent reported at least one firearm currently was loaded, and, of this group, 14 percent indicated they were accessible to children. Eighteen percent of gun owners said that when leaving their homes, they carried the weapons in purses, backpacks, holsters or inside their cars.

“The study’s findings can influence clinical practice,” Garbutt said. “We are using this information to develop a communication strategy for physicians. We plan to test it to see if parents are receptive to it.”

Researchers found parents may be willing to discuss firearms in a health-care setting. Seventy-five percent believed pediatricians should advise about safe storage of firearms.

“The key to effective communication may be to avoid direct questioning about firearm ownership and instead to focus on ensuring safe storage of firearms to all parents,” Garbutt said. “If we treat firearm safety like we do other safety-proofing precautions, it removes judgment. It’s similar to advising parents to keep medications and household poisons such as bleach locked up and secure.

“This approach also may help parents to feel more comfortable discussing gun ownership with other parents,” Garbutt said. “It’s perfectly acceptable to ask another parent about car seats when carpooling, for instance. If we can get to this comfort level discussing firearms, it may decrease childhood injuries and death.”

The above post is reprinted from materials provided by Washington University in St. Louis. The original item was written by Kristina Sauerwein.

Robert C. Strunk, MD et al. What Are Parents Willing to Discuss with Their Pediatrician About Firearm Safety? A Parental Survey. The Journal of Pediatrics, September 2016 DOI: 10.1016/j.jpeds.2016.08.019