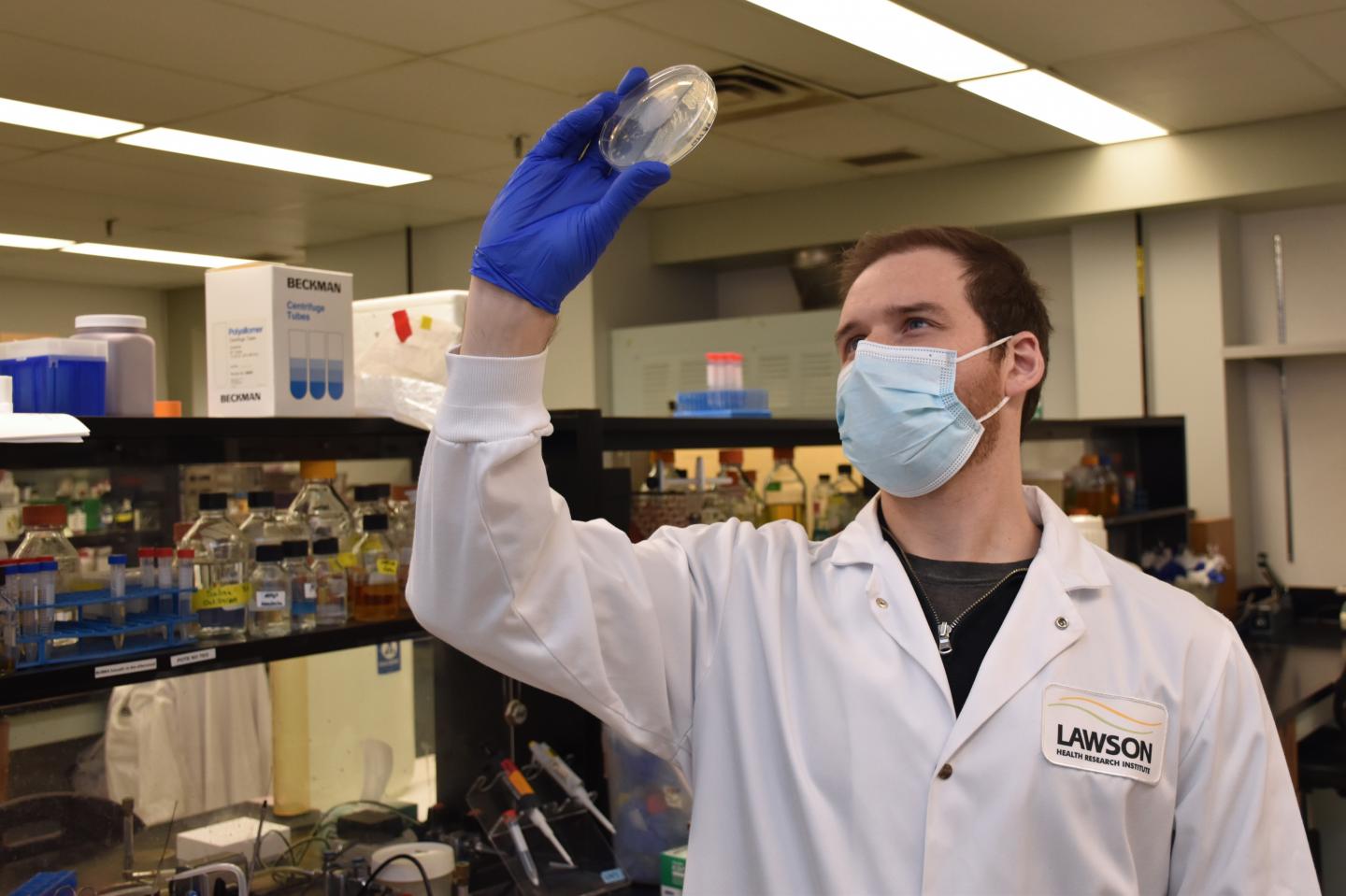 LONDON, ONTARIO – A new study from Lawson Health Research Institute and Western University illustrates how the gut microbiome interacts with an oral medication in prostate cancer patients, suggesting bacteria in the gut play a role in treatment outcomes. The findings, published in Nature Communications, highlight how the drug abiraterone acetate is metabolized by bacteria in the gut to reduce harmful organisms while promoting those that fight cancer. The team suspects this is one of many examples of how the microbiome influences our response to medications.

“Research is beginning to uncover the ways in which the human microbiome influences cancer development, progression and treatment,” explains Brendan Daisley, a PhD candidate at Western’s Schulich School of Medicine & Dentistry who is conducting research at Lawson. “Our study highlights a key interaction between a cancer drug and the gut microbiome that results in beneficial organisms with anti-cancer properties.”

Abiraterone acetate is a highly effective therapy used in the treatment of prostate cancer that has been resistant to other treatments. While abiraterone acetate also works to reduce androgens in the body, it does so through a different mechanism and, unlike traditional therapies, it is taken orally.

“When drugs are taken orally, they make their way through the intestinal tract where they come into contact with billions of microorganisms,” says Dr. Jeremy Burton, Lawson Scientist, Associate Professor at Schulich Medicine & Dentistry and lead researcher on the study. “While it’s long been a mystery why abiraterone acetate is so effective, our team wondered if the gut microbiome plays a role.”

They discovered that patients’ gut microbiomes changed drastically after taking abiraterone acetate. Bacteria in the gut metabolized the drug leading to a significant increase in a bacterium called Akkermansia muciniphila. Referred to as a ‘next-generation probiotic,’ this bacterium’s relevance has recently been explored in several large cancer studies. It’s been shown to facilitate a better response to cancer immunotherapy drugs and it can elicit a wide range of other positive health benefits as well. The increase in Akkermansia muciniphila also led to an increased production of vitamin K2 which is known for anti-cancer properties that can inhibit tumour growth.

The team also observed the impact of androgen depletion on the microbiome. Both abiraterone acetate and traditional androgen deprivation therapies led to a decrease in organisms that utilize androgen.

“These findings clearly demonstrate that the gut microbiome is playing a role in treatment response,” notes Dr. Burton.

The team hopes to further explore drug-microbiome interactions with a goal of harnessing the microbiome to improve treatment outcomes for a variety of diseases. In another study, they are exploring whether fecal microbiota transplants from a healthy donor can change the microbiome of melanoma patients to increase organisms like Akkermansia muciniphila and improve response to immunotherapy. They also plan to study whether analysis of a patient’s microbiome can be used to predict their response to specific therapies.

“While more research is needed, we may one day be able to analyze a patient’s microbiome to determine the best course of treatment or even influence the microbiome to improve outcomes,” says Dr. Burton. “This could lead to a new frontier in personalized medicine.”

The study was made possible through the generous support of The W. Garfield Weston Foundation, St. Joseph’s Health Care Foundation and the Canadian Urologic Oncology Group.

Lawson Health Research Institute is one of Canada’s top hospital-based research institutes, tackling the most pressing challenges in health care. As the research institute of London Health Sciences Centre and St. Joseph’s Health Care London, our innovation happens where care is delivered. Lawson research teams are at the leading-edge of science with the goal of improving health and the delivery of care for patients. Working in partnership with Western University, our researchers are encouraged to pursue their curiosity, collaborate often and share their discoveries widely. Research conducted through Lawson makes a difference in the lives of patients, families and communities around the world.

ABOUT SCHULICH SCHOOL OF MEDICINE & DENTISTRY