Researchers at the University of Toronto and University Health Network have shown how probiotic bacteria in the gut could undermine immunity in pancreatic cancer, pointing toward more personalized cancer treatments. 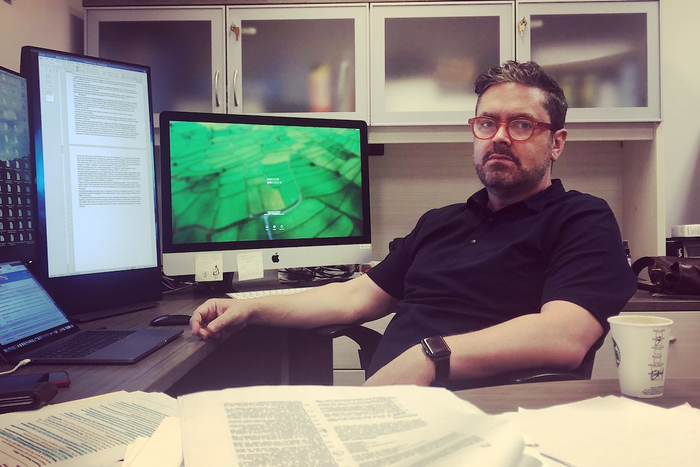 Credit: Courtesy of U of T and UHN

Researchers at the University of Toronto and University Health Network have shown how probiotic bacteria in the gut could undermine immunity in pancreatic cancer, pointing toward more personalized cancer treatments.

Lactobacillus — a type of bacteria thought to promote gut health — can alter the function of immune cells called macrophages in the pancreatic tumour environment and spur cancer growth, the researchers found.

Macrophages are tissue-resident immune cells thought to play an important role in tumour growth and metastasis. The researchers showed that Lactobacillus affects macrophage function by metabolizing dietary tryptophan, an essential amino acid found in protein from plant- and animal-based foods.

Indoles, a class of metabolites resulting from microbial tryptophan metabolization, activate the aryl hydrocarbon receptor, or AHR — a protein that regulates gene expression, and which can enable both beneficial inflammation and immune suppression in other areas of the body.

Deletion or inhibition of AHR in macrophages led to reduced growth of pancreatic cancer, better sensitivity to treatments and increased numbers of inflammatory T cells, the researchers found. The activation of AHR thwarted these beneficial effects.

McGaha said he was surprised the microbiome had such a strong impact on AHR and immune function. “We weren’t thinking about the microbiome at first, we were just interested in AHR as a factor in the tumour microenvironment,” McGaha said. “But when we blocked the mammalian genes that can activate AHR, it had no effect.”

The researchers then looked to Lactobacillus in part because previous studies had shown that the bacteria correlated with AHR activity and reduced inflammation, both of which can enable cancer growth.

They tested the effects of the bacteria in mice with surgical models of pancreatic cancer, working in U of T’s germ-free animal facility and in collaboration with Dana Philpott, also a professor of immunology.

They also moved the project forward with single cell analysis — a technology that provides genome-scale data on individual cells, and which McGaha said was a big draw when he moved to Toronto from the U.S. in 2015.

“The technology was new then, but it’s been invaluable for us to see population responses in the gene expression patterns of macrophages and other immune cells, and what’s going on around them.”

Pancreatic cancer is notoriously difficult to treat. It is the third-most deadly cancer in Canada, despite being relatively rare, and patients with the disease have not seen the gains in survival common in other cancers over the last three decades.

To help address the urgent need for more effective treatments, McGaha is working with clinician scientists at UHN on a clinical trial called PASS-01. The study is a collaboration with other Canadian and U.S. cancer centres that aims to uncover personalized predictors of patient response to chemotherapy.

The team will collect stool samples before and after chemotherapy to look for enrichment of Lactobacillus, and whether the bacteria correlates to treatment response, patient survival and their observations on how it acts in the tumour environment.

“It’s exciting as a basic scientist to be involved in translational research, and it’s been nice to see the physician scientists interested in this work,” McGaha said.

Longer term, said McGaha, his lab will pursue a deeper understanding of how immune cells interact with the microbiome. The hope is to improve on promising therapies such as fecal microbiota transplants, which have been hampered by the complexity and variety of gut bacteria — or to try a new approach.

“It could be possible to bypass the need to manipulate the microbiome, through precise targeting of the immune response to microbial metabolites,” said McGaha. “That’s a cool new direction we’d like to explore.”