Greener days ahead for carbon fuels

Researchers discover copper has potential as a catalyst for turning carbon dioxide into sustainable chemicals and fuels without any wasteful byproducts, creating a green alternative to present-day chemical manufacturing 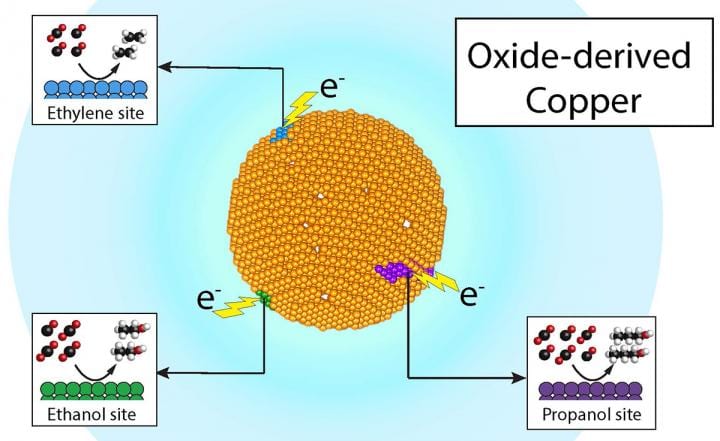 For decades, scientists have searched for effective ways to remove excess carbon dioxide emissions from the air, and recycle them into products such as renewable fuels. But the process of converting carbon dioxide into useful chemicals is tedious, expensive, and wasteful and thus not economically or environmentally viable.

Now a discovery by researchers at the U.S. Department of Energy’s Lawrence Berkeley National Laboratory (Berkeley Lab) and Joint Center for Artificial Photosynthesis (JCAP) shows that recycling carbon dioxide into valuable chemicals and fuels can be economical and efficient – all through a single copper catalyst.

The work appears in the Dec. 17 edition of the journal Nature Catalysis.

Going where the action is: product-specific active sites

When you take a piece of copper metal, it may feel smooth to the touch, but at the microscopic level, the surface is actually bumpy – and these bumps are what scientists call “active sites,” said Joel Ager, a researcher at JCAP who led the study. Ager is a staff scientist in Berkeley Lab’s Materials Sciences Division and an adjunct professor in the Department of Materials Science and Engineering at UC Berkeley.

These active sites are where the magic of electrocatalysis takes place: electrons from the copper surface interact with carbon dioxide and water in a sequence of steps that transforms them into products like ethanol fuel; ethylene, the precursor to plastic bags; and propanol, an alcohol commonly used in the pharmaceutical industry.

Ever since the 1980s, when copper’s talent for converting carbon into various useful products was discovered, it was always assumed that its active sites weren’t product-specific – in other words, you could use copper as a catalyst for making ethanol, ethylene, propanol, or some other carbon-based chemical, but you would have to go through a lot of steps to separate unwanted, residual chemicals formed during the intermediate stages of a chemical reaction before arriving at your final destination – the chemical end-product.

“The goal of ‘green’ or sustainable chemistry is getting the product that you want during chemical synthesis,” said Ager. “You don’t want to separate things you don’t want from the desirable products, because that’s expensive and environmentally undesirable. And that expense and waste reduces the economic viability of carbon-based solar fuels.”

So when Ager and co-author Yanwei Lum, who was a UC Berkeley Ph.D. student in Ager’s lab at the time of the study, were investigating copper’s catalytic properties for a solar fuels project, they wondered, “What if, like photosynthesis in nature, we could use electrons from solar cells to drive specific active sites of a copper catalyst to make a pure product stream of a carbon-based fuel or chemical?” Ager said.

Tracing a chemical’s origins through its ‘passport’

Previous studies had shown that “oxidized” or rusted copper is an excellent catalyst for making ethanol, ethylene, and propanol. The researchers theorized that if active sites in copper were actually product-specific, they could trace the chemicals’ origins through carbon isotopes, “much like a passport with stamps telling us what countries they visited,” Ager said.

“When we thought of the experiment, we thought that this is such an inobvious idea, that it would be crazy to try it,” Ager said. “But we couldn’t let it go, because we also thought it would work, as our previous research with isotopes had enabled us to discover new reaction pathways.”

So for the next few months, Lum and Ager ran a series of experiments using two isotopes of carbon, carbon-12 and carbon-13, as “passport stamps.” Carbon dioxide was labeled with carbon-12, and carbon monoxide – a key intermediate in the formation of carbon-carbon bonds – was labeled with carbon-13. According to their methodology, the researchers reasoned that the ratio of carbon-13 versus carbon-12 found in a product would determine from which active sites the chemical product originated.

After Lum ran dozens of experiments and used state-of-the-art mass spectrometry and NMR (nuclear magnetic resonance) spectroscopy at JCAP to analyze the results, they found that three of the products – ethylene, ethanol, and propanol – had different isotopic signatures showing that they came from different sites on the catalyst. “This discovery motivates future work to isolate and identify these different sites,” Lum said. “Putting these product-specific sites into a single catalyst could one day result in a very efficient and selective generation of chemical products,” Lum said.

Greener days ahead for chemical manufacturing

The researchers’ new methodology – what Ager describes as “straightforward chemistry with an environmental and economic twist” – is the beginning of what they hope could be a new beginning for green chemical manufacturing, where a solar cell could feed electrons to specific active sites within a copper catalyst to optimize the production of ethanol fuels.

“Perhaps one day this technology could make it possible to have something like an oil refinery, but powered by the sun, taking carbon dioxide out of the atmosphere and creating a stream of useful products,” he said.

The Joint Center for Artificial Photosynthesis is a DOE Energy Innovation Hub.

The work was supported by the DOE Office of Science.

DOE’s Office of Science is the single largest supporter of basic research in the physical sciences in the United States, and is working to address some of the most pressing challenges of our time. For more information, please visit the Office of Science website at http://science.energy.gov.

Optimizing restoration can deliver an eightfold increase in cost-effectiveness

Chemists have managed to stabilize the ‘capricious’ phosphorus