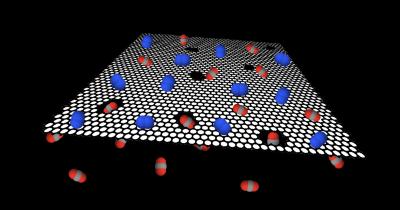 One of the main culprits of global warming is the vast amount of carbon dioxide pumped out into the atmosphere mostly from burning fossil fuels and the production of steel and cement. In response, scientists have been trying out a process that can sequester waste carbon dioxide, transporting it into a storage site, and then depositing it at a place where it cannot enter the atmosphere.

The problem is that capturing carbon from power plants and industrial emissions isn’t very cost-effective. The main reason is that waste carbon dioxide isn’t emitted pure, but is mixed with nitrogen and other gases, and extracting it from industrial emissions requires extra energy consumption – meaning a pricier bill.

Scientists have been trying to develop an energy-efficient carbon dioxide-filter. Referred to as a “membrane”, this technology can extract carbon dioxide out of the gas mix, which can then be either stored or converted into useful chemicals. “However, the performance of current carbon dioxide filters has been limited by the fundamental properties of currently available materials,” explains Professor Kumar Varoon Agrawal at EPFL’s School of Basic Sciences (EPFL Valais Wallis).

Now, Agrawal has led a team of chemical engineers to develop the world’s thinnest filter from graphene, the world-famous “wonder material” that won the Physics Nobel in 2010. But the graphene filter isn’t just the thinnest in the world, it can also separate carbon dioxide from a mix of gases such as those coming out of industrial emissions and do so with an efficiency and speed that surpasses most current filters. The work is published in Science Advances.

“Our approach was simple,” says Agrawal. “We made carbon dioxide-sized holes in graphene, which allowed carbon dioxide to flow through while blocking other gases such as nitrogen, which are larger than carbon dioxide.” The result is a record-high carbon dioxide-capture performance.

For comparison, current filters are required to exceed 1000 gas permeation units (GPUs), while their carbon-capturing specificity, referred to as their “carbon dioxide/nitrogen separation factor” must be above 20. The membranes that the EPFL scientists developed show more than ten-fold higher carbon dioxide permeance at 11,800 GPUs, while their separation factor stands at 22.5.

“We estimate that this technology will drop the cost of carbon capture close to $30 per ton of carbon dioxide, in contrast to commercial processes where the cost is two-to-four time higher,” says Agrawal. His team is now working on scaling up the process by developing a pilot plant demonstrator to capture 10 kg carbon dioxide per day, in a project funded by the Swiss government and Swiss industry.