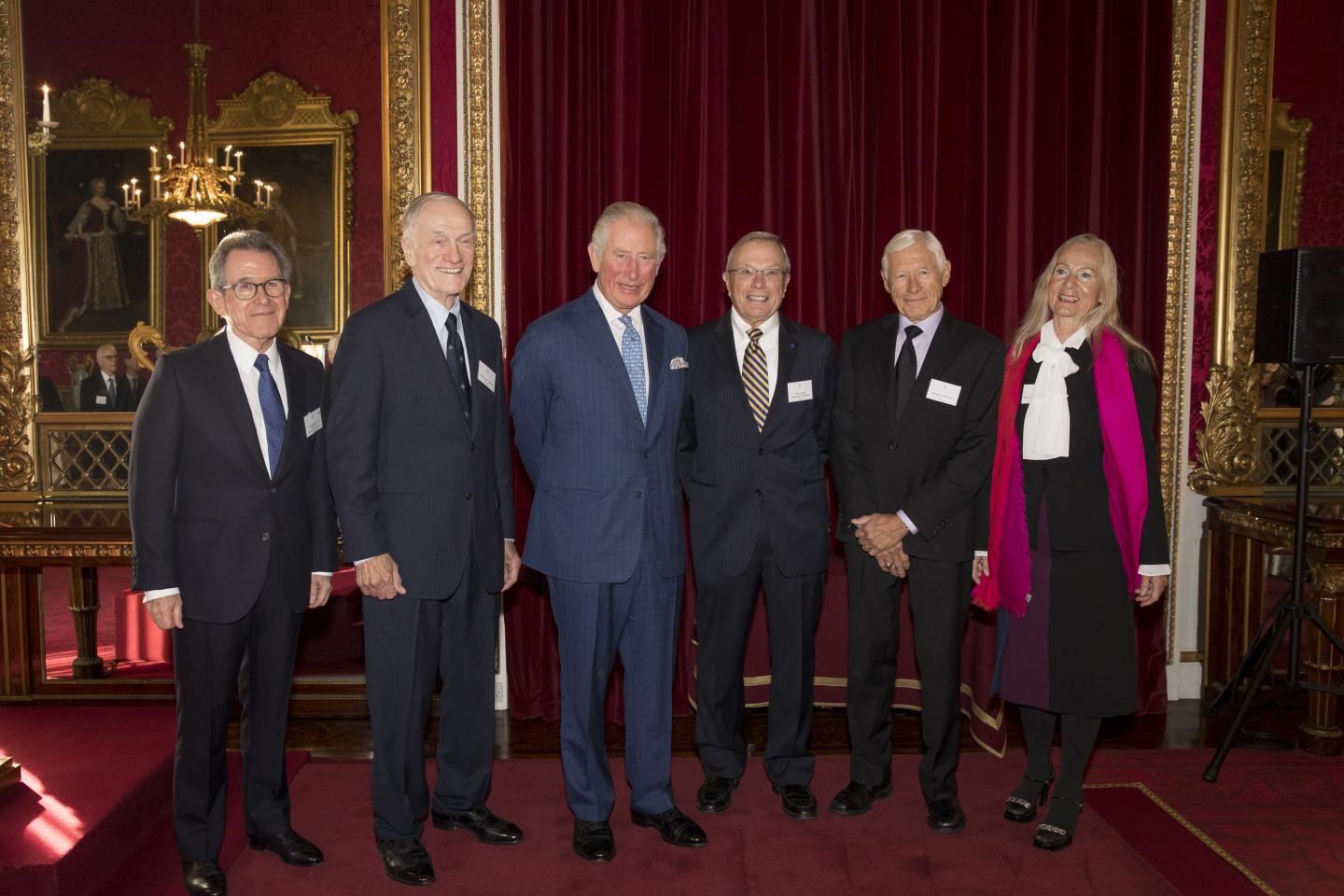 Today, four US engineers were awarded the 2019 Queen Elizabeth Prize for Engineering (QEPrize) during a ceremony at Buckingham Palace for their work creating the first truly global, satellite-based positioning system, GPS. The QEPrize is the world’s most prestigious engineering accolade, a £1 million prize that celebrates the global benefit of engineering innovation on humanity.

His Royal Highness The Prince of Wales presented the trophy to Dr Bradford Parkinson, Hugo Fruehauf, Richard Schwartz, and Anna Marie Spilker, who accepted the award on behalf of her late husband, Professor James Spilker, Jr.

Dr Bradford Parkinson–often regarded as the “father of GPS”–led the development, design, and testing of the system. Hugo Fruehauf developed a highly accurate, miniaturized atomic clock, a foundational component of the system. Richard Schwartz engineered a satellite hardened to resist intense radiation in space, with a lifespan three times greater than expected. Professor James Spilker, Jr, was the main designer of the GPS civil signal and, with his team at Stanford Telecommunications, built the receiver that processed the first GPS satellite signals.

Lord Browne, Chairman of the Queen Elizabeth Prize for Engineering Foundation, highlighted the critical role of collaboration in engineering, and in groundbreaking innovations such as GPS: “Our laureates’ success was the result of inter-disciplinary collaboration, a drive for excellence, and an ability to turn the fruits of scientific discovery into practical solutions. That is what engineers do,” he said.

Today, an estimated four billion people around the world use GPS. At just $2 per receiver, GPS provides an accessible service and a powerful tool that people can integrate with their applications. Simple smartphone apps can track disease outbreaks, self-driving tractors can optimize crop harvests, and sports teams can improve team performance. New applications for GPS continue to revolutionize entire industries, and its annual economic value has been estimated to be $80 billion for the USA alone.

GPS combines a constellation of at least 24 orbiting satellites with ground stations and receiving devices. Each satellite broadcasts a radio signal containing its location and the time from an extremely accurate onboard atomic clock. GPS receivers need signals from at least four satellites to determine their position; they measure the time delay in each signal to calculate the distance to each satellite, then use that information to pinpoint the receiver’s location on earth.

This year’s QEPrize trophy was designed by 17-year-old Jack Jiang from Hong Kong. Jack’s elegant trophy design won the 2019 Create the Trophy competition, an international competition that invites those aged between 14-24 around the world to submit innovative trophy designs for the world’s leading engineers. The 2019 competition saw a record number of entries, with submissions stemming from over 50 countries worldwide.

Lord Browne of Madingley, Chairman of the Queen Elizabeth Prize for Engineering Foundation, said: “This year’s laureates have demonstrated that engineering makes things happen. With the first global, satellite-based positioning system, they created an engineered system which provides free, immediate and accurate information about position and time, anywhere around the globe.

“The world now depends on GPS completely and without exception.

“The high-frequency trading systems, telecommunications and electricity grids of today are all built around GPS. And we will rely on it for the drone delivery systems, self-driving cars and climate monitoring solutions of tomorrow.

“In honoring the 2019 prize winners, we hope to inspire the next generation of engineers to continue to push back the frontiers of the possible.”

Bradford Parkinson said: “Today marks a landmark moment in all of our lives–there is no prize for engineering greater than this, it is an honor. This recognition reflects the responsibility incumbent upon those developing technology today to strive to do so for the good of humanity. Day-after-day, we are astounded at the new ways in which people across the world use GPS. It is a ‘System for Humanity’ in each and every sense.”

Hugo Fruehauf said: “The accuracy of modern GPS satellites astounds me. The atomic clocks we built for the satellites were accurate to within billionths of a second, but today’s generation are working a factor of 100 times better than that. They’re a lot like wine, in a sense–they only get better with time. And they have to be accurate; the timing for GPS is used for core systems around the world–vital infrastructure like banking systems, telecommunications networks, and power grids. Today the world relies on those clocks.”

Richard Schwartz said: “One of the best things about GPS is its accessibility. We designed the system to produce a signal that anyone can use, regardless of where they are on the planet. Today, engineers around the world can still access that signal, for free, and use it to build creative solutions to benefit people around them. It took a great deal of collaboration to make the system work, and it’s great to see the next generation collaborating on innovative products now because of that.”

Anna Marie Spilker, on behalf her late husband, Professor James Spilker, Jr, said: “Jim’s mission statement has always been to create, teach, and mentor for world-changing benefits to humanity through his engineering talents. When working on GPS, Jim knew that it could be of profound benefit globally, and he was right; because of their work, Jim and his colleagues have helped billions of people around the world. He was immensely proud of that. He said many times that ‘Engineering technology is the necessary catalyst for progress to world changing benefits to humanity; it’s magic.'”

Oncotarget Targeting PI3Kβ alone and in combination with chemotherapy or…