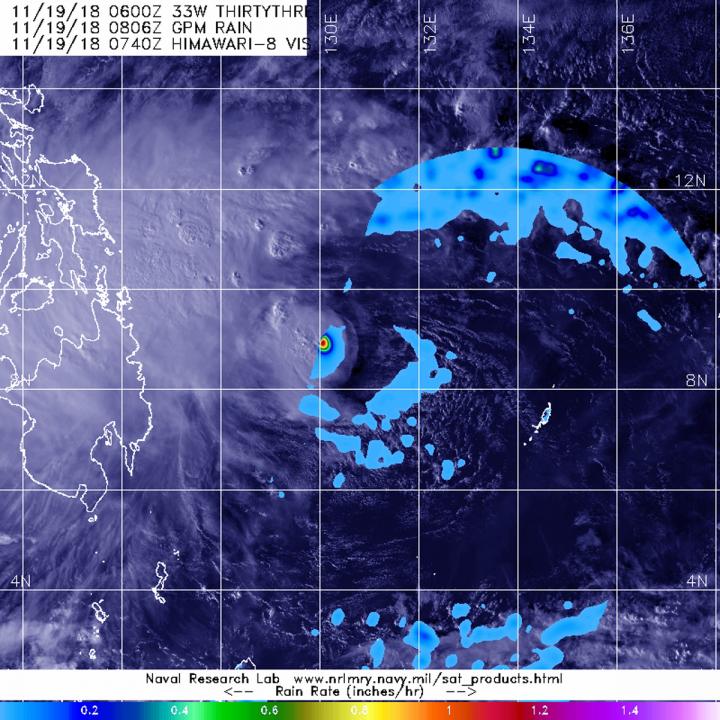 The Global Precipitation Measurement mission or GPM core satellite is providing data on rain rates within Tropical Cyclone 33W as it moves over the Philippines on Nov. 19.

Tropical Depression 33W is about to traverse the south-central Philippines. In the Philippines, 33W is designated “Samuel.”

The GPM satellite passed over the eastern half of Tropical Depression 33W on Nov. 19 at 3:06 a.m. EST (0806 UTC) and measured the rainfall rates. The heaviest rainfall was occurring around the center at a rate of 1.2 inches per hour while light rain was occurring throughout much of the eastern half of the storm. The bulk of the clouds and showers associated with 33W are located in the storm’s western quadrant.

GPM is a joint satellite mission between NASA and the Japan Aerospace Exploration Agency called JAXA.

Philippines storm signal 1 has been placed in effect for Luzon that includes Masbate, and for the Visayas region that includes Samar, Eastern Samar, Biliran, Leyte, Southern Leyte, Bohol, Cebu, Siquijor, Negros Oriental and Occidental. In the Mindanao region, Signal 1 is in effect for Surigao del Norte and Sur, Agusan del Norte and Sur, Dinagat Islands, Misamis Oriental and Camiguin

33W will move west-northwest, later west and into the South China Sea.