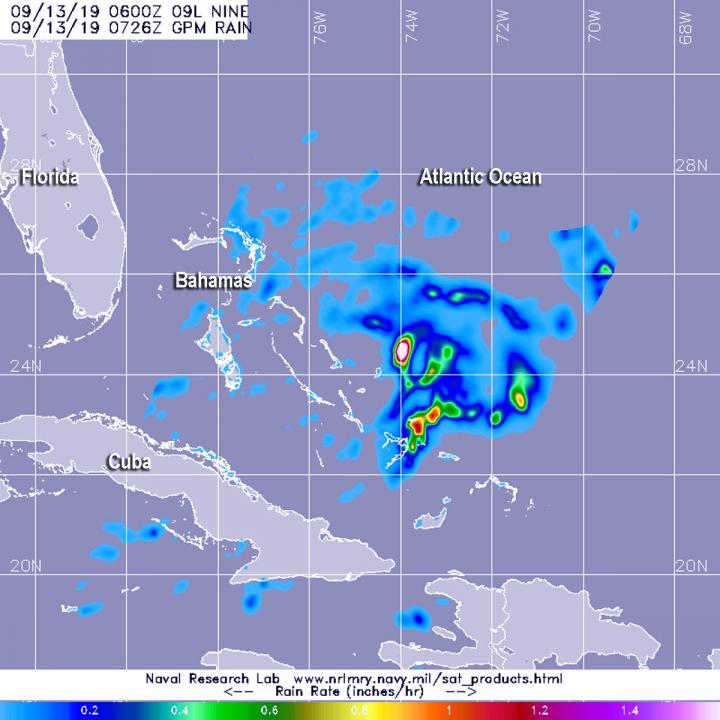 As the Bahamas continue to recover from Category 5 hurricane Dorian, a new developing tropical cyclone is bringing additional rainfall to an already soaked area.

The Global Precipitation Measurement mission or GPM core satellite provided a look at those rainfall rates occurring in Potential Tropical Cyclone Nine, located over the Bahamas.

Potential Tropical Cyclone 9 developed around 5 p.m. EDT on Thursday, Sept. 12. At 11 a.m. EDT on Sept. 13, the depression triggered watches and warnings from NOAA’s National Hurricane Center. A Tropical Storm Warning is in effect for the northwestern Bahamas excluding Andros Island and a Tropical Storm Watch is in effect from Jupiter Inlet to the Flagler-Volusia County line, Fla.

The GPM or Global Precipitation Measurement mission’s core satellite passed over Tropical Depression 9 on Sept. 13 at 2:26 a.m. EDT (0726 UTC). GPM found the heaviest rainfall northwest of the center where it was falling at a rate of over 40 mm (about 1.6 inch) per hour. GPM is a joint mission between NASA and the Japan Aerospace Exploration Agency, JAXA.

NOAA’s National Hurricane Center noted at 2 p.m. EDT (1800 UTC), the disturbance was centered near latitude 25.4 degrees north and longitude 74.2 degrees west. The system is expected to resume a slow motion toward the northwest and north-northwest later in the day. Maximum sustained winds are near 30 mph (45 kph) with higher gusts. The disturbance is forecast to become a tropical depression or a tropical storm later today or Saturday.

The potential tropical cyclone is expected to produce total rainfall accumulations through Sunday in the Bahamas of up to 2 to 4 inches, with isolated maximum amounts 6 inches. The U.S. Southeast Coast from central Florida into South Carolina can expect from 2 to 4 inches.

On the forecast track, the system is anticipated to move across the central and northwestern Bahamas today, and along or near the east coast of Florida Saturday and Saturday night.

How IL-6 allows the immune response to develop for a key cell, the T follicular helper