There is a correlation between dealing with COVID-19 and environmental disasters, and it is a negative one. A study conducted by a Brazilian scientist shows that the problem is due to both underinvestment and a lack of urban development policies to reduce the spatial distribution of vulnerability. 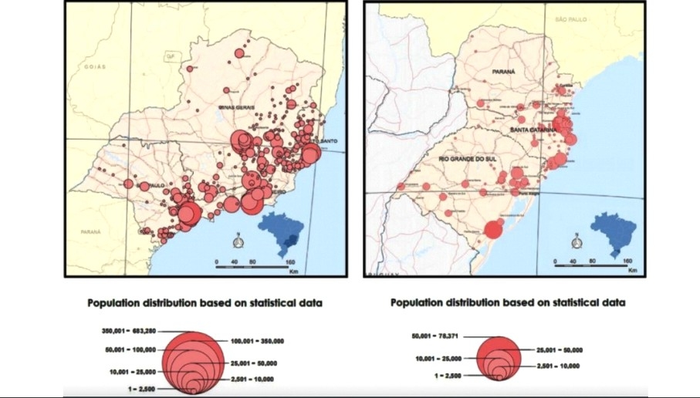 There is a correlation between dealing with COVID-19 and environmental disasters, and it is a negative one. A study conducted by a Brazilian scientist shows that the problem is due to both underinvestment and a lack of urban development policies to reduce the spatial distribution of vulnerability.

An article on the study is published in Sustainable Cities and Society. The author is Andrea Young, a researcher at the National Disaster Surveillance and Early Warning Center (CEMADEN) in Brazil. The study was supported by FAPESP.

The front-ranking cities in terms of both natural disasters and the impact of the pandemic were São Paulo, with 38,770 COVID-19 deaths in 2020, Rio de Janeiro, with 34,102, and Belo Horizonte, with 6,636. While acknowledging that investment in civil defense reduced the number of disasters in some cities compared with previous years, Young drew attention to the number of COVID-19 deaths in Campinas, the largest city in São Paulo State after the capital, with more than 4,000 deaths, Santo André and São Bernardo in metropolitan São Paulo and São Gonçalo in metropolitan Rio de Janeiro, with more than 3,000 each, and important port cities such as Santos (São Paulo) and Joinville (Santa Catarina), with 2,000 deaths each.

Discontinuity of investments and programs

The study also identified a correlation between transfers of funds for measures to combat the effects of disasters and the pandemic. In this case, there was not enough data on the 45 cities, and Young focused on São Paulo. Her case study of Brazil’s largest city showed that the same neighborhoods were most affected by the pandemic and most at risk from disasters.

“In the early days of the pandemic, the federal government offered money to support households, as well as aid to businesses, albeit less so. This was before all the confusion over vaccine purchases in 2020. In 2021, however, the health budget abruptly fell,” she said.

According to data from the National Treasury, the federal budget for emergency spending on COVID-19 was equivalent to USD 115 billion in 2020 and USD 26 billion in 2021.

There has been a similar discontinuity of funding to address the impact of climate change in the last ten years. “When an environmental disaster occurs, emergency funds are always transferred quickly, but once the immediate problem is over, the funding is cut off and the action plan discontinued,” she said. “The structural problems remain and will again come to the fore with the next rainstorm or drought, or with the next wave of the same disease or a new epidemic.”

Cities are more concerned to rebuild areas affected by disasters than investing in greater resilience. “Most of the cities invest in concrete, asphalt, dykes, and reservoirs rather than reforestation and sanitation, for example,” Young said. “Reconstruction of these areas ends up consisting of gray structures and not structures designed with a safer environment in mind, so clearly they remain vulnerable.”

Funds for these activities are not wisely spent. “The money isn’t well-spent because the infrastructure in question is gray and costs more than green projects such as restoration of forests or mangroves,” she said.

The same applies to the measures taken to manage the pandemic. “Spending to buy vaccines in 2020 was the lowest of all, showing sluggishness or lack of interest in vaccinating the population as quickly as possible. In August 2021, USD 10 billion had been allocated to vaccines, and only USD 2.5 billion had been disbursed, while the total emergency budget for the city was USD 112.5 billion. Government inaction is similar in any emergency,” Young said.

The study found the same weaknesses and opportunities in its comparison of action to address COVID-19 and disasters. “In São Paulo, each neighborhood reacted differently to COVID-19. Some of the poor outlying districts responded rapidly using their own mutual aid networks. An example is Paraisópolis. Others are isolated in the southern part of the city [where population density is lower] and were severely hampered by deficient mass transit and weak networks among inhabitants,” Young said.

Resilience depends not just on infrastructure but also on local community networking and communication, she added. In her view, the study clearly shows that government responses to the pandemic and climate change should be linked to technology, urban intelligence and nature-based solutions.

“It’s not that spending is insufficient but that the money isn’t spent where it’s most needed,” Young said. “Some neighborhoods had more cases of COVID-19 because sanitation was bad. Similarly for natural disasters. Wouldn’t it be better to focus on this problem from now on, taking adequate measures and hence economizing resources? After all, knowing where the problem is and prioritizing it is a way to economize.”

The actions that have made neighborhoods more resilient should be analyzed and monitored, Young believes. It is also important to make sure funding does not cease. “Right now we need to pay attention to the SUS [the national health system], for if the federal government starts to cut its budget – which would be illegal, as it’s constitutionally mandatory – we’ll see discontinuity of funding and planning yet again. The result will be a deficit,” she said.

From federal transfers and local investments to a potential convergence of COVID-19 and climate change: The case study of São Paulo city