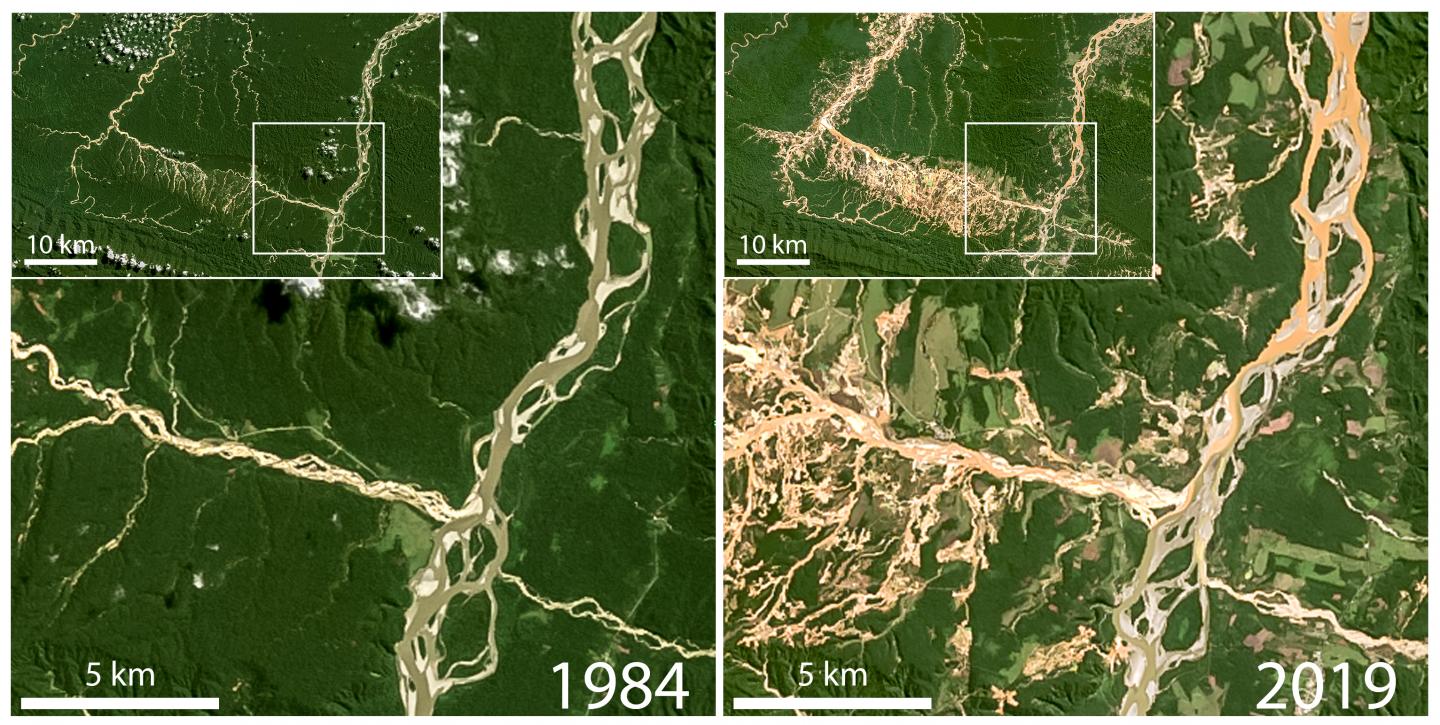 A Dartmouth study finds that artisanal-scale gold mining is altering water clarity and dynamics in the Madre de Dios River watershed in Peru, a tropical biodiversity hotspot. Higher levels of suspended sediment were found in rivers near the mining sites, with increasing impacts as mining has become more widespread in the past two decades. The elevated sediment levels contain mercury and other contaminants, which can pose health risks to humans and have a detrimental impact on fish populations and other aquatic life. The findings are published in the Proceedings of the National Academy of Sciences.

Significant impacts to rivers were observed as a result of the artisanal scale gold mining, with as much as 10 times normal suspended sediment concentrations–a measurement of how many sediment particles are in the water. Though higher sediment concentrations were observed year-round, they were most pronounced during dry season, when undisrupted rivers in the region generally run clear, with low sediment concentrations as compared to the wet season. Most artisanal-scale gold mining in Madre de Dios is conducted during the dry season, as the heavy machinery that is required to clear the land for operations cannot be used during the wet season. As a result, the mining activity is triggering a reversal of natural seasonal cycles, turning clear water muddy and disrupting the hydrological activity of the riverine ecosystems.

Artisanal scale gold mining are intensive operations that leave a large environmental footprint. After land is cleared, sluices– which bring large amounts of water back into the cleared area, and/or settling ponds, are used to separate the sediment. Portions of the sediment are then often transferred into large containers of liquid mercury, which is used to help amalgamate the flakes of gold. The mercury in the amalgam is then burned off until only the pure gold is left behind. Through these processes, mercury enters the rivers and streams.

The increased sediment in the rivers and its association with mercury contamination combine to pollute rivers downstream of gold mining operations. As the study explains, water clarity is associated with the community structures of many neotropical fish. Increased sediment levels directly result in higher river turbidity, preventing light from penetrating through the water and decreasing visibility. This has been shown to affects surface fish and invertivores, as well as migratory catfish who spawn during high-flow periods. Disrupting these riverine dynamics also impacts the habitat of other animals such as the endangered giant otter, Pteronura brasilensis, who also call the rivers home.

To examine the impact of artisanal scale gold mining, the researchers used satellite imagery from 1984 to 2018 at 32 river reaches in the Madre de Dios River watershed, which is located near the largest tributary to the Amazon, the Madeira River. The research team analyzed over 15,500 samples from 3,200+ NASA LandSat images, including images of the same sites through time. Based on the spectral reflectance properties of rivers and sediment, the estimated amount of sediment (e.g. the suspended sediment concentration) was calculated using algorithms developed for the study, and changes were tracked over the 34-year study period.

The findings demonstrated that 16 of 18 stretches of rivers near artisanal scale gold mining areas had higher levels of suspended sediment concentrations. By comparison, for the 14 sites studied that had not been affected by mining, only five were found to have higher levels of sediment over time. The increase in sediment found in rivers downstream of the artisanal scale gold mining areas was found to be related to the area of upstream land being mined. These operations are rapidly increasing in scope in many rivers in the region, including in nearby national parks, where mining is prohibited.

“Though these mining operations are called ‘artisanal’, they are occurring on a widespread scale, and our data shows that sediment introduced into the rivers of the Madre de Dios region is profoundly changing important natural systems,” explained lead author Evan N. Dethier, a graduate student in the department of earth sciences at Dartmouth. “Similar to deforestation for agriculture elsewhere in the Amazon, these mining operations are rapidly destroying pristine rainforest. However, we have found that gold mining has a far greater impact on river water quality than deforestation for agriculture, due to intensive sediment disruption directly in the rivers themselves, and through the use of mercury in the mining process.”

“The Madre de Dios River region is a tropical biodiversity hotspot that is one of the most understudied regions in the world. Artisanal scale gold mining is changing river water clarity, flow and dynamics. Whenever natural ecosystems are disrupted, the consequences may be severe,” said co-author David Lutz, a research assistant professor of environmental studies at Dartmouth. “Our research shows that artisanal scale gold mining is creating unnaturally high-levels of sediment for these systems, and that sediment is often laden with mercury and other contaminants. We just don’t know how these changes are impacting aquatic species but know that some of these riverine areas are being put in peril. We do know however, that many people in these remote, tropical areas rely on the fish from these rivers for food, and prior research has shown the human health risks associated with exposure to mercury,” explained Lutz.

Previous studies in the Amazon have often focused on the impacts of deforestation; however, this is one of the first to examine the aquatic impact– how tropical rivers and streams have and continue to be affected by this burgeoning industry.

The researchers hope that the study will encourage future multidisciplinary research on the impact of artisanal scale gold mining and help inform conservations efforts. The environmental impacts here are widespread, and in some cases, could be irreversible, a concern for a region that is known for its biodiversity.