Go with the flow: New findings about moving electricity could improve fusion devices

Researchers at the U.S. Department of Energy’s (DOE) Princeton Plasma Physics Laboratory (PPPL) have found that updating a mathematical model to include a physical property known as resistivity could lead to the improved design of doughnut-shaped fusion facilities known as tokamaks. 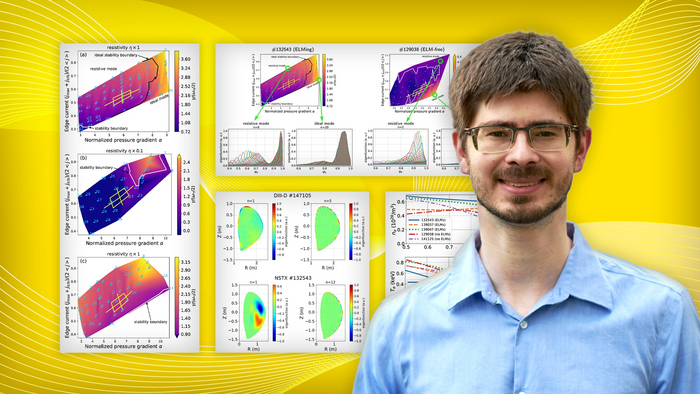 Researchers at the U.S. Department of Energy’s (DOE) Princeton Plasma Physics Laboratory (PPPL) have found that updating a mathematical model to include a physical property known as resistivity could lead to the improved design of doughnut-shaped fusion facilities known as tokamaks.

“Resistivity is the property of any substance that inhibits the flow of electricity,” said PPPL physicist Nathaniel Ferraro, one of the collaborating researchers. “It’s kind of like the viscosity of a fluid, which inhibits things moving through it. For example, a stone will move more slowly through molasses than water, and more slowly through water than through air.”

Scientists have discovered a new way that resistivity can cause instabilities in the plasma edge, where temperatures and pressures rise sharply. By incorporating resistivity into models that predict the behavior of plasma, a soup of electrons and atomic nuclei that makes up 99% of the visible universe, scientists can design systems for future fusion facilities that make the plasma more stable.

“We want to use this knowledge to figure out how to develop a model that allows us to plug in certain plasma characteristics and predict whether the plasma will be stable before we actually do an experiment,” said Andreas Kleiner, a PPPL physicist who was the lead author of a paper reporting the results in Nuclear Fusion. “Basically, in this research, we saw that resistivity matters and our models ought to include it,” Kleiner said.

Fusion, the power that drives the sun and stars, combines light elements in the form of plasma — the hot, charged state of matter composed of free electrons and atomic nuclei — and generates massive amounts of energy. Scientists seek to harness fusion on Earth for a virtually inexhaustible supply of power to generate electricity.

Scientists want the plasma to be stable because instabilities can lead to plasma eruptions known as edge-localized modes (ELMs) that can damage internal components of the tokamak over time, requiring those components to be replaced more frequently. Future fusion reactors will have to run without stopping for repairs, however, for months at a time.

“We need to have confidence that the plasma in these future facilities will be stable without having to build full-scale prototypes, which is prohibitively expensive and time-consuming,” Ferraro said. “In the case of edge-localized modes and some other phenomena, failing to stabilize the plasma could lead to damage or reduced component lifetimes in these facilities, so it’s very important to get it right.”

Physicists use a computer model known as EPED to predict the behavior of plasma in conventional tokamaks, but the predictions produced by the code for a variety of plasma machines known as spherical tokamaks are not always accurate. Physicists are studying spherical tokamaks, compact facilities such as the National Spherical Tokamak Experiment-Upgrade (NSTX-U) at PPPL that resemble cored apples, as a possible design for a fusion pilot plant.

Using the high-powered computers in the National Energy Research Scientific Computing Center, a DOE Office of Science user facility at Lawrence Berkeley National Laboratory in Berkeley, California, Kleiner and the team tried adding resistivity to a plasma model and found that the predictions started matching observations.

“Andreas examined the data from several previous plasma discharges and found that resistive effects were very important,” said Rajesh Maingi, head of PPPL’s Tokamak Experimental Sciences Department. “The experiments showed that these effects were probably causing the ELMs we were seeing. The improved model could show us how to change the profiles of plasma in future facilities to get rid of the ELMs.”

Using these types of computer models is a standard procedure that lets physicists predict what plasma will do in future fusion machines and design those machines to make the plasma behave in a way to make fusion more likely. “Basically, a model is a set of mathematical equations that describes plasma behavior,” Ferraro said.

“And all models incorporate assumptions. Some models, like the one used in this research, describe the plasma as a fluid. In general, you can’t have a model that includes all of physics in it. It would be too hard to solve. You want a model that is simple enough to calculate but complete enough to capture the phenomenon you are interested in. Andreas found that resistivity is one of the physical effects that we should include in our models.”

This research builds on past computations conducted by Kleiner and others. It adds to those findings by analyzing more discharges produced by NSTX, the machine preceding NSTX-U, and investigating scenarios when ELMs do not occur. The research also helped the scientists determine that instabilities caused by resistivity are driven by plasma current, not pressure.

Future research will focus on determining why resistivity produces these types of instabilities in spherical tokamaks. “We do not yet know which property causes the resistive modes at the plasma edge to appear. It might be a result of the spherical torus geometry, the lithium that coats the insides of some facilities, or the plasma’s elongated shape,” Kleiner said. “But this needs to be confirmed with further simulations.”

This research was funded by the DOE’s Office of Science (Fusion Energy Sciences). Collaborating institutions include the Instituto de Física at Brazil’s University of São Paulo.

Critical role of current-driven instabilities for ELMs in NSTX