Glaciers and enigmatic stone stripes in the Ethiopian highlands 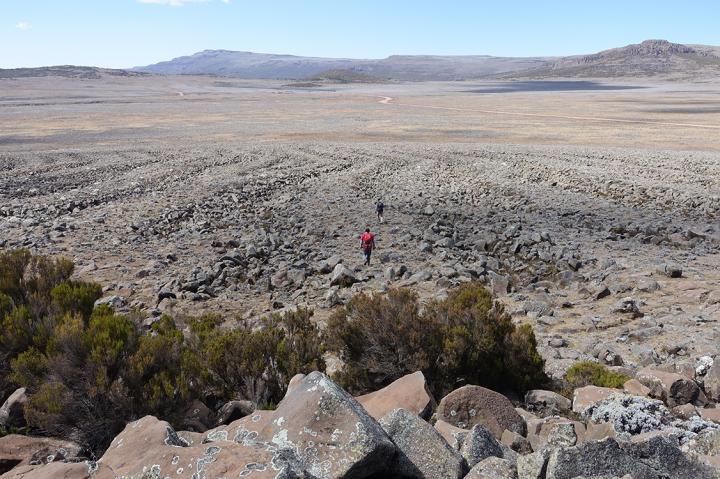 As the driver of global atmospheric and ocean circulation, the tropics play a central role in understanding past and future climate change. Both global climate simulations and worldwide ocean temperature reconstructions indicate that the cooling in the tropics during the last cold period, which began about 115,000 years ago, was much weaker than in the temperate zone and the polar regions. The extent to which this general statement also applies to the tropical high mountains of Eastern Africa and elsewhere is, however, doubted on the basis of palaeoclimatic, geological and ecological studies at high elevations.

A research team led by Alexander Groos, Heinz Veit (both from the Institute of Geography) and Naki Akçar (Institute of Geological Sciences) at the University of Bern, in collaboration with colleagues from ETH Zurich, the University of Marburg and the University of Ankara, used the Ethiopian Highlands as a test site to investigate the extent and impact of regional cooling on tropical mountains during the last glacial period. The results have been published in the scientific journals Science Advances and Earth Surface Dynamics.

Formation of plateau and valley glaciers

“The Ethiopian Highlands are currently not covered by ice, despite its elevation of over 4,000 m,” explains Groos, who studied the glacial, climatic and landscape history of the Bale and Arsi Mountains in the southern highlands as part of his dissertation. “Moraines and other land forms, however, attest to the fact that these mountains were glaciated during the last cold period,” he continues.

Moraine boulders in the Bale and Arsi Mountains were mapped and sampled in the field and later dated using the chlorine isotope “36Cl” to accurately determine the extent and timing of past glaciations. The researchers were in for a surprise: “Our results show that glaciers in the southern Ethiopian Highlands reached their maximum extent between 40,000 and 30,000 years ago,” says Groos, “several thousand years earlier than in other mountainous regions in Eastern Africa and worldwide.” In total, the glaciers in the southern highlands covered an area of more than 350 km² during their maximum. In addition to the cooling of at least 4 to 6 °C, the extensive volcanic plateaus above 4,000 m favored the development of glaciation in this magnitude.

The researchers gained important insights by comparing the specially reconstructed glacier fluctuations in the Ethiopian Highlands with those of the highest East African mountains and climate archives from the Great African Rift Valley. “The cross-comparisons show that the tropical mountains in Eastern Africa have experienced a more pronounced cooling than the surrounding lowlands,” Groos concludes. “Furthermore, the results suggest a nonuniform response by East African glaciers and ice caps to climate changes during the last cold period, which can be attributed to regional differences in precipitation distribution and mountain relief, among other factors,” he continues.

The enigma of the stone stripes

During their fieldwork on the central Sanetti Plateau in the Bale Mountains, the researchers also came across gigantic stone stripes (up to 1,000 m long, 15 m wide and 2 m deep) outside the area of the former ice cap. “The existence of these stone stripes on a tropical plateau surprised us, as so-called periglacial landforms of this magnitude were previously only known from the temperate zone and polar regions and are associated with ground temperatures around freezing point,” Groos said. However, the average ground temperature on the Sanetti Plateau is currently about 11 °C.

The large boulders and basalt columns that make up the stone stripes originally came from heavily eroded rock formations and volcanic plugs. As things stand, the researchers assume that the stone stripes were formed during the last glacial period through natural sorting of the previously chaotically distributed rocks in the course of the periodic freezing and thawing of the ground near the former ice cap. However, locally this would have required a drop in the mean ground temperature of at least 11 °C and in the mean air temperature of at least 7 °C. Whether this unprecedented cooling is a regional phenomenon or exemplary for the cooling of tropical high mountains during the last glacial period must be shown by future studies from other tropical mountain regions.