Like you and me, microbes need some metals in their diet to stay healthy. The metals help the microbes fully “digest” food. After a good meal, the microbes that gain energy by chemically reducing nitrate release a harmless byproduct: nitrogen, the gas that makes up 78% of Earth’s atmosphere. 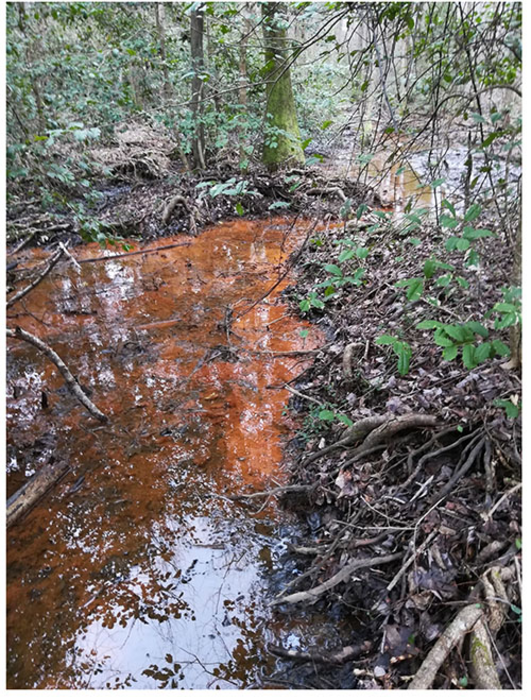 Like you and me, microbes need some metals in their diet to stay healthy. The metals help the microbes fully “digest” food. After a good meal, the microbes that gain energy by chemically reducing nitrate release a harmless byproduct: nitrogen, the gas that makes up 78% of Earth’s atmosphere.

Previous lab studies using pure cultures have shown that copper availability was important for denitrification. Now research from the lab of Daniel Giammar, the Walter E. Browne Professor of Environmental Engineering at the McKelvey School of Engineering, and Jeffrey Catalano, professor of earth and planetary sciences in Arts & Sciences, both at Washington University in St. Louis, has shown that in the complex, dynamic aquatic environments these microbes call home, there might not always be enough copper available for denitrification.

Their research was published June 15 in the journal Geochimica et Cosmochimica Acta.

“Material in a beaker is not the same as material in the environment,” Giammar said. “A big part of our approach was to take real materials from real environmental systems and bring them to the lab and look at them in controlled ways.”

The findings underscore the outsized role of copper when it comes to the release of nitrous oxide. “At regular, background levels, these systems may not have enough metals to carry out the process,” said Neha Sharma, a PhD student in Giammar’s lab.

That’s important because nitrous oxide is the third most potent greenhouse gas and 50% of it comes from microbes in aquatic ecosystems.

To better understand how copper affected the gas’s release in these systems, Sharma and Elaine Flynn, a senior scientist in Catalano’s lab, went to the source. Working with three U.S. Department of Energy (DOE) labs — Oak Ridge and Argonne national laboratories and the Savannah River Site — Sharma and Flynn collected microbes from wetlands and riverbeds. When they analyzed how much copper was in the systems, they realized it wasn’t enough to complete denitrification.

“Then we wanted to see, if we manually added copper, would it affect the release of nitrous oxide,” Sharma said. It did. “All of the nitrous oxide was converted into other things,” but no harmful greenhouse gases.

This finding could point to new ways to curb a warming atmosphere, Sharma said. “If we put a bit of metals into the natural systems, it might mitigate the release of N2O,” she said. It also could have a more immediate effect for researchers who study climate.

“Currently, models that are predicting the release of gases from various systems do not account for these factors,” Sharma said. “They know factors like food availability or temperature might affect greenhouse gas release, but they don’t include the effect of metals on this aspect of greenhouse gases.”

Extreme complexity
For people to truly understand and make useful predictions about climate, climate models need to incorporate all of the real-world complexity present in specific ecosystems.

Another study, published in May in the journal ACS Earth & Space Chemistry, analyzed the behaviors of four different metals from riparian wetland soils from the Savannah River Site and stream sediments near the Oak Ridge National Laboratory.

The research team, including Sharma and Zixuan Wang, a PhD student in the lab of Zhen “Jason” He, professor of energy, environmental and chemical engineering, wanted to know if the metals’ availability changed when the metals were underwater (and there was little oxygen) versus when they were exposed to the air.

The team had reasons to believe that the four metals — all important for microbes’ biochemical reactions — might all act similarly. To their surprise, however, the metals acted differently in similar situations.

“This means the bioavailability of certain metals changes with seasons,” Sharma said. “It just highlights the extreme complexity of natural systems.”

Capturing that complexity calls for a variety of specialists and partners.

“We’re environmental engineers, we’re always thinking ‘why does this matter? What’s this going to do for the climate? What can be done?’” Giammar said. “But also, we collaborated with primary investigator Jeffrey Catalano,” which gave the work a strong geochemistry perspective.

Along with receiving funding and access to watersheds from the DOE laboratories, this research is also contributing to the DOE’s knowledge base.

It provides one more piece of the puzzle of “watershed function,” the study of the biogeochemical functions or watersheds and their inhabitants. Meanwhile, other researchers in other fields do the same.

Together, knowledge can change the way people understand the watershed’s relationship to climate.

“If anything, we saw the copper limitation was a bigger deal than we thought,” Giammar said. “That’s why I think getting into this environmental complexity is important.”