Giant predatory worms roamed the seafloor until 5.3 million years ago

The seafloor was inhabited by giant predatory worms until 5.3 million years ago 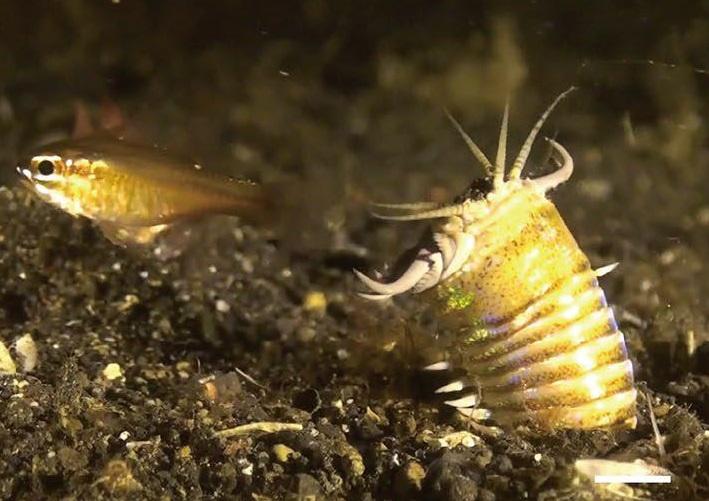 An international study in which the University of Granada participated–recently published in the journal Scientific Reports–has identified a new fossil record of these mysterious animals in the northeast of Taiwan (China), in marine sediments from the Miocene Age (between 23 and 5.3 million years ago)

These organisms, similar to today’s Bobbit worm (Eunice aphroditois), were approximately 2 m long and 3 cm in diameter and lived in burrows

An international study in which the University of Granada (UGR) participated (recently published in the prestigious journal Scientific Reports) has revealed that the seafloor was inhabited by giant predatory worms during the Miocene Age (23-5.3 million years ago).

The scientists identified a new fossil record (indirect remains of animal activity such as, for instance, dinosaur tracks, fossilised droppings, insect nests, or burrows) linked to these mysterious animals, which are possible predecessors of today’s Bobbit worm (Eunice aphroditois). Based on the reconstruction of giant burrows observed in Miocene-age marine sediments from northeast Taiwan (China), the researchers concluded that these trace fossils may have colonised the seafloor of the Eurasian continent about 20 million years ago.

Olmo Míguez Salas of the UGR’s Department of Stratigraphy and Palaeontology (Ichnology and Palaeoenvironment Research Group) participated in the study, which was conducted as part of a project funded by the Taiwanese Ministry of Science and Technology (MOST, 2018) of which the researcher was a beneficiary.

Míguez Salas and the other researchers reconstructed this new fossil record, which they have named Pennichnus formosae. It consists of an L-shaped burrow, approximately 2 m long and 2-3 cm in diameter, indicating the size and shape of the organism– Eunice aphroditois–that made the structure.

Bobbit worms hide in long, narrow burrows in the seafloor and propel themselves upward to grab prey with their strong jaws. The authors suggest that the motion involved in capturing their prey and retreating into their burrow to digest it caused various alterations to the structure of the burrows. These alterations are conserved in the Pennichnus formosae and are indicative of the deformation of the sediment surrounding the upper part of the burrow. Detailed analysis revealed a high concentration of iron in this upper section, which may, the researchers believe, indicate that the worms continuously rebuilt the opening to the burrow by secreting a type of mucus to strengthen the wall, because bacteria that feed on this mucus create environments rich in iron.

Although marine invertebrates have existed since the early Paleozoic, their bodies primarily comprise soft tissue and are therefore rarely preserved. The fossil record discovered in this study is believed to be the earliest known specimen of a subsurface-dwelling ambush predator.

Olmo Míguez Salas notes that this finding “provides a rare view of the behaviour of these creatures under the seafloor and also highlights the value of studying fossil records to understand the behaviour of organisms from the past.”