Getting hydrogen out of banana peels

As the world’s energy demands increase, so does our consumption of fossil fuels. The result is a massive rise in greenhouse gases emissions with severely adverse environmental effects. To address this, scientists have been searching for alternative, renewable sources of energy. 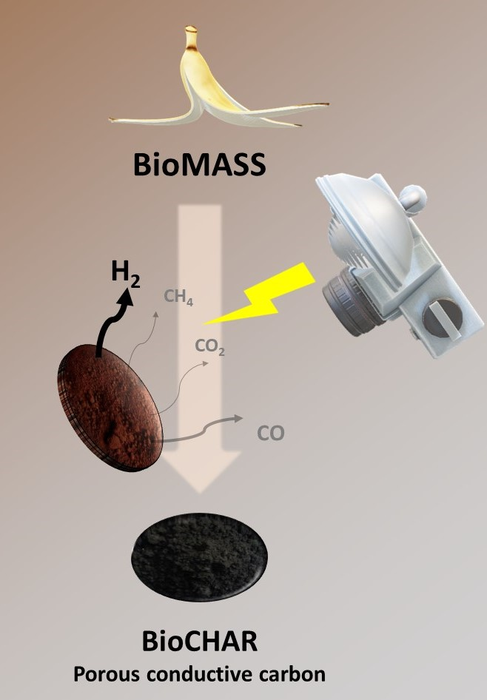 As the world’s energy demands increase, so does our consumption of fossil fuels. The result is a massive rise in greenhouse gases emissions with severely adverse environmental effects. To address this, scientists have been searching for alternative, renewable sources of energy.

A main candidate is hydrogen produced from organic waste, or “biomass”, of plants and animals. Biomass also absorbs, removes, and stores CO2 from the atmosphere, while biomass decomposition can also bring us ways to negative emissions or greenhouse gases removal. But even though biomass heralds a way forward, there is still the question of the best way to maximize its conversion into energy.

There are currently two main methods for converting biomass into energy: gasification and pyrolysis. Gasification puts solid or liquid biomass at temperatures around 1000°C, converting it into gas and solid compounds; the gas is called “syngas” while the solid is “biochar”.

Syngas is a mix of hydrogen, methane, carbon monoxide and other hydrocarbons, and those are what are used as “biofuel” to generate power. On the other hand, biochar is often regarded as a solid carbon waste, although it can be used in agriculture applications.

The other method, biomass pyrolysis, is similar to gasification except that biomass is heated at lower temperatures, between 400-800°C and at pressures up to 5 bar in an inert atmosphere. There are three types of pyrolysis: conventional, fast, and flash pyrolysis. Out of all three, the first two take the longest time, and have the most char production.

Flash pyrolysis takes place at 600°C and produces the most syngas and has the lowest residence time. Unfortunately, it also needs specialized reactors that can handle high temperatures and pressures.

Now, scientists led by Professor Hubert Girault at EPFL’s School of Basic Sciences have developed a new method for biomass photo-pyrolysis that produces not only valuable syngas, but also a biochar of solid carbon that can be repurposed in other applications. The work is published in Chemical Science.

The lamp’s white flash light provides a high-power energy source as well as short pulses that promote photo-thermal chemical reactions. The idea is to generate a powerful flash light shot, which the biomass absorbs and which instantaneously triggers a photothermal biomass conversion into syngas and biochar.

This flashing technique was used on different sources of biomass: banana peels, corn cobs, orange peels, coffee beans and coconut shells, all of which were initially dried at 105°C for 24 hours and then ground and sieved to a thin powder. The powder was then placed in a stainless-steel reactor with a standard glass window at ambient pressure and under an inert atmosphere. The Xenon lamp flashes, and the whole conversion process is over in few milliseconds.

“Each kg of dried biomass can generate around 100 liters of hydrogen and 330g of biochar, which is up to 33wt.% of the original dried banana peel mass,” says Bhawna Nagar, who worked on the study. The method also had a positive calculated energy outcome of 4.09 MJ·per kg of dried biomass.

What stands out in this method is that both its end products, hydrogen and solid-carbon biochar, are valuable. The hydrogen can be used as green fuel, while the carbon biochar, can either be buried and used as a fertilizer or it can be used to manufacture conductive electrodes.

“The relevance of our work is further heightened by the fact that we are indirectly capturing CO2 stores from the atmosphere for years,” says Nagar. “We have converted that into useful end products in no time using a Xenon flash lamp.”