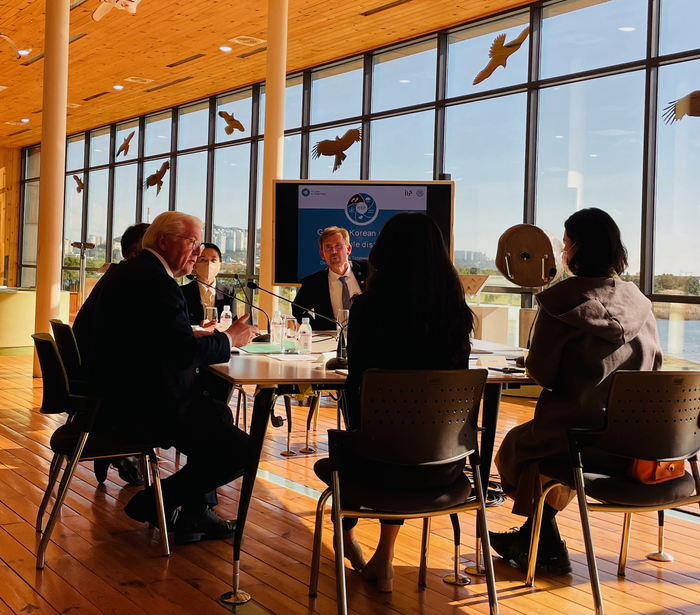 Overlooking the breathtaking scenery of the Nakdong Estuary near Busan, a group of Korean climate activists from Green Environment Youth Korea (GEYK), scientists from the IBS Center for Climate Physics (ICCP) at Pusan National University, South Korea and the Potsdam Institute for Climate Impact Research (PIK), Germany met with the German Federal President Frank-Walter STEINMEIER to discuss the climate crisis. Busan was the last stop in Frank-Walter STEINMEIER’s official visit to South Korea.

In his introductory remarks the German president expressed his concerns, that the expensive confrontations between countries may slow down efforts to reach carbon neutrality in time. “This is the same money we need to fight climate change,” he said.

Dr. KWON Eun-Young (ICCP), a member of the roundtable panel, summarized what scientists have learned in the last years about ocean acidification, which sometimes is also referred to as the second carbon problem. As humans emit more CO2, about 30% percent of it is taken up by the world’s oceans where it causes a chemical reaction, that can disrupt marine life for calcifying organisms. Even though the anticipated impacts on marine ecosystems could become disastrous, this subject has so far received little attention from the general public.

The group then discussed the issue of the record-breaking rainfall and flooding events that took place in Germany in 2021 and in South Korea on August 8th, 2022. The latest supercomputer model simulations from the ICCP clearly show that – unless CO2 is drastically reduced – extreme flooding in Germany and Korea will occur 2-4 times more often over the next 70 years. When asked, what Germany had learned from the flooding in 2021, President Steinmeier responded that in the aftermath of this tragic event cooperation and solidarity among people were most important.

The panel then moved on to discuss so-called compound events, which refer to the simultaneous manifestation of environmental stressors, such as global sea level rise, storm surges, high tides, and extreme rainfall which can all occur during super-typhoons. Compound events can have catastrophic consequences for ecosystems, humans, and infrastructures.

The discussion led the way into the issue of global sea-level rise, climate injustice, and climate refugees. Prof. Anders LEVERMANN (PIK) described that even after successfully capping global mean temperatures in near future, sea level will very likely continue to rise for many more centuries, due to the processes occurring in the West-Antarctic ice sheet. Climate change not only has a global, but also a multi-generational legacy.

The panel, therefore, agreed that the young generation needs to be involved in the political decision-making process. Climate youth activists CHO Hyewon and PARK Hayoung (GEYK) proposed a cooperation program between Korean and German youth to find ways to better mitigate and respond to the climate crisis. “We must further raise awareness and create a social consensus. Holding film festivals, engaging artists and musicians, such as K-Pop stars, and interacting with climate scientists will help in empowering our generation”, said PARK Hayoung.

CHO Hyewon (GEYK) stated that civil society organizations in South Korea can learn a lot from their German counterparts in terms of communicating the urgency of the climate issue to the public and stakeholders. “I am looking forward to collaborating with German youth organizations and NPOs on climate governance. Humanity needs to accelerate its efforts to reach zero emissions and climate stability as soon as possible,” said Ms. Cho.

German Federal President Frank-Walter STEINMEIER further asked the panel about the effect of global warming and ice-sheet melting on the Atlantic Ocean circulation and the climate in adjacent Europe. Prof. Timmermann, an expert in Atlantic circulation dynamics, explained that most climate models today predict a substantial weakening of the circulation over the next 100 years if CO2 emissions are not reduced to zero soon. Even though a weaker circulation may partly moderate the effect of global warming over Europe, it can have further negative ripple effects, such as an accelerated sea-level rise along the US east coast, reduction of the oceanic uptake of CO2, or the collapse of coastal upwelling off the coast of Namibia, which nowadays hosts one of the most biologically productive regions in the world ocean.

The roundtable panel agreed on the urgent need for climate action and the fundamental importance of the upcoming COP27 meeting in Sharm El-Sheikh in Egypt. Members from both GEYK and ICCP will attend the COP27 meeting and participate in activities in the Korean pavilion there.

“I hope that our gathering today was just a launch pad for an annually recurring carbon-neutrality climate roundtable with youth representatives, scientists, and politicians from both countries,” said Axel TIMMERMANN, Director of the IBS Center for Climate Physics in Busan, and moderator of the discussion. “I believe that we can all learn from each other in terms of implementing our zero-emission targets.”

The one-hour-long conversation in the impressive Nakdong Estuary Eco Center (photo) sent a message of optimism that fruitful international cooperation between politicians, scientists, climate activists, and the industry can pave the way for a more sustainable, carbon-free future.