PHILADELPHIA – While gene mutations can lead to drug resistance, researchers in the Perelman School of Medicine at the University of Pennsylvania have identified an important, non-genetic adaptation that could also drive resistance to targeted therapy in T cell leukemia, a type of blood cell cancer. Their findings were published this month in Molecular Cell. 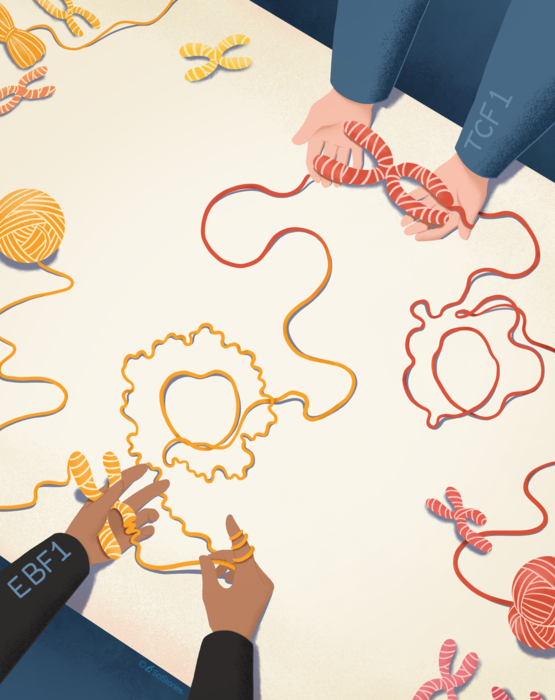 PHILADELPHIA – While gene mutations can lead to drug resistance, researchers in the Perelman School of Medicine at the University of Pennsylvania have identified an important, non-genetic adaptation that could also drive resistance to targeted therapy in T cell leukemia, a type of blood cell cancer. Their findings were published this month in Molecular Cell.

If you stretched the DNA fiber packed inside of a single cell, it would reach six feet long from end to end — that’s like fitting a ball of yarn twice the size of Manhattan into a tennis ball. The strand must be folded just right for the cell to properly function. Genome misfolding is linked to many diseases, including cancer.

“Genome folding controls where the genes are in the space of the cell and is important for proper control of gene activity,” said R. Babak Faryabi, PhD, an assistant professor of Pathology and Laboratory Medicine at Penn, who led the study with Yeqiao Zhou, a Genetics and Epigenetics graduate student. “We’ve discovered that T leukemic cells can change the folding of their genome to adapt to targeted therapy and evade its anti-cancer effects.”

One of the most common causes of developing resistance to cancer therapy is the acquisition of new genetic mutations, which enable cancer cells to bypass the effect of the treatment. Epigenetic adaptations, on the other hand, are chemical modifications and alternate packaging of the genome, which lead to the creation of different cell types in our body, despite originating from an identical genetic code. These adaptations are now emerging as equally important contributors to cancer therapy resistance.

Until now, it has been unclear whether and how cancer cells modify their genome folding — an epigenetic regulator of gene activity —  to develop resistance to cancer drugs.

Faryabi and collaborators used the latest technologies to biochemically and optically study T leukemic cells and their resistance to a class of drugs called Notch inhibitors. Notch is one of the most frequently mutated genes in T cell leukemia.

The researchers discovered widespread changes in the folding of the genome of cells that were resistant to Notch inhibitors, and they found that these genome refolding events were driven by the repositioning of EBF1, a transcription factor that is required for the generation of B cells at the expense of T cells. Moving EBF1 to another location within the cancerous T cell space leads to its activation. In turn, EBF1 alters the folding of other parts of the genome and ultimately activates B cell genes, conferring resistance to Notch inhibitors, in the absence of any genetic mutation.

The implications of the findings are threefold: Faryabi and his team now understand the underpinning mechanism of epigenetic adaptation in this cancer type in unprecedented detail. Clinicians, therefore, may now be able to use those findings to better identify which patients may become resistant to therapy. And testing for epigenetic changes should complement the existing genetic tests to fully implement a personalized treatment strategy for patients, Faryabi said.

“Sequencing the genome of these patients, in this case, would not be informative,” Faryabi said. “But now, we can use existing technology to look at the location of genes inside a patient’s cell, and we can potentially predict the cell’s behavior in response to the treatment.”

Penn Medicine is one of the world’s leading academic medical centers, dedicated to the related missions of medical education, biomedical research, and excellence in patient care. Penn Medicine consists of the Raymond and Ruth Perelman School of Medicine at the University of Pennsylvania (founded in 1765 as the nation’s first medical school) and the University of Pennsylvania Health System, which together form a $8.9 billion enterprise.

The Perelman School of Medicine has been ranked among the top medical schools in the United States for more than 20 years, according to U.S. News & World Report’s survey of research-oriented medical schools. The School is consistently among the nation’s top recipients of funding from the National Institutes of Health, with $496 million awarded in the 2020 fiscal year.

Penn Medicine is powered by a talented and dedicated workforce of more than 44,000 people. The organization also has alliances with top community health systems across both Southeastern Pennsylvania and Southern New Jersey, creating more options for patients no matter where they live.

Penn Medicine is committed to improving lives and health through a variety of community-based programs and activities. In fiscal year 2020, Penn Medicine provided more than $563 million to benefit our community.