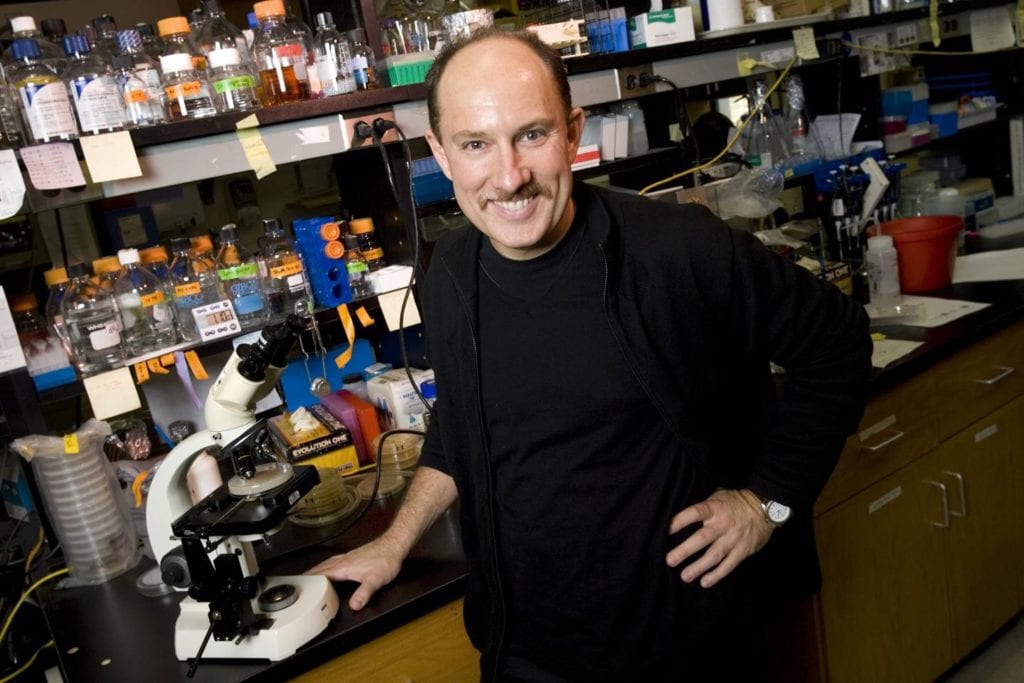 Joseph Heitman, MD, PhD of Duke University is the recipient of the 2019 Genetics Society of America (GSA) Edward Novitski Prize. Heitman is honored for his work on human fungal pathogens and for identifying the molecular targets of widely-used immunosuppressive drugs. The latter work proved to be a seminal contribution to the discovery of the TOR pathway, which regulates cell growth and activity in response to nutrients.

The Novitski Prize recognizes an extraordinary level of creativity and intellectual ingenuity in the solution of significant problems in genetics research. “Joe is an exceptionally imaginative geneticist, and his work has often been paradigm changing,” says William K. Holloman, a Professor at Cornell University Weill Medical College and one of the scientists who nominated Heitman for the Novitski Prize.

Heitman helped kickstart the study of the previously unknown TOR pathway with a series of inspired experiments during postdoctoral research at the Biozentrum of the University of Basel, under the mentorship of Michael N. Hall and in collaboration with Rao Movva from the pharmaceutical company Sandoz (now Novartis).

The story began with an unmet medical need. In the 1980s and 1990s, surgeons developing organ transplant procedures were finally starting to see success. Thanks to newly discovered immune-suppressing drugs isolated from soil microbes, the doctors were able to prevent transplanted organs from being rejected by the patient’s immune system.

Yet despite the success of these important drugs, it was not clear how they worked. Although they targeted specific cells of the immune system, the drugs had originally been identified as antifungal chemicals. Heitman and his colleagues reasoned that this ability to kill fungi could be the key to understanding how the drugs worked in humans.

The microbes likely evolved to produce these natural product drugs to fend off fungal competitors in the soil. Perhaps, the team hypothesized, the mechanism by which they inhibited fungal growth would be the same by which they inhibited function of the immune system. After all, despite the obvious differences between fungi and ourselves, we all evolved from a common ancestor and share many components of our basic cellular machinery. That is why Heitman proposed an unconventional strategy for identifying the molecular targets of the new drugs: studying their effects on baker’s yeast.

As one of the best understood fungi, with many genetic research tools already available, yeast supplied a powerful method for honing in on targets of the drugs. The group investigated the effects on yeast of several transplant drugs, including a then-experimental compound named rapamycin.

Rapamycin turned out to have a similar effect on yeast cells as it did on human immune cells–blocking progress of the cell cycle. This not only supported their hypothesis, it made it possible for them to screen for the chemical’s molecular targets by looking for the yeast genes that made the cells vulnerable to rapamycin treatment.

Their strategy paid off quickly. Heitman isolated rapamycin-resistant yeast mutants, and identified three genes needed to make the yeast sensitive to the drug. Among them were two previously uncharacterized genes that they named TOR1 and TOR2, for “Target of Rapamycin” and tor, the German word for gateway (in honor of Basel’s medieval city gate Spalentor). The third gene encodes FKBP12, the cellular receptor that binds rapamycin to form a complex that inhibits TOR.

Spurred by the discovery of the fungal targets of rapamycin, other research groups later confirmed that the human version of these yeast genes, mTOR, was also the target of the drug’s immunosuppressive activity.

“Joe exploited yeast genetics in a creative, clever, and unique way, which ultimately led to the appreciation that immunosuppressive drugs work through a pathway that is conserved from yeast to humans. His work was instrumental in understanding this important network,” says colleague Sue Jinks-Robertson, a Professor at Duke University who nominated Heitman for the Novitski Prize.

Thanks to the subsequent work of many researchers, including Heitman, Tor proteins are now understood to be at the center of a critical pathway for both biology and medicine. Animals, plants, and fungi all use Tor proteins to sense nutrient levels and set in motion appropriate physiological responses. Without Tor, cell growth and division become uncoupled from nutrient status, which is why dysfunction of the pathway is implicated in many human disorders, including cancer, cardiovascular disease, and diabetes, as well as the aging process.

As Heitman established his own research group, linking fundamental insights in fungal biology to medically important problems became a recurring theme in his work. He has made many contributions to our understanding of fungal species that cause diseases, including findings on how such fungi sense their environment, what factors affect their virulence, and how antifungal drugs work. His studies have defined fungal mating type loci, including their evolution and links to virulence, and illustrated convergent transitions from outcrossing to inbreeding in fungal pathogens of plants and animals. He has led efforts to establish new genetic and genomic methods for studying pathogenesis in Cryptococcus species, which cause a range of life-threatening infections–and up to 15% of all AIDS-related deaths–but are of a quite different type than most other fungal pathogens of humans.

Studying Cryptococcus has also produced broader insights into how many other fungal diseases evolve and cause outbreaks. For example, Heitman’s work on Cryptococcus has contributed to a growing consensus that, contrary to previous assumptions, fungal pathogens have a robust sex life. His group even discovered an entirely new mode of fungal reproduction.

Like many fungi, Cryptococcus occurs as two different mating types. In the lab, one cell of each type can pair up to mate and sexually reproduce. But one of these two mating types is extremely rare in the wild, so Cryptococcus was thought to mostly go without sex–if it ever occurred at all. The vast majority of cells were thought to reproduce by splitting into genetic clones.

However, Heitman and colleagues found that Cryptococcus cells can mate with themselves by fusing with others of the same mating type or undergoing endoreplication to produce new offspring. This “unisexual reproduction” involves many of the same intricate series of steps as sexual reproduction, including the transition from haploid to diploid and the dividing up of chromosomes by meiosis to ensure offspring receive the correct final number. The main difference? Unisexual reproduction can occur between two genetically identical cells or genomes, such as “mother” and “daughter” cells that have just split by normal cell division.

But why go to all this trouble? Why not just keep multiplying by asexual division? The main evolutionary benefit of sex is to shuffle genetic variants in a population into new combinations. In unisexual reproduction, mixing around the genomes of two parents with already matching variants would make no difference–the offspring would have the same combinations as their parents.

Heitman and others are now studying the roles of sexual reproduction in the evolutionary dynamics of fungal pathogens to better understand how they spread, switch hosts, become more virulent, and a host of other important clinical questions, such as how the emerging pathogen Cryptococcus gattii expanded its geographic range to cause an ongoing outbreak in North America.

The Novitski Prize recognizes a single experimental accomplishment or a body of work in which an exceptional level of creativity and intellectual ingenuity has been used to design and execute scientific experiments to solve a difficult problem in genetics. It recognizes the beautiful and ingenious experimental design and execution involved in genetics research. The Prize, established by the Novitski family and GSA, honors the memory of Edward Novitski (1918-2006), a Drosophila geneticist and lifelong GSA member who specialized in chromosome mechanics and meiosis through the construction of modified chromosomes.

Targeting epilepsy with electrodes on the head

Deep biomarkers of aging and longevity: From research to applications