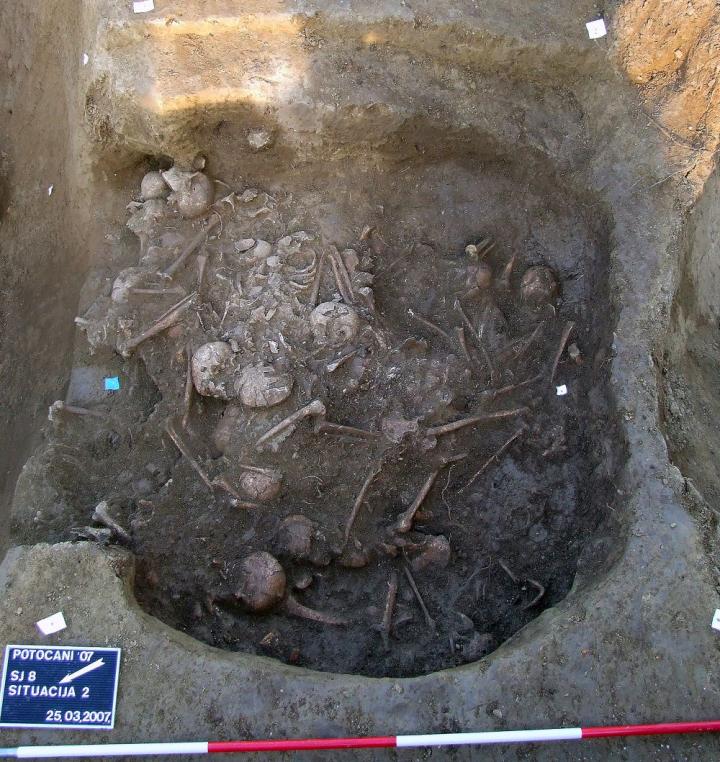 Genetic analysis provides clarity and also prompts further questions around an ancient massacre in Potočani, Croatia, in a study published March 10, 2021 in the open-access journal PLOS ONE by Mario Novak from the Institute for Anthropological Research, Croatia, Ron Pinhasi from the University of Vienna, Austria, David Reich from Harvard Medical School and Harvard University, USA, and colleagues.

To date anthropological and genomic analysis of early massacres has revealed cases where the victims were plausibly killed due to battle, in-versus-out-group conflicts (such as targeting of specific families or recent migrants), or religious ritual. The massacre of 41 individuals in Potočani, Croatia, 6,200 years ago described in this study, one of the largest-scale genetic analysis of an ancient massacre to date, marks an instance of indiscriminate killing at a large scale.

The authors were able to retrieve genomic data from the bones of 38 of the 41 individuals found buried in a mass grave at Potočani, Croatia, radiocarbon dated to 4,200 years cal BCE and belonging to the Lasinja culture of the Middle Eneolithic (Copper Age).

A combination of genetic and morphological analysis revealed the grave held individuals from both sexes (21 males and 20 females) and spanning age groups: over half of the sample (21) consisted of subadults (two younger children aged between two and five years, nine older children aged between six and 10 years, and 10 adolescents aged between 11 and 17 years. Of the remaining 20 adults, 14 individuals were aged between 18 and 35 years and five between 36 and 50 years, and one adult’s age at death could not be determined accurately. The genetic analysis also revealed that while some individuals in the grave were linked by family ties (eg a younger man, his two young daughters, and his nephew (brother’s son) were all found in the pit), the majority of individuals (70 percent) were unrelated and instead appear to be a sample of what was clearly a large pastoral population. Interestingly, though not linked in most cases by close kin-ties, genetic evidence shows the individuals found in this grave all shared homogenous ancestry (predominantly Anatolian Neolithic with ~9% Western European hunter-gatherer ancestry), indicating the local population was large and stable–and making it unlikely that the massacre was linked to the arrival of a new, genetically-unrelated group. Though there’s no way to know for sure with the evidence currently available, the authors suggest a possible reason for the massacre as potentially due to a combination of adverse climactic conditions and/or a significant increase in population size.

The results show that large-scale indiscriminate killing isn’t just restricted to modern and historic periods but was also a significant process in pre-state societies. The authors note further genetic analysis of ancient massacre sites will be necessary to determine just how frequently this type of violence occurred in the past.

The authors add: “A prehistoric massacre 6000 years ago in present-day Croatia: Ancient DNA reveals new insights about the 41 victims.”

Funding: M.N., I.J. and J.B. were supported by the Croatian Science Fund grant HRZZ IP-2016-06-1450. I.O. was supported by a fellowship from “la Caixa” Foundation (ID 100010434), code LCF/BQ/PI19/11690004. D.R. was supported by the National Institutes of Health (NIGMS GM100233), the John Templeton Foundation (grant 61220), and the Paul Allen Foundation (Allen Discovery Center grant), and is an Investigator of the Howard Hughes Medical Institute. The ancient DNA work was funded by NIH (NIGMS) grant GM100233, the Paul Allen Foundation, the John Templeton Foundation grant 61220 and the Howard Hughes Medical Institute. The funders had no role in study design, data collection and analysis, decision to publish, or preparation of the manuscript.

Competing Interests: I have read the journal’s policy and the authors of this manuscript have the following competing interests: Mario Novak and Ron Pinhasi serve as Academic Editors for PLOS ONE.

In your coverage please use this URL to provide access to the freely available article in PLOS ONE: https://journals.plos.org/plosone/article?id=10.1371/journal.pone.0247332