Researchers have successfully used CRISPR-Cas9 to edit the genomes of the black-legged tick. To accomplish this feat, they developed an embryo injection protocol that overcame a major barrier in the field. The work appears February 15 in the journal iScience. 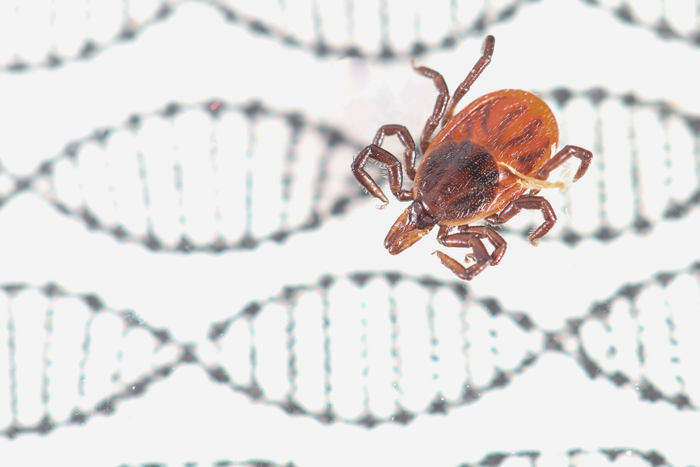 Researchers have successfully used CRISPR-Cas9 to edit the genomes of the black-legged tick. To accomplish this feat, they developed an embryo injection protocol that overcame a major barrier in the field. The work appears February 15 in the journal iScience.

“Despite their capacity to acquire and pass on an array of debilitating pathogens, research on ticks has lagged behind other arthropod vectors, such as mosquitoes, largely because of challenges in applying available genetic and molecular tools,” says Monika Gulia-Nuss (@gulianusslab) a co-senior author of the study and a molecular biologist at the University of Nevada, Reno.

“Having genome-editing tools available will allow us to unlock some of the secrets of the tick genome and allow us to determine how these unique animals survive in the environment, how they interact with pathogens, and how we might prevent ticks from spreading diseases to humans and livestock,” she says.

Despite the public health relevance of ticks—which are vectors of a wide variety of pathogens to humans, wildlife, and domestic animals—knowledge of the biology of ticks on a molecular level is still limited. This is in contrast to insects such as mosquitoes, for which numerous tools for transgenic development and genome editing are now available. “Progress in this area is critical for the advancement of research to solve the growing problem of tick-borne diseases,” says Andrew Nuss, the other co-senior author of the study and an entomologist at the University of Nevada, Reno.

CRISPR-Cas9 has revolutionized functional genetics research in many organisms. This gene-editing technique has been applied to mosquitoes and other arthropod disease vectors, but successful gene editing has not yet been reported in ticks. Technical challenges for injecting tick embryos to attempt gene editing have further slowed research progress. Tick embryos are extremely difficult to inject because of high pressure inside the eggs, a hard chorion (the outer shell of the egg), and a wax layer outside the embryo that must be removed before injection. Female ticks use a specialized organ called Gene’s organ to coat their eggs with a tough wax layer.

In the iScience study, the researchers developed a successful tick-embryo injection protocol and targeted gene disruption with CRISPR-Cas9 using two methods: embryo injection and Receptor-Mediated Ovary Transduction of Cargo (ReMOT Control)—a less-labor-intensive method of gene editing in arthropods. The researchers ablated Gené’s organ to prevent wax deposition and then treated the eggs with chemicals called benzalkonium chloride and sodium chloride to remove the chorion and to decrease the pressure inside the eggs.

“We were able to carefully dissect gravid female ticks to surgically remove the organ responsible for coating the eggs with wax, but still allowing the females to lay viable eggs. These wax-free eggs permitted injection of tick embryos with materials necessary for genome modification,” Gulia-Nuss says. “Another major challenge was understanding the timing of tick embryo development. So little is known about tick embryology that we needed to determine the precise time when to introduce CRISPR-Cas9 to ensure the greatest chance of inducing genetic changes.”

The survival rate of injected embryos was approximately 10%, comparable to well-established insect models. For ReMOT Control, all injected ticks survived. The data show the feasibility of tick embryo injection and genetic manipulation in ticks by both methods, which had comparable editing efficiency for the Proboscipedia (ProbP) gene, which is expressed in appendages.

“Previously, no lab has demonstrated genome modification is possible in ticks. Some considered this too technically difficult to accomplish,” Nuss says. “This is the first study to demonstrate that genetic transformation in ticks is possible by not only one, but two different methods.”

More research is needed to fully understand the molecular mechanisms underlying efficient gene editing in ticks. While these tools will accelerate tick genetic research, improvements are needed in the embryo injection protocol to enhance survival and larval hatching and gene-editing efficiencies.

“We expect that the tools we developed here will open new research avenues that will dramatically accelerate our understanding of the molecular biology of this and related tick species,” Gulia-Nuss says. “Targeted disruption of genes in tick vectors of human pathogens is a powerful method to uncover the underlying biology of tick-pathogen-host interactions that can inform the development and application of new approaches to tick-borne disease control.”

In addition to University of Nevada, Reno researchers, the project involved researchers with Pennsylvania State University’s Center for Infectious Disease Dynamics and University of Maryland’s Institute for Bioscience and Biotechnology Research.

Several co-authors have filed for patent protection on the ReMOT Control technology.