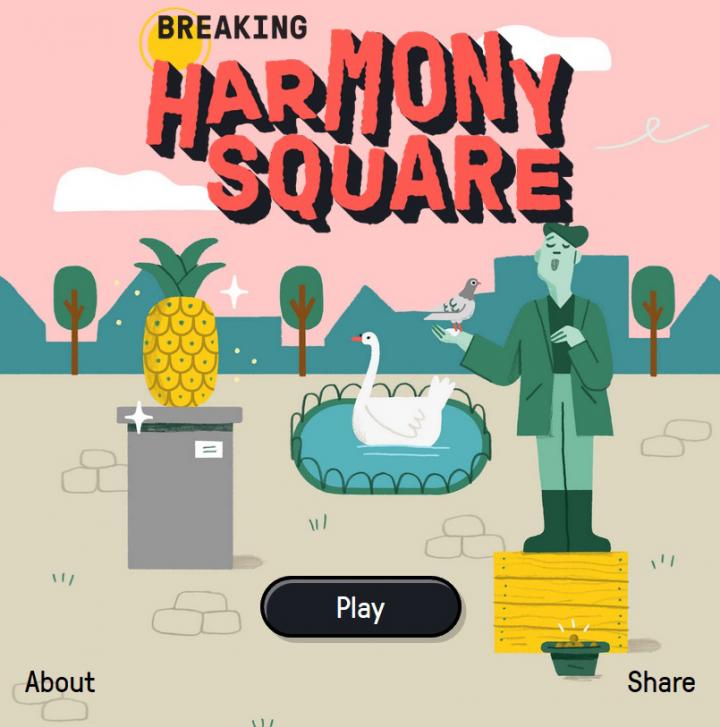 A short online game in which players are recruited as a “Chief Disinformation Officer”, using tactics such as trolling to sabotage elections in a peaceful town, has been shown to reduce susceptibility to political misinformation in its users.

The free-to-play Harmony Square is released to the public today, along with a study on its effectiveness published in the Harvard Misinformation Review.

It has been created by University of Cambridge psychologists with support from the US Department of State’s Global Engagement Center and Department of Homeland Security Cybersecurity and Infrastructure Security Agency (CISA).

The gameplay is based on “inoculation theory”: that exposing people to a weak “dose” of common techniques used to spread fake news allows them to better identify and disregard misinformation when they encounter it in future.

In this case, by understanding how to incite political division in the game using everything from bots and conspiracies to fake experts, players get a form of “psychological vaccine” against the product of these techniques in the real world.

“Trying to debunk misinformation after it has spread is like shutting the barn door after the horse has bolted. By pre-bunking, we aim to stop the spread of fake news in the first place,” said Dr Sander van der Linden, Director of the Cambridge Social Decision-Making lab and senior author of the new study.

Twitter has started using a “pre-bunk” approach: highlighting types of fake news likely to be encountered in feeds during the US election. However, researchers argue that familiarising people with techniques behind misinformation builds a “general inoculation”, reducing the need to rebut each individual conspiracy.

In the 10-minute game Harmony Square, a small town neighbourhood “obsessed with democracy” comes under fire as players bait the square’s “living statute”, spread falsehoods about its candidate for “bear controller”, and set up a disreputable online news site to attack the local TV anchor.

“The game itself is quick, easy and tongue-in-cheek, but the experiential learning that underpins it means that people are more likely to spot misinformation, and less likely to share it, next time they log on to Facebook or YouTube,” said Dr Jon Roozenbeek, a Cambridge psychologist and lead author of the study.

In a randomized controlled trial, researchers took 681 people and asked them to rate the reliability of a series of news and social media posts: some real, some misinformation, and even some faked misinformation created for the study, in case participants had already come across real-world examples.

They gave roughly half the sample Harmony Square to play, while the other half played Tetris, and then asked them to rate another series of news posts.

The perceived reliability of misinformation dropped an average of 16% in those who completed Harmony Square compared to their assessment prior to playing. The game also reduced willingness to share fake news with others by 11%. Importantly, the players’ own politics – whether they leaned left or right – made no difference.

Having the “control group” who played Tetris allowed the scientists to determine an “effect size” of 0.54 for the study, said Van der Linden.

“The effect size suggests that if the population was split equally like the study sample, 63% of the half that played the game would go on to find misinformation significantly less reliable, compared to just 37% of the half left to navigate online information without the inoculation of Harmony Square,” he said.

The project follows other playful attempts by CISA to illustrate how “foreign influencers” use disinformation to target “hot button” issues. A previous demonstration took the example of whether pineapple belongs on pizza.

However, Harmony Square is based on the findings of a number of studies from the Cambridge team showing how similar gamified approaches to digital literacy significantly reduce susceptibility to fake news and online conspiracies.

The team behind the game, which includes the Dutch media agency DROG and designers Gusmanson, have recently worked with the UK Cabinet Office on Go Viral!, an intervention that specifically tackles conspiracies around COVID-19.

Harmony Square is geared towards the politically charged misinformation that has plagued many democracies over the last decade. “The aftermath of this week’s election day is likely to see an explosion of dangerous online falsehoods as tensions reach fever pitch,” said Van der Linden.

“Fake news and online conspiracies will continue to chip away at the democratic process until we take seriously the need to improve digital media literacy across populations. The effectiveness of interventions such as Harmony Square are a promising start,” he said.