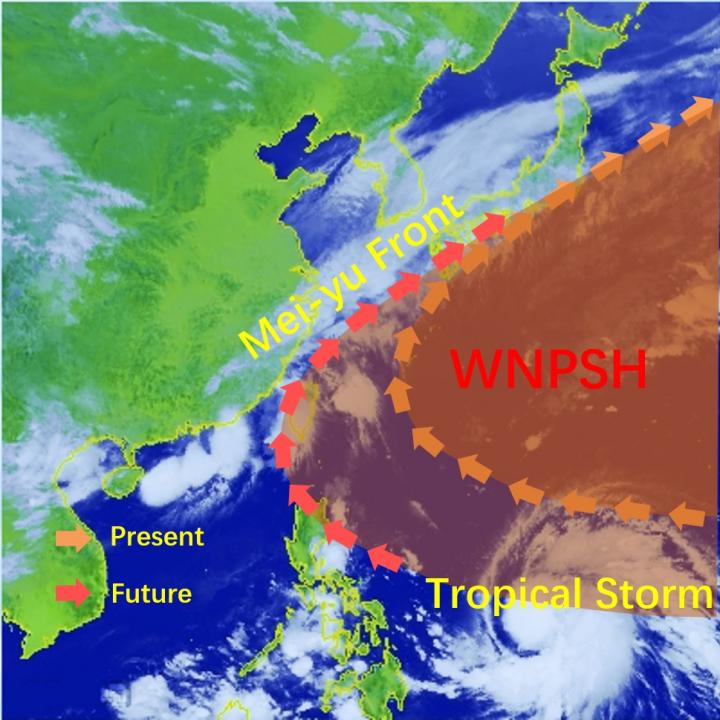 The western North Pacific Subtropical High (WNPSH) is a key atmospheric circulation system strongly influences weather and climate over the entire East and Southeast Asia. It determines the strength and position of the Mei-yu (or Baiu/Changma) Front and the trajectories of typhoon and western Pacific tropical cyclones. How it will change in the future concerns the livelihood of many millions of people. The answer from state-of-the-art climate models is currently ambiguous. A total of 35 models participating in the Fifth Phase of Coupled Model Intercomparison Project (CMIP5) cannot agree on the sign of future changes.

A new research published in Nature Communications this week led by the Institute of Atmospheric Physics/Chinese Academy of Sciences (IAP/CAS), in collaboration with the Met Office Hadley Centre in the UK and Nanjing University, has found that such uncertainties are mainly resulted from systematic biases in simulating the historical sea surface temperature from individual models. With correction by observed sea surface temperature, under the Representative Concentration Pathway (RCP) 8.5, a high greenhouse gas emission scenario, the models will tend to agree on a future intensification of the WNPSH with 45% of the uncertainty reduced, which implies stronger East Asian summer monsoon with increased rainfall but reduced typhoon landfalls over East Asia. In the meantime, it could also imply increased risk of heatwaves in the southern and eastern China.

“Uncertainties with climate models are there to stay, even though models have progressively improved. How to get the best information for climate adaptation and decision makers from currently available model projections is an important research topic.” Said the lead author, Dr. Xiaolong Chen from the Institute of Atmospheric Physics in Beijing.

This work was jointly funded by an international programme from the Chinese Academy of Science and the Newton Fund from the UK under CSSP-China. Dr Peili Wu, a co-author from the Met Office Hadley Centre, said: “Given the importance of the WNPSH, this is an important step towards the right direction. As the observed climate was only one realization of many possibilities, some uncertainties will remain.” So as Dr. Tianjun Zhou, executive director of the institute and a co-author, pointed out, “The link with future changes of the East Asia summer monsoon and western Pacific tropical cyclones needs further investigation.”