Future forests will have smaller trees and soak up less carbon, study suggests

There is no crystal ball to tell ecologists how forests of the future will respond to the changing climate, but a University of Arizona-led team of researchers may have created the next best thing. 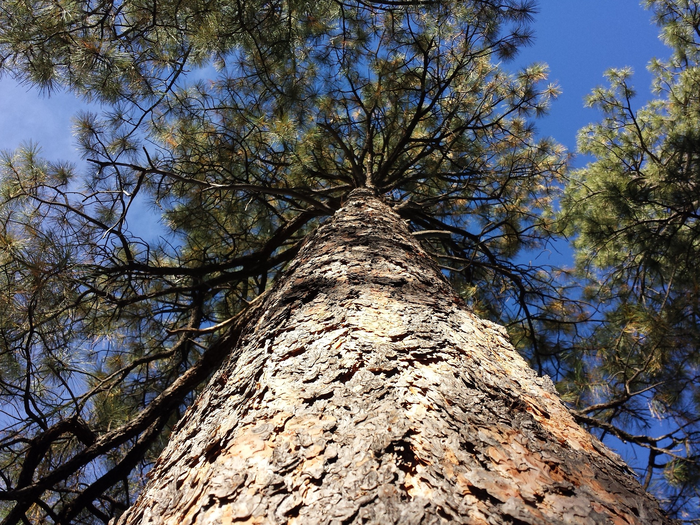 There is no crystal ball to tell ecologists how forests of the future will respond to the changing climate, but a University of Arizona-led team of researchers may have created the next best thing.

By combining tree-ring data with U.S. Forest Service inventory data on Arizona’s ponderosa pines, the team captured a more complete picture than traditional models have provided of what drives future tree growth. The researchers predict a 56 to 91% decline in individual tree growth, according to a new study published in Global Change Biology.

“The growth declines we’re forecasting will mean less uptake of atmospheric carbon dioxide in the future by Arizona’s forests,” said lead study author Kelly Heilman, a postdoctoral research associate in the UArizona Laboratory of Tree-Ring Research. “While Arizona’s forests are relatively small in terms of their contribution to the total U.S. carbon sequestration, our approach can be used to make the same predictions for forests around the world.”

Forests remove carbon dioxide from the atmosphere, which offsets some greenhouse gas emissions globally and helps to mitigate climate change.

“It’s a free service that forests provide, so forests have been touted as one of the many natural climate solutions that countries rely on to offset their emissions,” Heilman said. “But competition between trees, droughts and disturbances can reduce forest carbon uptake. Knowing how much carbon forests take up globally is essential to addressing the climate crisis and planning for a resilient future.”

Many countries, including the U.S., maintain national forest inventory programs in which foresters take a census of trees in 1/6-acre plots to track forest status and change. These censuses are taken as frequently as every five years, but in the western U.S. they’re done every 10 years. Among the data collected is the number of trees, their diameters and soil quality.

Dendrochronologists can use tree rings almost like a thermometer or rain gauge to study climate variability.

“The annual resolution data you get from tree rings strongly complements the forest inventory measurements when you combine them in the statistically robust way that we have here,” Evans said. “We’re using tree rings in a new way to think about how the whole forest ecosystem is behaving and how carbon sequestration is influenced by climate variability.”

When the researchers combined tree-ring data with the census data, they were able to infer the size of the trees each year and see how the trees responded to climate variables such as year-to-year variation in rainfall and temperature, as well as ecological characteristics such as competition with other trees, soil quality and tree diameter.

“Past studies have focused just on climate and excluded other patterns in the data because so much of the science of dendrochronology is focused on climate, specifically reconstructing past climate,” Evans said. “We’re using the tree-ring data in a much more ecological way and thinking about all the things affecting the tree at the same time.”

The reasons for declining tree size are varied and complex, but the main culprit is the fact that ponderosa pines in Arizona grow less as temperature increases. This is especially true for the largest trees.

“A tree has to work against gravity to get water to its top, and the tallest trees have to work the hardest. If you turn up the temperature, the water-transport system of the tree is under even greater pressure and often is damaged,” Evans said. “Warming means trees are more drought stressed, and growth is reduced.”

“The third interaction is between forest density and the climate variables. These interactions show that denser forests fare worse when it’s hotter and drier, which is generally what we’d expect for the species, but this is concerning given the recent densification of these forests,” Heilman said.

The study has implications for forester managers, who could have an opportunity to mitigate climate-induced stress on trees, Evans said.

“Foresters can’t influence the climate, but they can change forest density to reduce competition for the remaining trees,” Evans said. “If you have both an overly dense forest and climate warming happening at the same time, that’s a double whammy. But if you thin the forests, you can remove one source of stress.”

To improve their tree growth prediction even more, the researchers hope in future work to consider variables such as past wildfires or insect disturbances, Heilman said.

“We analyzed different sources of uncertainty about future tree growth,” Evans said. “Knowing where the uncertainty comes from is the grist for scientific improvement.”