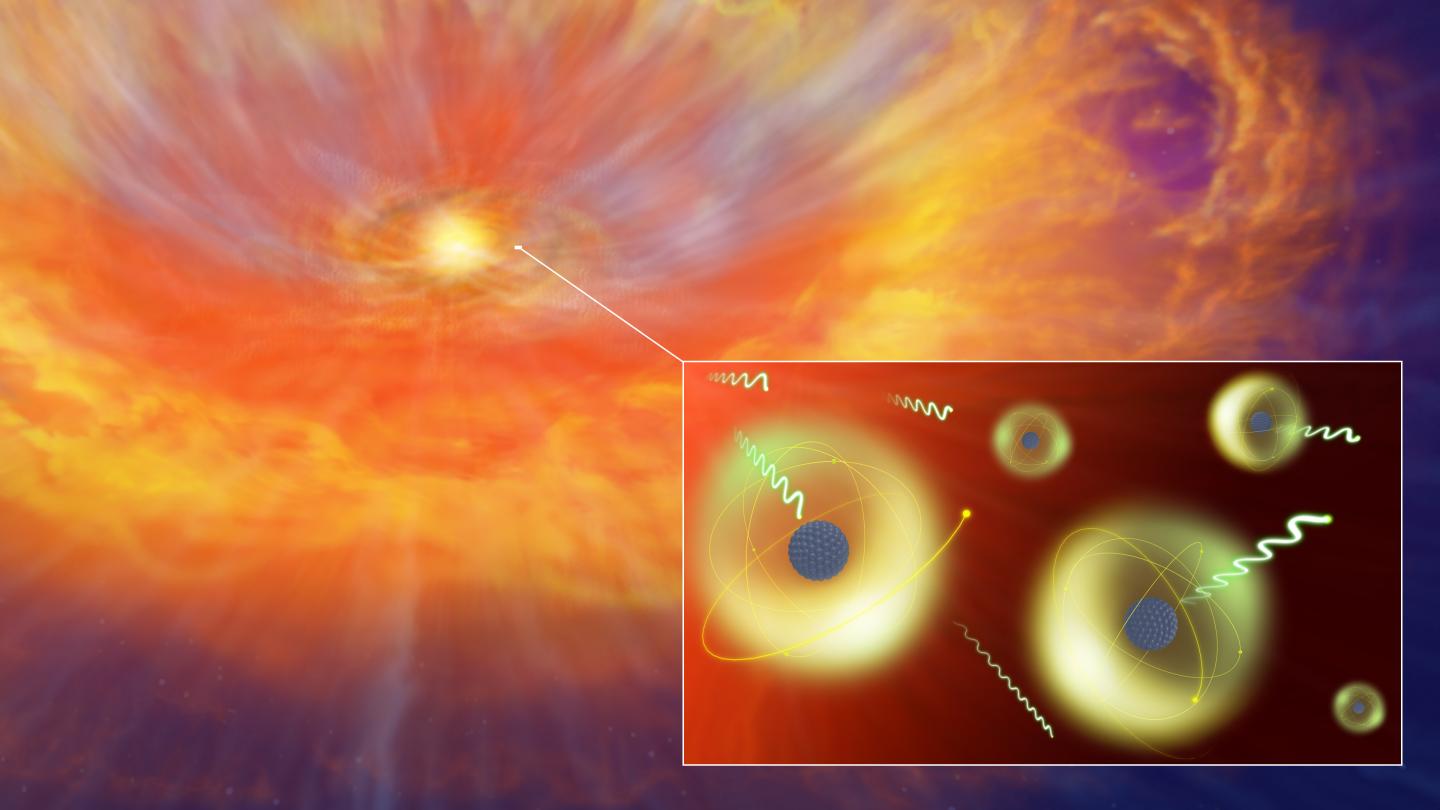 A research team of experts in atomic physics, nuclear fusion science, and astronomy succeeded in computing millions of highly accurate atomic data of neodymium ions in the Japan-Lithuania international collaboration. This research accelerates studies of a long-standing mystery regarding the origin of precious metals such as gold and platinum in our universe.

It is not yet identified where and how elements heavier than iron in the universe have been made. Drawing attention as one of the origins of the heavy elements is a merger of two neutron stars. In August 2017, gravitational waves caused by the merger of two neutron stars 130 million years ago were detected. At the same time, emission of the light called kilonova was also observed. The light of a kilonova comes from the material released by the merger of the neutron stars, and it is believed that the material contains abundant heavy elements, including precious metals such as gold and platinum, and rare earth metals such as neodymium.

Elements have the property of absorbing light. The wavelength of the light absorbed by the element and the degree of its absorption are unique to each element and they are called atomic data. By using this atomic data, we can estimate the species and the abundance of heavy elements produced in the merger of neutron stars by analyzing the brightness and the wavelength distributions of the light of a kilonova. However, the available atomic data of heavy elements are extremely limited in widely used world standard databases of the National Institute of Standards and Technology (NIST). Therefore, collaborative research in the fields of atomic physics, astronomy and fusion science is conducted to provide highly accurate atomic data for the light of a kilonova. In nuclear fusion research, atomic data is necessary to analyze the amount and transport of impurities such as iron ions in high temperature plasmas. Daiji Kato, an Associate Professor at the National Institute for Fusion Science (NIFS) in Japan, is collaborating with Gediminas Gaigalas, Professor at Vilnius University in Lithuania, and colleagues in his group to advance research for constructing highly accurate atomic data by computation. Methods of computation that have been used for nuclear fusion research can be applied for atomic data to analyze the light of a kilonova.

The research team focused on singly-, doubly-, and triply-ionized neodymium ions which have the largest influence on the light of kilonovae. Neodymium ions can form more arrangements of constituent electrons than those of lighter elements such as iron, and provide a tremendous number of wavelengths for light absorption.

High precision computation of multiple-electron atoms is challenging due to difficulties in accounting for subtle correlations among electrons. In quantum mechanics, the correlation effects are represented by coherent superposition of different arrangements of constituent electrons. A virtually infinite number of arrangements are possible. The research team tested different sets of arrangements as to provide high accuracy data in realistic computation times, and succeeded in finding the optimal set of arrangements for each neodymium ion. Computed energies of constituent electrons agree with NIST’s world standard data within approximately 10% error in average, which is a much higher accuracy than has ever been achieved by the research team, and provide millions of wavelengths and probabilities for light absorption. An astronomer in the team, Masaomi Tanaka, Associate Professor at Tohoku University simulated the light of kilonovae using both the data with the highest precision and the data with a poor accuracy. The influence of the difference in precision on the brightness of the light is evaluated quantitatively for the first time to be approximately 20% at most. This value is sufficiently small to increase confidence in analysis of the light of kilonovae. Thus, the results of this research will accelerate research to elucidate the origins of precious metals such as gold and platinum in our universe by using the atomic data of highest precision.

These research results were published as Gaigalas et al. “Extended Calculations of Energy Level and Transition Rates of Nd II-IV Ions for Application to Neutron Star Mergers” in the Astrophysical Journal Supplement Series in February 2019.

How skin cells embark on a swift yet elaborate death