The action mechanism of the fungus Moniliophthora perniciosa, which causes witch’s broom disease in cocoa trees, with major losses for Brazilian producers, is being increasingly elucidated. In an article published in the Journal of Experimental Botany, researchers at the University of São Paulo’s Center for Nuclear Energy in Agriculture (CENA-USP) in Brazil report that the pathogen makes trees grow excessively, draining their energy, and that when they die, it colonizes dead cells and feeds on the accumulated lignin. 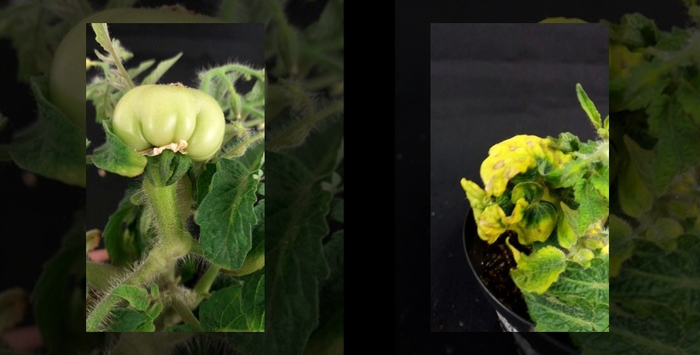 The action mechanism of the fungus Moniliophthora perniciosa, which causes witch’s broom disease in cocoa trees, with major losses for Brazilian producers, is being increasingly elucidated. In an article published in the Journal of Experimental Botany, researchers at the University of São Paulo’s Center for Nuclear Energy in Agriculture (CENA-USP) in Brazil report that the pathogen makes trees grow excessively, draining their energy, and that when they die, it colonizes dead cells and feeds on the accumulated lignin.

Previous research by the same group showed that the fungus synthesizes cytokinin, which alters the plant’s hormone balance and leads to excessive growth of infected tissue, competing with fruit production and root growth, and exhausting the plant via a mechanism similar to cancer (more at: agencia.fapesp.br/36824).

Now the group has discovered that infection occurs in two stages. The fungus first releases cytokinin and makes the tree produce lignin, its favorite food. In the second, the fungus consumes the lignin.

“There are two kinds of plant pathogen: biotrophic, feeding on living tissue, and necrotrophic, feeding on dead tissue. There’s also a hybrid class called hemibiotrophic, which initially infects living cells and then parasitizes dead cells at a later stage. M. perniciosa belongs to this hybrid class,” said agricultural engineer Antônio Figueira, a professor at CENA-USP and principal investigator for the research project.

According to Figueira, the fungus’s biotrophic phase is much longer than normal, lasting 30-45 days. During this phase, spores germinate and give rise to a specific, thicker and more irregular mycelium, which grows between the host cells without entering them.

“There’s little tissue colonization, so it’s hard to observe fungal hyphae in infected plants under a microscope,” he said. “On the other hand, the host’s tissue displays spectacular symptoms of disease, with overbudding and thickened branches. In other words, the fungus causes significant symptoms even though its density in tissue is low.”

The latest study by the researchers demonstrated that this hypergrowth drains the host plant’s energy, reducing the number and weight of its fruit as well as its root biomass. All this happens without an increase in fungal mycelium production.

“Tissue death occurs in the next phase of the disease when mycelium enters the cells and grows significantly. This mycelium is morphologically distinct, thin and linear, and colonizes all the dead tissue. After a time, mushroom production begins,” Figueira said.

Researchers had long wondered why the fungus appears not to benefit from colonizing the plant and causing so many symptoms. The new study provides answers.

“We discovered that during the initial phase, the plant hormone cytokinin released by the fungus makes the infected plant produce a great deal of vascular tissue so that secondary cell walls accumulate lignin, on which the fungus feeds after the plant’s tissue is dead,” he explained.

The species closest to M. perniciosa are all saprotrophic, meaning they feed on dead tissue and other organic detritus. The fungus that causes witch’s broom has apparently evolved to be capable of infecting living tissue, modifying its metabolism to promote the synthesis of lignin, its favorite food, and establishing a foothold in the plant before tissue death occurs. “This gives M. perniciosa a clear advantage over competing fungi,” Figueira said.

Witch’s broom disease was first described in 1919, but it was apparently confined to Amazonia in the North region of Brazil until the late 1980s when it spread to southern Bahia in the Northeast region. Brazil was then the second-largest cocoa grower, producing more than 400,000 metric tons per year. As a result of the disease, annual harvests had fallen to some 100,000 tons by 2000.

The industry is slowly recovering, but Bahia is no longer Brazil’s foremost cocoa-growing state, having fallen behind Pará. In 2020 the national crop was still only 250,000 tons, ranking seventh in the world. The latest scientific research is highly promising for the development of novel crop management techniques.