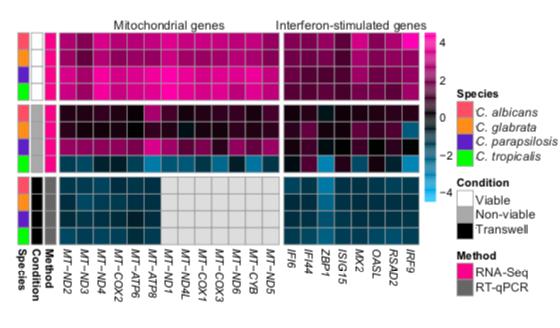 Candidiasis is a fungal infection caused by a yeast called Candida. It is a serious global health problem and it can be vaginal, oral or systemic. The latter is the most severe form of infection, as it can lead to death, but vaginal candidiasis infection is the most prevalent, affecting 80% of women at some point in their lives.

Scientists led by Dr. Toni Gabaldón, ICREA researcher and group leader at the Institute for Research in Biomedicine (IRB Barcelona) and the Barcelona Supercomputing Center (BSC), in collaboration with Dr. Bernhard Hube’s group at the Hans Knoell Institute and the University of Jena in Germany, have described the various mechanisms used by the fungus Candida to infect the epithelium of the vagina and how human cells respond.

Candidiasis is caused by several species of fungus and the study has focused on the four species that cause 90% of cases: Candida albicans, C. glabrata, C. parapsylasis, and C. tropicalis. The researchers have observed that each species has a distinct infection pattern. However, vaginal epithelial cells respond in the same way to different species and the response is modulated according to the severity of the infection as it progresses.

“Understanding the infection processes and the interaction of the fungus with epithelial cells could contribute to the search for a treatment that anticipates the defence response, making it more effective,” explains Dr. Gabaldón, head of the Comparative Genomics laboratory at IRB Barcelona and BSC.

A computational study of genetic patterns of infection and defence

Dr. Gabaldón’s group has focused on the computational analysis of gene expression patterns of the different Candida species during infection. In this regard, they have quantified, analysed, and compared the genes that are activated and those that remain silent in both human and fungal cells, when infection by the different species of Candida begins.

“Knowing the genetic pattern that corresponds to the pathological process would allow work on a kit to detect infection,” explains Hrant Hovhannisyan, co-first author of the study and PhD student of the Comparative Genomics laboratory.

Cell defence based on mitochondrial DNA

Analysis of the genetic defence response of human vaginal epithelial cells revealed that that it was based mainly on the action of mitochondria, the energy organelle of the cell. The researchers found that the mitochondria and even the cells release their DNA, thereby sending a signal to the immune system cells responsible for neutralising the infection.

“This system had previously been observed as a defence against viral infections and also some bacteria, but it is the first time it has been detected in response to a fungal infection,” explains Dr. Gabaldón.

This work was carried out within the framework of an Innovative Training Networks (ITN) project funded within the Marie Sk?odowska-Curie Actions call of the European Commission involving ten research groups from several European countries. “The excellence of the partners and the good environment for collaboration fostered by this type of project have allowed us to develop research with high added-value,” says Dr. Gabaldón, who is also the project coordinator.