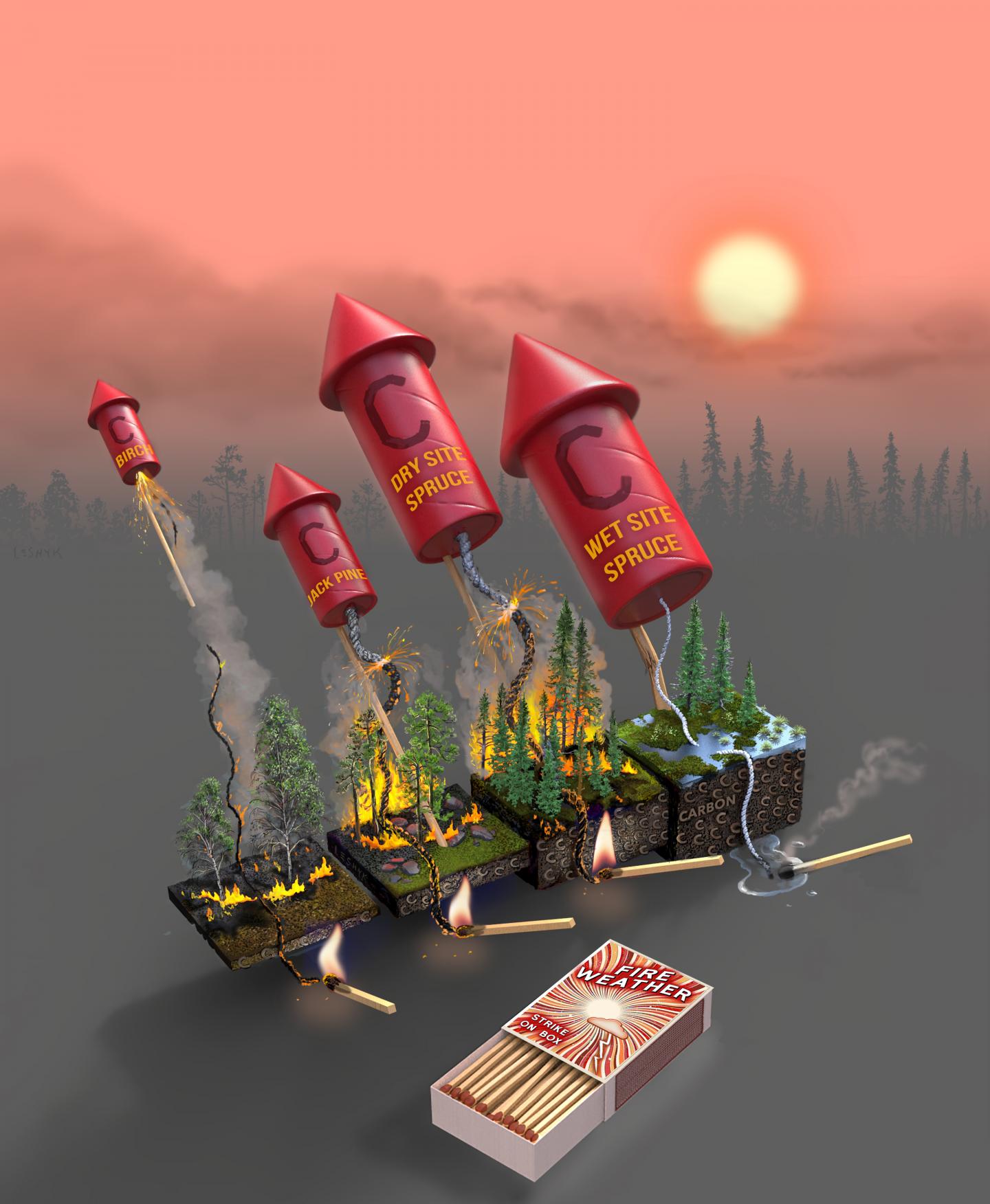 As climate warming stokes longer fire seasons and more severe fires in the North American boreal forest, being able to calculate how much carbon each fire burns grows more urgent. New research led by Northern Arizona University and published this week in Nature Climate Change suggests that how much carbon burns depends more on available fuels than on fire weather such as drought conditions, temperature, or rain. In a large retrospective study that stretched across Canada and Alaska, the international team of researchers found that the carbon stored belowground in soil organic matter was the most important predictor of how much carbon a fire will release.

The team surveyed the vast Western Boreal’s diverse forest conditions by analyzing field data collected from 417 burn sites in six ecoregions in Canada and Alaska between 2004-2015. They found that the amount of carbon stored in soils was the biggest predictor of how much carbon would combust, and that soil moisture was also significant in predicting carbon release.

“In these northern forests, soil, not trees, can account for up to 90 percent of carbon emissions, so we expected that these organic soils would be a significant driver,” said lead author Xanthe Walker of the Center for Ecosystem Science and Society at Northern Arizona University. “But we were surprised that fire weather and the time of year a fire starts proved to be poor indicators of carbon combustion. It’s really about the fuels that are there when a fire starts.”

That’s a pivotal finding, since fire weather, as measured by a Fire Weather Index, is one of the main tools scientists and fire managers currently use to model carbon emissions in these boreal forests. This study suggests fuels should be a bigger component of those models. “When we think of climate change and wildfires, we often instinctively think of extreme weather conditions,” said Marc-André Parisien, a research scientist with the Canadian Forest Service and co-author of the study. “But our study shows that vegetation also matters–a lot! Predicting future vegetation is a tough nut to crack, but this study emphasizes the need to keep chipping away at it.”

The vegetation patterns they uncovered were complex–soil moisture, tree species composition, and stand age at the time of fire all interacted to predict combustion amounts. For instance, highly flammable black spruce was generally a predictor of carbon combustion, and the presence of this species increased with site moisture and stand age at the time of fire. But such interactions are likely to change with the climate. For example, as the climate warms and fire intervals shorten, black spruce stands are being replaced by deciduous trees and jack pine, which grow in shallower soils that release less carbon during fires. The site-level resolution of the study allowed the researchers to capture such dynamism in carbon combustion patterns, and offers clues about the way they may shift in the future.

“We really need to move beyond the misconception of the boreal forest as a monotonous stretch of forest,” said Sander Veraverbeke, assistant professor at Vrije Universiteit Amsterdam and co-author of the study. “While only a few tree species occur in the boreal forest, its diversity in ecosystem structure, forest age, topography, peatland occurrence and permafrost conditions is enormous, and our paper shows that these features dictate the carbon emissions from boreal fires. The good news is that we can map aspects of this fine-scale ecosystem variation with current tools from NASA and other space agencies. Now we need to do this at the continental scale.”

The level of detail this study captured offers modelers a framework for asking more questions about carbon, said Michelle Mack, senior author on the study and professor of biology at Northern Arizona University. “In the past, fire models have focused on fire behavior, not carbon emissions,” Mack said. “It’s only been in the last decade or so that we’ve seen a global effort to quantify how much carbon these fires are releasing. We hope that our observations about fuels will inform the models as we work to better understand the boreal forest’s emission trajectory.”

Parisien agreed. “We are figuring out that fire-vegetation feedbacks a lot stronger that we thought they were just a few years ago,” he said. “Of course, we’ll never be able to manage all of vast boreal biome–nor should we want to–but this helps us know what targeted actions, such as fire management or modifying forest vegetation, we can take to limit carbon loss.”

This work was supported by funding from the NASA Arctic Boreal and Vulnerability Experiment (ABoVE), the National Science Foundation RAPID program and Bonanza Creek LTER, the Natural Sciences and Engineering Research Council of Canada, the Government of the Northwest Territories Cumulative Impacts Monitoring Program; Polar Knowledge Canada’s Northern Science Training Program; and Vidi grant support from the Netherlands Organization for Scientific Research (NWO).