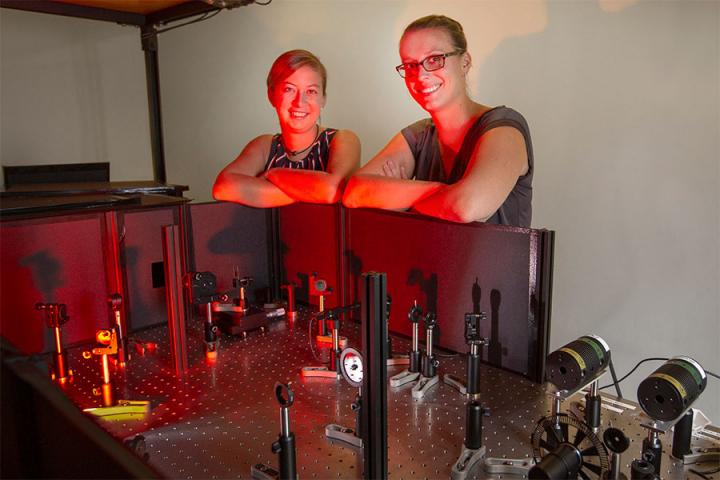 The designers of solar cells know their creations must contend with a wide range of temperatures and all sorts of weather conditions — conditions that can impact their efficiency and useful lifetime.

Florida State University Assistant Professor of Chemistry and Biochemistry Lea Nienhaus and former FSU postdoctoral researcher Sarah Wieghold are helping to understand the fundamental processes in a material known as perovskites, work that could lead to more efficient solar cells that also do a better job of resisting degradation. They found that small tweaks to the chemical makeup of the materials as well as the magnitude of the electrical field it is exposed to can greatly affect the overall material stability.

Their latest work is published in a pair of studies in Journal of Materials Chemistry C and Journal of Applied Physics .

“How can we make perovskites more stable under real-world conditions in which they’ll be used?” Nienhaus said. “What is causing the degradation? That’s what we’re trying to understand. Perovskites that don’t degrade quickly could be a valuable tool for obtaining more energy from solar cells.”

Perovskites are a so-called “soft material,” despite the ionic bonds of the crystal lattice that make up their structure. The halides or cations in the material can move through that lattice, which may increase their rate of degradation, resulting in a lack of long-term stability.

In the Journal of Materials Chemistry C paper, the researchers investigated the combined influence of light and elevated temperature on the performance of mixed-cation mixed-halide perovskites.

They found that adding a small amount of the element cesium to the perovskite film increases the stability of the material under light and elevated temperatures. Adding rubidium, on the other hand, led to worse performance.

“We found that depending on the choice of the cation, two pathways of degradation can be observed in these materials, which we then correlated to a decrease in performance,” said Wieghold, now an assistant scientist at the Center for Nanoscale Materials and the Advanced Photon Source at Argonne National Laboratory. “We also showed that the addition of cesium increased the film stability under our testing conditions, which are very promising results.”

They also found that a decrease in film performance for the less stable perovskite mixtures was correlated with the formation of the compound lead bromide/iodide and an increase in electron-phonon interactions. The formation of lead bromide/iodide is due to the unwanted degradation mechanism, which needs to be avoided to achieve long-term stability and performance of these perovskite solar cells.

In the Journal of Applied Physics paper, they explored the link between voltage and the performance of perovskite materials. This showed that the ion movement in the material changes the underlying electrical response, which will be a critical factor in the photovoltaic performance.

“Perovskites present a great opportunity for the future of solar cells, and it’s exciting to help move this science forward,” Nienhaus said.

Other researchers who contributed to the Journal of Materials Chemistry C paper include FSU graduate student Alexander Bieber, FSU doctoral candidate Masoud Mardani, and Theo Siegrist, professor of chemical and biomedical engineering at the FAMU-FSU College of Engineering. Additional contributors to the Journal of Applied Physics paper include staff scientists Nozomi Shirato of the Center for Nanoscale Materials and Volker Rose of the Advanced Photon Source and the Center for Nanoscale Materials at Argonne National Laboratory.

This research was supported by start-up funds from Florida State University and funding from the U. S. Department of Energy.