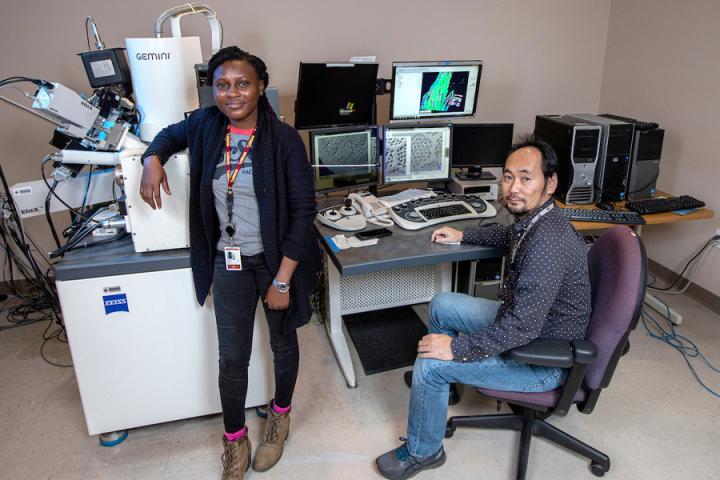 Florida State University researchers have discovered a novel way to improve the performance of electrical wires used as high-temperature superconductors (HTS), findings that have the potential to power a new generation of particle accelerators.

An image of Bi-2212, bismuth-based superconducting wires. (Mark Wallheiser/FAMU-FSU College of Engineering)
Researchers used high-resolution scanning electron microscopy to understand how processing methods influence grains in bismuth-based superconducting wires (known as Bi-2212). Those grains form the underlying structures of high-temperature superconductors, and scientists viewing the Bi-2212 grains at the atomic scale successfully optimized their alignment in a process that makes the material more efficient in carrying a superconducting current, or supercurrent. Their work was published in the journal Superconductor Science and Technology.

The researchers found that the individual grains have a long rectangular shape, with their longer side pointing along the same axis as the wire — a so-called biaxial texture. They are arranged in a circular pattern following the path of the wire, so that orientation is only apparent at very small scale. Those two properties together give the Bi-2212 grains a quasi-biaxial texture, which turned out to be an ideal configuration for supercurrent flow.

“By understanding how to optimize the structure of these grains, we can fabricate the HTS round wires that carry higher currents in the most efficient way,” said Abiola Temidayo Oloye, a doctoral candidate at the FAMU-FSU College of Engineering, researcher at the National High Magnetic Field Laboratory (MagLab) and the paper’s lead author.

Superconductors, unlike conventional conductors such as copper, can transport electricity with perfect efficiency because electrons encounter no friction while traveling in the superconducting wire. Bi-2212 wires belong to a new generation of high-field superconductors for building superconducting magnets, which are crucial tools for scientific research at labs around the world, including the National High Magnetic Field Laboratory where the team of researchers conducted their experiments.

“We optimized the Bi-2212 round wires to carry more current, while keeping in mind the scale difference between the lab and manufacturer,” Oloye said. “The process we develop in the lab has to scale to the manufacturing level for the technology to be commercially viable and we were able to do that in the study.”

Previous work done by Fumitake Kametani, an associate professor of mechanical engineering at the FAMU-FSU College of Engineering, MagLab researcher, and principal investigator for the study, showed the importance of quasi-biaxial texture in Bi-2212 round wires for currents. This paper continued the premise and demonstrated the factors needed to achieve optimal quasi-biaxial texture.

“The microstructural characterization used is unique in analyzing the crystal structure of Bi-2212 round wires,” Kametani said.”The technique is usually used for analyzing metals and alloys, and we have adapted it to develop novel sample preparation methods to further the optimization of Bi-2212 HTS wire technologies.”

The big-picture goal is to be able to use Bi-2212 round wires in future high-field magnet applications.

“Since it is the only high-temperature superconductor available in round wire form, the material can more easily replace existing technologies using LTS wires made from other materials,” Oloye said. “Other HTS such as REBCO and Bi-2223 are only available in tape form, which adds a layer of complexity to magnet design.”

Researchers from the FSU-headquartered National High Magnetic Field Laboratory and CERN contributed to this research.

The work was funded and supported by the U.S. Department of Energy, the National Science Foundation and the State of Florida.