The safe and reliable operation of nuclear reactors, and in the future also of fusion reactors, strictly depends on the quality of their cabling. However, research carried out at the National Center for Nuclear Research (NCBJ) in Świerk, Poland, shows that polymer cable insulations, exposed to high doses of radiation for decades, gradually lose their insulating properties. A group of physicists from NCBJ, led by prof. Jacek Jagielski,  not only got to know the details of this process, but also proposed an easy-to-use technique for detecting dangerous cables. 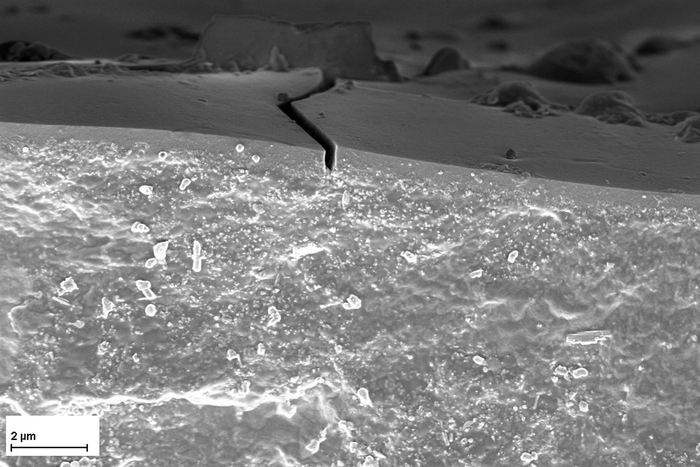 The safe and reliable operation of nuclear reactors, and in the future also of fusion reactors, strictly depends on the quality of their cabling. However, research carried out at the National Center for Nuclear Research (NCBJ) in Świerk, Poland, shows that polymer cable insulations, exposed to high doses of radiation for decades, gradually lose their insulating properties. A group of physicists from NCBJ, led by prof. Jacek Jagielski,  not only got to know the details of this process, but also proposed an easy-to-use technique for detecting dangerous cables.

The team of prof. Jagielski has been dealing with issues related to the modification of the surface layer of materials with ion beams for a long time. A few years ago, the attention of researchers was drawn to polymer seals. One of the Polish companies was in trouble at that time because of the sealings in the manufactured military equipment. The machines were exported to a country with a tropical and rainy climate. The seals in engines, in Poland operating without major problems, began to overheat and leak under the new conditions. Meanwhile, the contract forced the manufacturer to replace the entire defective power unit. Because of one gasket!

Overheating of gaskets used in moving mechanisms is a consequence of the high coefficient of friction of the polymers from which they are generally made. The group of prof. Jagielski decided to check whether ion irradiation affects the coefficient of friction. It turned out that a thin surface layer of polymer, about one micrometer thick, hardens considerably as a result of bombardment. Its friction coefficient decreased even ten times – and this despite the fact that it quickly covered with a network of cracks.

A significant reduction in the value of the friction coefficient of polymer gaskets means in practice a reduction of the wear of mechanical elements. Mechanisms equipped with modified gaskets will therefore work not only longer, but also more efficiently, especially since the surface cracks can be used as reservoirs of lubricant. In some cases, such as pneumatic actuators, the machine may work faster, leading to the increase of productivity. ­

“During the research on gaskets, we noticed that the electrical properties of polymers began to change due to radiation defects”, says prof. Jagielski. “So it seemed natural to ask another question: what happens to the insulation of cables exposed to radiation, if their insulation is also made of polymers?”

The issue may seem niche, but it takes on a different meaning at a time when the efficiency and safety of nuclear energy is beginning to be appreciated again. Modern nuclear power plants are designed with at least 60 years of operation in mind, more and more often with the possibility of extending up to a hundred. At the same time, each reactor must be equipped with several thousand kilometers of smaller and larger cables. Some of them will be exposed to neutron bombardment released during nuclear reactions for decades. In this situation, the question about the fate of the polymers that guarantee their insulation becomes a question about the energy security of millions of people.

In nuclear reactors, materials are exposed to neutrons and gamma radiation. However, the overwhelming majority of defects in the irradiated material are not caused directly by neutrons or photons, but by the atoms they knock out or the broken atomic bonds. In practice, therefore, material defects caused by neutrons do not differ substantially from those initiated by ions. Instead of carrying out cumbersome research in the reactor, the NCBJ team could use a prototype industrial ion implantator of their own design.

Such insulating materials as polyvinyl chloride (PVC), teflon (PTFE) and various types of rubber (natural, EPDM, NBR, SBR) were irradiated. Researchers were interested in the chemical composition of the modified surface layer, its physical structure and surface topography. The results of the measurements and their conclusions have just been presented in an extensive article published in the journal of the physical journal “Journal of Applied Physics”.­

“Polymers are mainly composed of carbon and hydrogen”,explains Anna Kosińska, the first author of the above-mentioned article, PhD. student. “The bonds between these elements are among the weakest and they are broken during bombardment with fast ions. The released hydrogen atom catches its colleague from the environment and in a molecular form it escapes from the material into the environment. What is left is amorphous carbon resembling adamantite, which is able to conduct electricity. All this together means that the polymer insulation of cables exposed to radiation will lose their insulating properties over time! ”.

The attention of NCBJ physicists was drawn to the fact that the surface layer of the polymer begins to shrink due to the release of hydrogen. As a result, it becomes denser than the original and up to ten times harder than the original. Meticulous research has established that there is a clear correlation between the changes in the mechanical properties of the cable insulation and its electrical resistance. In order to find out if the insulation is working properly, it is enough to measure the hardness of the cable insulation with a hand-held hardness tester.

“We realize that the method we propose to detect changes in the electrical resistance of polymer insulations is not perfectly precise. However, it has very significant functional advantages: it is simple, fast and allows you to almost immediately determine whether the tested cable becomes dangerous “, summarizes prof. Jagielski.