From smoke going round the world to aerosol levels, NASA observes Australia’s bushfires 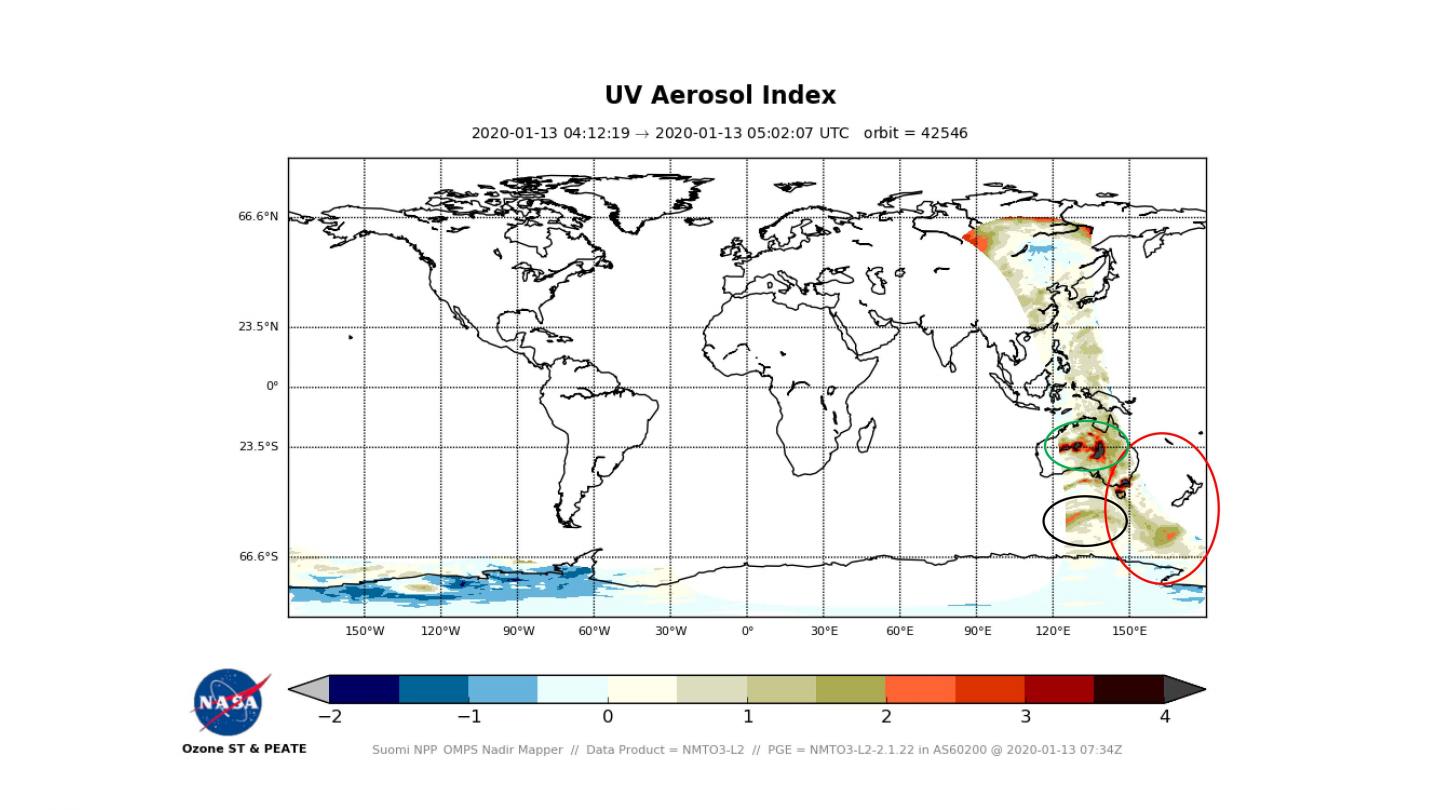 NASA scientists using data from its NOAA/NASA Suomi NPP satellite, has traced the movement of the smoke coming off the Australian fires across the globe showing that it has circumnavigated the Earth. In an image created from data gathered by the Ozone Mapping and Profiler Suite (OMPS) Nadir Mapper on Suomi NPP, a black circle shows the smoke which had been traced from its origins coming back to the eastern region of Australia after having traveled around the world. Suomi NPP carries carry five science instruments and is the first satellite mission to address the challenge of acquiring a wide range of land, ocean, and atmospheric measurements for Earth system science while simultaneously preparing to address operational requirements for weather forecasting. Suomi NPP also represents the gateway to the creation of a U.S. climate monitoring system, collecting both climate and operational weather data and continuing key data records that are critical for global change science.

NASA’s satellite instruments are often the first to detect wildfires burning in remote regions, and the locations of new fires are sent directly to land managers worldwide within hours of the satellite overpass. Together, NASA instruments detect actively burning fires, track the transport of smoke from fires, provide information for fire management, and map the extent of changes to ecosystems, based on the extent and severity of burn scars. NASA has a fleet of Earth-observing instruments, many of which contribute to our understanding of fire in the Earth system. Satellites in orbit around the poles provide observations of the entire planet several times per day, whereas satellites in a geostationary orbit provide coarse-resolution imagery of fires, smoke and clouds every five to 15 minutes.

NASA satellites can show the movement of the smoke across the globe as evidenced above, but other instruments found onboard can give scientists, firefighters, health experts, local government, and others information about what is happening on the ground in real-time.

So, too, air quality during events such as devastating bushfires is another serious concern to address and NASA satellites are able to help in this area as well.

The OMPS (Ozone Mapper and Profiler Suite of instruments) Aerosol Index layer on Suomi NPP is able to indicate the presence of ultraviolet (UV)-absorbing particles in the air (aerosols) such as desert dust and, in this case, soot particles in the atmosphere; it is related to both the thickness of the aerosol layer located in the atmosphere and to the height of the layer. The Aerosol Index is a unitless range from =5.00, where 5.0 (dark red) indicates heavy concentrations of aerosols that could reduce visibility or impact human health. The Aerosol Index layer is useful for identifying and tracking the long-range transport of volcanic ash from volcanic eruptions, smoke from wildfires or biomass burning events and dust from desert dust storms, even tracking over clouds and areas of snow and ice.

Aerosols absorb and scatter incoming sunlight, which reduces visibility and increases the optical depth. Aerosols have an effect on human health, weather and the climate. Aerosols are produced from many events including pollution from factories, smoke from fires, dust from dust storms, sea salts, and volcanic ash and smog. Aerosols compromise human health when inhaled by people with asthma or other respiratory illnesses. Aerosols also have an affect on the weather and climate by cooling or warming the earth, helping or preventing clouds from forming. The image below shows a huge area directly above the bushfires that is spewing extreme amounts of aerosols into the atmosphere creating a health hazard not only for residents in the area, but also for those affected when wind patterns carry that smoke on jet streams.

NOAA meteorologists incorporate Suomi NPP data into their weather prediction models to produce forecasts and warnings that help emergency responders anticipate, monitor and react to many types of natural disasters, including the bushfires plaguing Australia currently. Suomi NPP serves as an important link between the current generation of Earth-observing satellites and the next generation of climate and weather satellites. It observes the Earth’s surface twice every 24-hour day, once in daylight and once at night. In its orbit Suomi NPP flies 512 miles (824 kilometers) above the surface in a polar orbit, circling the planet about 14 times a day. The satellite sends its data once an orbit to the ground station in Svalbard, Norway and continuously to local direct broadcast users. The data collected by Suomi NPP can help save lives.

Not so fast: Some batteries can be pushed too far

Discovery of the photosensor for yellow-green light-driven photosynthesis in…

Scienmag May 9, 2019
Credit: COPYRIGHT (C) TOYOHASHI UNIVERSITY OF TECHNOLOGY. ALL RIGHTS RESERVED. Cyanobacteria, a type of…