From nuclei to neutron stars

How big is an atomic nucleus? How does the size of a nucleus relate to a neutron star? These tantalizing questions in physics were explored in a pair of experiments at the U.S. Department of Energy’s Thomas Jefferson National Accelerator Facility. 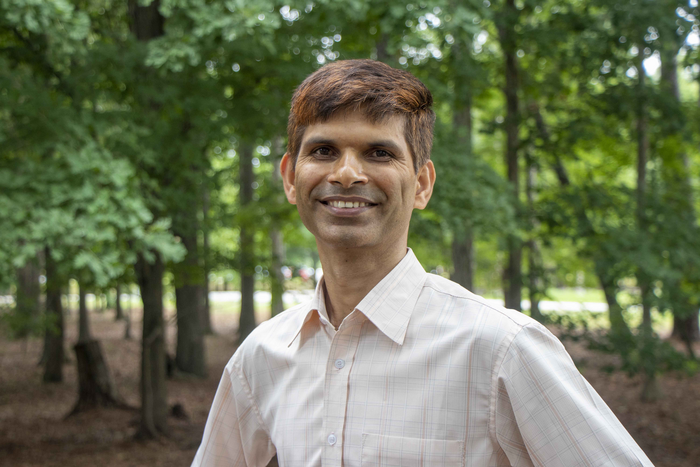 How big is an atomic nucleus? How does the size of a nucleus relate to a neutron star? These tantalizing questions in physics were explored in a pair of experiments at the U.S. Department of Energy’s Thomas Jefferson National Accelerator Facility.

Currently a postdoctoral associate at the Virginia Polytechnic Institute and State University (Virginia Tech) in Blacksburg, Virginia, Adhikari struggled to describe his appreciation for receiving the award.

“I don’t have a word to express it,” said Adhikari. “It’s the biggest achievement that I have earned so far. It means a lot.”

He wrote his winning thesis, “Neutron Skin Measurement of 208Pb Using Parity-Violating Electron Scattering,” while he was a doctoral student at Idaho State University in Pocatello.

A connection to neutron stars

A nucleus consists of neutrons and protons, with smaller, lighter nuclei containing roughly equal numbers of both particles. As the size of a nucleus increases, however, so does the number of neutrons relative to protons.

It’s commonly understood — but never precisely measured — that those excess neutrons form a layer of pure neutron matter on the surface of the nucleus referred to as the “neutron skin.” Larger, more asymmetric nuclei typically have thicker skins.

Since 2016, Adhikari has been helping to run two experiments at JLab — called PREX-II and CREX — to probe and measure the distribution of neutrons in heavier nuclei. Both were conducted in Experimental Hall A using the lab’s powerful Continuous Electron Beam Accelerator Facility (CEBAF).

Interestingly, the PREX-II measurement also correlates to the formation and structure of neutron stars — the collapsed cores of supergiant suns — even though they are 18 orders of magnitude larger than atomic nuclei.

“Both of them are neutron-rich and they have a mathematical connection,” Adhikari said. “So the measurement that we make in the neutron-rich nucleus can give us an idea of that giant neutron star.”

Evidence of that connection is in the wealth of citations to the PREX-II results that were published just over a year ago. Of roughly 170 citations and counting, Adhikari said, many are from papers in astrophysics.

The dream of physics

It’s mathematics that drew Adhikari to physics in the first place. He was born in a village in Nepal to farming parents who grew rice and corn and raised buffalo and goats. His mother and father were largely illiterate, but valued education for their children.

“It was their big dream to make us educated,” Adhikari said. “They sacrificed a lot of their lives, their time for us.”

He was a nominal student until the eighth grade, when he became intrigued by the sciences. By the 11th grade, his proficiency in math convinced him to pursue an education in physics. After graduating high school, he began to teach.

Adhikari arrived in the U.S. in 2015 to join the graduate program at Idaho State. He earned his doctorate nearly a year ago, and now his long-term career goal is to secure a position as a university professor or laboratory research scientist.

He and his wife and two children continue to live in Newport News, enabling him to continue his research at Jefferson Lab. While at Virginia Tech, he is focusing on the field of precision electroweak measurements.

The JSA Thesis Prize was established in 1999 to reward the top Ph.D. thesis on research related to Jefferson Lab science. It’s funded by the JSA Initiatives Fund program, which supports programs, initiatives and activities that further the scientific outreach and promote the science, education and technology missions of Jefferson Lab, and which benefit the laboratory’s user community.

“Every year, the JLUO board is confronted with the daunting task of selecting the best graduate student from a large pool of truly outstanding submissions. This year was no exception, and we should all be proud of the extremely high quality of young researchers,” said JLUO Chair Carlos Munoz-Camacho,  “Devi Lal Adhikari won the prize for his high-impact results that connect the structure of nuclei investigated at Jefferson Lab with the physics of stellar objects such as neutron stars. The committee was impressed by Adhikari’s personal contributions to two challenging experiments — PREX-II and CREX — that ran in Hall A and that are at the origin of his exciting findings. The JLUO board wholeheartedly congratulates Adhikari for his great accomplishment.”

Candidates are nominated by senior scientists with the support of three letters of recommendation. Judges weigh four criteria: the quality of the written work, the student’s contribution to the research, the work’s impact on the field of physics, and service — how the work contributes to Jefferson Lab or other experiments. The prize includes a $2,500 cash award and a commemorative plaque.