From nata de coco to computer screens: Cellulose gets a chance to shine 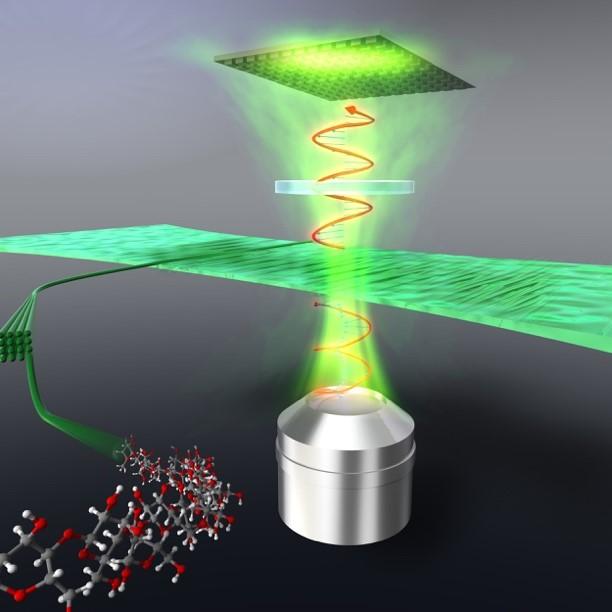 Osaka, Japan – A team at the Institute of Scientific and Industrial Research at Osaka University has determined the optical parameters of cellulose molecules with unprecedented precision. They found that cellulose’s intrinsic birefringence, which describes how a material reacts differently to light of various orientations, is powerful enough to be used in optical displays, such as flexible screens or electronic paper.

Cellulose is an ancient material that may be poised for a major comeback. It has been utilized for millennia as the primary component of paper books, cotton clothing, and nata de coco, a tropical dessert made from coconut water. While books made of dead trees and plain old shirts might seem passé in world increasingly filled with tablets and smartphones, researchers at Osaka University have shown that cellulose might have just what it takes to make our modern electronic screens cheaper and provide sharper, more vibrant images.

Cellulose, a naturally occurring polymer, consists of many long molecular chains. Because of its rigidity and strength, cellulose helps maintain the structural integrity of the cell walls in plants. It makes up about 99% of the nanofibers that comprise nata de coco, and helps create its unique and tasty texture.

The team at Osaka University achieved better results using unidirectionally-aligned cellulose nanofiber films created by stretching hydrogels from nata de coco at various rates. Nata de coco nanofibers allow the cellulose chains to be straight on the molecular level, and this is helpful for the precise determination of the intrinsic birefringence–that is, the maximum birefringence of fully extended polymer chains. The researchers were also able to measure the birefringence more accurately through improvements in method. “Using high quality samples and methods, we were able to reliably determine the inherent birefringence of cellulose, for which very different values had been previously estimated,” says senior author Masaya Nogi.

The main application the researchers envision is as light compensation films for liquid crystal displays (LCDs), since they operate by controlling the brightness of pixels with filters that allow only one orientation of light to pass through. Potentially, any smartphone, computer, or television that has an LCD screen could see improved contrast, along with reduced color unevenness and light leakage with the addition of cellulose nanofiber films.

“Cellulose nanofibers are promising light compensation materials for optoelectronics, such as flexible displays and electronic paper, since they simultaneously have good transparency, flexibility, dimensional stability, and thermal conductivity,” says lead author Kojiro Uetani. “So look for this ancient material in your future high-tech devices.”

The work is published in ACS Macro Letters as “Estimation of the Intrinsic Birefringence of Cellulose Using Bacterial Cellulose Nanofiber Films.” (DOI:10.1021/acsmacrolett.9b00024)

Osaka University was founded in 1931 as one of the seven imperial universities of Japan and now has expanded to one of Japan’s leading comprehensive universities. The University has now embarked on open research revolution from a position as Japan’s most innovative university and among the most innovative institutions in the world according to the Nature Index Innovation 2017. The university’s ability to innovate from the stage of fundamental research through the creation of useful technology with economic impact stems from its broad disciplinary spectrum.

Scienmag Jan 27, 2020
Led by the URV researcher Vladimir Baulin, this study has also discovered a new role of cholesterol that will help…

Chromosomal aberrations created during in vitro fertilization do not…

Autonomic nervous system appears to function well regardless of mode…