From Alpha to Epsilon: Consortium study illuminates surfaces of Spike most resistant to antibody escape

LA JOLLA, CA—Scientists at La Jolla Institute for Immunology (LJI) have published a detailed map of where human antibodies bind to SARS-CoV-2, a map that was generated by a global collaboration comparing nearly all leading clinical candidates. The new research, published in Science, will guide the development of more effective COVID-19 antibody therapies and help scientists develop effective vaccines to address emerging viral variants. 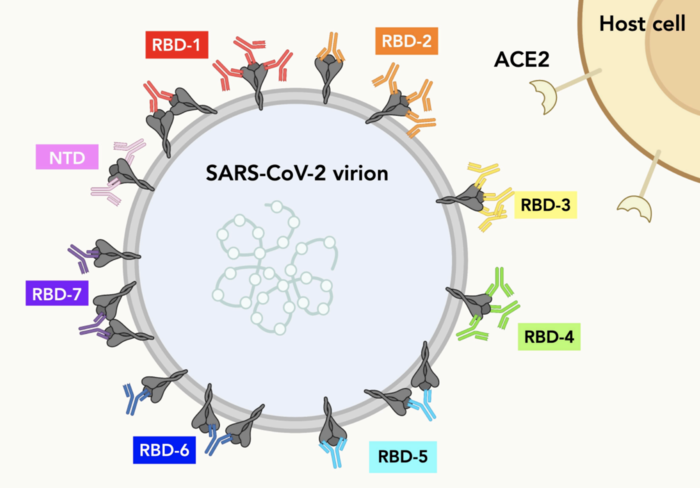 LA JOLLA, CA—Scientists at La Jolla Institute for Immunology (LJI) have published a detailed map of where human antibodies bind to SARS-CoV-2, a map that was generated by a global collaboration comparing nearly all leading clinical candidates. The new research, published in Science, will guide the development of more effective COVID-19 antibody therapies and help scientists develop effective vaccines to address emerging viral variants.

“We were able to map the geography of Spike and understand which antibodies bind to which footprints. This map provides a reference to help predict  which antibodies are still effective against SARS-CoV-2 variants of concern like the currently surging Delta variant,” says LJI Professor Erica Ollmann Saphire, Ph.D., who leads the global effort behind this research, called the Coronavirus Immunotherapeutic Consortium (CoVIC).

In fact, the researchers found three different groups of antibodies that are resistant to mutations in SARS-CoV-2 Spike protein. These antibodies could target vulnerable sites on the Spike protein, even as it mutates.

“We now have a framework for selecting durable antibody cocktails for COVID-19 treatment,” says Saphire.

The CoVIC includes about 370 antibodies from 59 different discovery efforts that cover a broad range: from academic labs and small biotechs to large international pharmaceutical corporations. These antibody therapeutics are being evaluated side-by-side in standardized lab by seven different partner labs. The Saphire team at LJI is determining high-resolution structures of these antibodies and also rapidly generated tools to examine the effects of mutations in Spike on antibody potency.

“CoVIC was formed to analyze a huge panel of monoclonal antibodies on equal footing,” says study co-first author Kathryn Hastie, Ph.D., an instructor at LJI. “The initial goal was to look at antibodies against the original SARS-CoV-2 strain, but it quickly became clear that the virus’s Spike protein was ever-evolving. The ability of the Spike to change has serious implications when you are talking about treating someone with a monoclonal antibody.”

“The CoVIC contributors used different strategies to find these antibodies,” adds study co-first author Haoyang Li, Ph.D., a postdoctoral fellow at LJI. “This breadth of antibodies makes our study more comprehensive than previous studies that might have looked at antibodies from a small pool of survivors.”

This systematic study on the huge pool of antibodies is a massive undertaking. This study provides a framework to understand, on a global scale, which antibodies are effective (or not) against which variants. This information will be key in narrowing the pool of antibodies from which to advance to further study. “Every member of our 25-person lab pitched in,” says Saphire.

The global effort is coordinated by Program Manager Dr. Sharon Schendel and involves blinding of the array of clinical candidates so all therapeutics are evaluated on an equal playing field. Also at LJI, Professor Bjoern Peters, Ph.D. is leading a team building the CoVIC Database that serves as the publicly available repository for all data collected by CoVIC partner labs. These data are freely accessible to other researchers looking to compare and contrast antibodies against SARS-CoV-2 Spike.  The combined information will help determine which antibodies would be candidates to advance toward clinical use.

A key site on Spike, called the receptor binding domain (RBD), sticks up like a rocky outcrop, and the Saphire lab scientists took to using mountaineering terms to describe its structure. The inner and outer faces of the RBD are connected by a central “valley”. A “peak” and a “mesa” tower asides. Head over the mesa and you look down on an “escarpment” below.

By seeing where antibodies bind with the RBD landscape, the researchers separated promising antibodies into “communities.”

“Communities are groups of antibodies that have the same behavior, meaning they can or cannot bind to the Spike protein at the same time as other antibodies,” says Schendel.

Antibodies know how to recognize specific viral structures. They see their targets and latch on to stop a virus from infecting cells. But what if their target mutates and the landscape an antibody recognizes suddenly looks a little different?

“A variant may be discovered weeks after it emerged—it’s an endless game of catch up,” says Saphire. “We needed to know which in our library of antibodies would be durable over the months and years ahead.”

The researchers needed to find antibodies that target “conserved” sites on the RBD. These are the sites that are so important for the viral life cycle that the virus probably couldn’t function if they mutated. The most effective antibodies are ones that target these conserved sites.

To find durable antibodies, Hastie generated a range of Spike proteins with different point mutations. These structures reflect those seen in variants of concern such as Alpha, Gamma and Delta.

For some antibodies, one or two mutations in Spike were enough to make them lose sight of their target. “We could see which kinds of antibodies were escaped by which mutations,” says Hastie. “That is really useful to know, since we can see these mutations in the real-world variants of concern.”

“Carterra volunteered to do this work on a pro-bono basis,” says Hastie. “I want to give kudos to Daniel and Carterra.”

The researchers aimed to find the best antibodies from different communities and put them together into an all-star team to take down the virus.

Through his work, Li assembled a “hit map” of where antibodies targeted the virus. The map shows that seven antibody communities target mutable, or conserved, areas on the Spike. Moreover, in contrast to the conventional studies that use the Fab version for structures, this work use whole IgGs to mimic and reveal how these antibodies protect cells from infection. Some IgGs target to SARS-CoV-2 Spike in a bivalent-binding manner, which increase the affinity and potency of the antibodies, whereas others tend to inactivate virions by cross-linking Spikes. “This is new information to the scientific community, and it is a good example of why we needed this more detailed antibody analysis,” says Li.

Not only did Li lead the structural biology effort, he also made sure that the structures were accessible—both in the paper but also by depositing the structural information in public databases so other scientists could access the data. “Haoyang was the driving force behind getting all these structures,” says Schendel. “His efforts were truly heroic.”

Science with a global impact

Three of the communities proved especially durable against mutations on the RBD.

“Those antibodies are really good candidates for use in monoclonal antibody therapies,” says Hastie. “If you are making an antibody cocktail, you’d want at least one of those antibodies in there because they are probably going to maintain their efficacy against most variants.”

Some COVID-19 patients can already access monoclonal antibody cocktails. As Schendel explains, the current cocktails have limitations: they work best if given before severe symptoms set in—and they must be given via I.V. in a clinical setting.

With this new study, the CoVIC is closer to developing more potent antibody therapies that could pack a punch against SARS-CoV-2 variants. More powerful antibody therapies might also be effective at a lower dose, says Schendel, making them a practical option for distribution in countries where medical care is less accessible. She hopes that one day, monoclonal antibody therapies could be given as a simple injection.

The CoVIC team is now working with partners on animal protection studies. Other CoVIC researchers are working to understand how neutralizing antibodies coordinate with immune system responses.

Some people feel that the worst days of the pandemic are long gone, but Americans continue to die of COVID-19, and many people around the world will not receive a COVID-19 vaccine for years.

“We have such a large population in the United States and around the world that is not vaccinated,” says Schendel. “If we can devise better monoclonal antibody therapies, there will be therapies available to them.”

The La Jolla Institute for Immunology is dedicated to understanding the intricacies and power of the immune system so that we may apply that knowledge to promote human health and prevent a wide range of diseases. Since its founding in 1988 as an independent, nonprofit research organization, the Institute has made numerous advances leading toward its goal:  life without disease.