A scientific team at the Facility for Rare Isotope Beams (FRIB) at Michigan State University (MSU) has developed a new optical detector. This development will enable scientific users to help generate new insights and breakthroughs in nuclear physics. The team’s findings are detailed in an “Editor’s Pick” paper published in Review of Scientific Instruments. 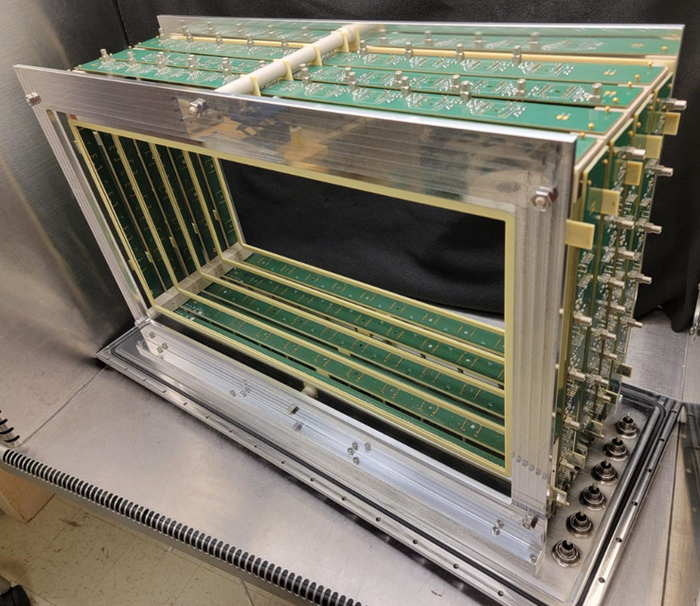 A scientific team at the Facility for Rare Isotope Beams (FRIB) at Michigan State University (MSU) has developed a new optical detector. This development will enable scientific users to help generate new insights and breakthroughs in nuclear physics. The team’s findings are detailed in an “Editor’s Pick” paper published in Review of Scientific Instruments.

The Energy Loss Optical Scintillation System (ELOSS) represents an advancement in both instrumentation and capabilities in experimental nuclear physics. The new detector allows researchers to study isotopes at a high beam rate and high performance.

ELOSS is supported by a three-year grant from the National Science Foundation, through the NSF Major Research Instrument (MRI) program.

“In experimental physics, innovation and advancements have always been closely linked to improvement in accelerators and colliders technologies,” said Marco Cortesi, Detector Systems group leader at FRIB and leader of the ELOSS project. “Modern powerful machines demand the development of innovative detectors capable of taking advantage of the new beam capabilities. FRIB is a new accelerator technology with an impressive discovery potential. Now, we have improved detecting equipment as well to advance and strengthen the ambitious scientific program at FRIB.”

For decades, researchers have used a conventional ionization chamber to identify the atomic numbers of heavy ions using an energy loss measurement. The FRIB researchers, however, broke tradition. They instead measured the light produced along the track with their optical ionization chamber in the focal plane of the S800 spectrograph at FRIB.

The multi-segmented optical detector is filled with xenon gas at pressures ranging from 400 to 800 Torr, a range around the pressure of the atmosphere. Photomultiplier tube arrays, standard tools for light detection, surround the gas and are placed along the direction of the beam to record the scintillation light. The number of detected photons is proportional to the energy deposited by the beam particle along its track in the effective detector volume. This allows scientists to identify the corresponding atomic number.

The ELOSS method offers several technical advantages compared to conventional charge readout systems. The team found ELOSS can measure the energy loss of heavy ions with nearly three times better resolution and at 10 times the counting rate, or the speed at which measurements can be taken.

“This saves time by enabling faster experiments and empowering researchers to collect more statistics at a quicker pace,” Cortesi said. “It unlocks opportunities for new experiments as well.”

Dziubinski, a physics doctoral student, played a prominent role in the effort. In addition to working on the assembly and calibration of the detector, Dziubinski also created a tabletop method to perform calibration, which Cortesi called critical to the project’s success.

“I’ve been building and running experiments the entire time I’ve been at MSU,” Dziubinski said. “Working on the ELOSS project has provided me with constant exposure to new tools and concepts in physics.”

Cortesi sees the involvement of student researchers like Dziubinski as crucial to the field’s long-term advancement. In training a new generation for detector research and development, he said researchers can better harness the power of FRIB’s accelerator technology and pursue cutting-edge physics with greater efficiency and vigor.

“ELOSS is an upgrade to improve particle identification, and there is more coming,” Cortesi said. “We want to take advantage of the opportunities FRIB offers. We can do that with this new detector.”

Michigan State University (MSU) operates the Facility for Rare Isotope Beams (FRIB) as a user facility for the U.S. Department of Energy Office of Science (DOE-SC), supporting the mission of the DOE-SC Office of Nuclear Physics. Hosting what is designed to be the most powerful heavy-ion accelerator, FRIB enables scientists to make discoveries about the properties of rare isotopes in order to better understand the physics of nuclei, nuclear astrophysics, fundamental interactions, and applications for society, including in medicine, homeland security, and industry.

The National Science Foundation’s mission is to advance the progress of science, a mission accomplished by funding proposals for research and education made by scientists, engineers, and educators from across the country.

The U.S. Department of Energy Office of Science is the single largest supporter of basic research in the physical sciences in the United States and is working to address some of today’s most pressing challenges. For more information, visit energy.gov/science.