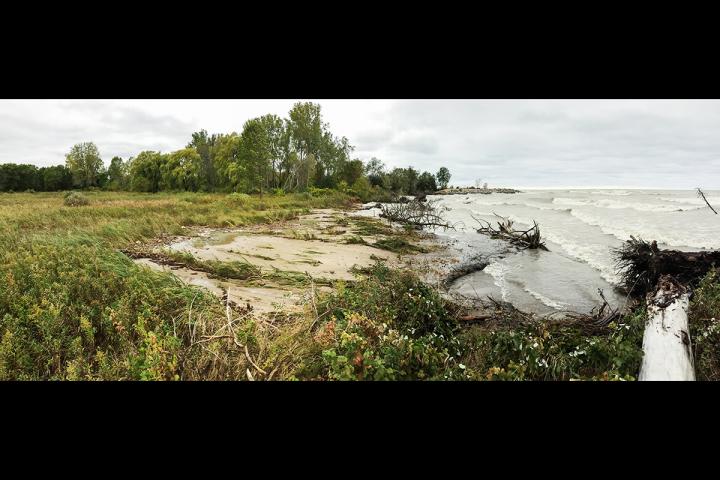 CHAMPAIGN, Ill. — Shoreline erosion can transform freshwater wetlands from carbon-storage pools to carbon sources, according to a new study led by Illinois State Geological Survey researchers. Wave action and high water levels sweep away soils and plants at a rate much higher than nature can replace them. An accurate measurement of this carbon budget imbalance may help better prioritize coastal management efforts and improve global carbon-cycle models.

Freshwater wetlands account for as much as 95 percent of all wetlands – freshwater and marine – and have one of the highest carbon-storage rates of any environment, the researchers said.

“There are a lot of coastal wetlands here in the Great Lakes region and they are recognized as important carbon-storage reservoirs,” said Ethan Theuerkauf, an Illinois State Geological Survey researcher and study co-author. “But, we want to know how erosion and landscape change may alter that carbon-storage capacity. That has not been explored before.”

The researchers developed a new model that works like those that assess the carbon budgets of coastal saltwater environments, but with modifications to account for the unique characteristics of freshwater ecosystems. The findings are published in the journal Scientific Reports.

Illinois Beach State Park – located along the shore of Lake Michigan just north of the Chicago area – is a coastal environment that has remained mostly undisturbed by human encroachment. This makes it an ideal location for a study that focuses on landscape change over time, the researchers said.

Collecting a series of vertical soil cores allowed the team to determine the age and amount of carbon present within intact layers of soil, sand and vegetation. “We start by sampling near the shore and move inland, collecting from the different environments like beaches, dunes, wetlands and so on,” said Katherine Braun, an ISGS researcher and lead author of the study. “It is like going back in time vertically and horizontally.”

The study found a large mismatch between how long it takes the carbon to accumulate versus how long it takes to erode, Braun said. “Ten percent of what took 500 years to accumulate disappeared in a six-month period. This wetland – or carbon reservoir, if you are looking at it from a carbon-budget perspective – took a permanent ding. The rate at which wetlands may rebuild can never catch up to the rate at which they were eroded.”

The study period coincides with the highest Lake Michigan water levels in approximately 30 years, Theuerkauf said, and he believes that is a major contributor to the high rates of erosion. “Many would think that storm events would be the major source of erosion, but we found that the less violent but chronic wave attack from choppy waters, combined with the higher lake level, appear to be the culprit here.”

The researchers plan to continue this study by tracking the fate of the eroded carbon. “That carbon may get redeposited elsewhere in Lake Michigan, or it could end up in the atmosphere,” Theuerkauf said. “Our continued work will allow us to expand the study across spatial parameters, not just time and not just around the Great Lakes region. The model can be applied to almost any freshwater coastal area.”

More isn’t better when it comes to evaluating chest pain

Membrane madness: The ins and outs of moving materials through the…