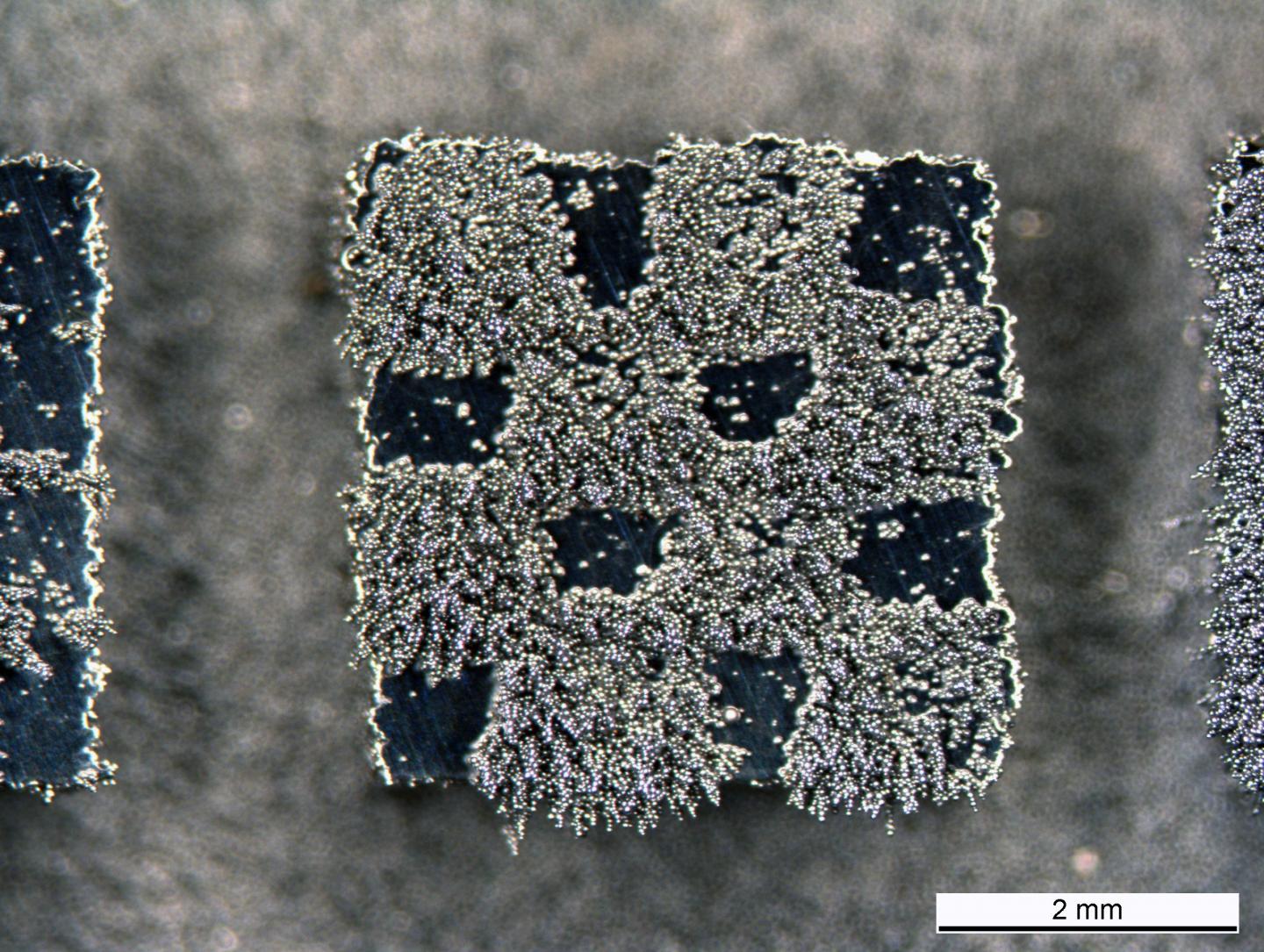 It looks quite inconspicuous to the casual beholder, hardly like groundbreaking innovation: a small metallic chessboard, four millimeters long on either side. At first glance, it shines like polished steel; at second glance, minute differences in color are visible: The tiny chessboard has 16 squares, eight appear slightly darker, the other eight a bit lighter.

The unassuming material sample goes to show that 3D printing with the help of laser beams and metal powder is not only suitable for creating new geometric shapes, but also for producing new materials with completely new functionalities. The small chessboard is a particularly obvious example: Eight squares are magnetic, eight non-magnetic – the entire piece has been 3D-printed from a single grade of metal powder. Only the power and duration of the laser beam varied.

As a starting point, an Empa team led by Aryan Arabi-Hashemi and Christian Leinenbach used a special type of stainless steel, which was developed some 20 years ago by the company Hempel Special Metals in Dübendorf, among others. The so-called P2000 steel does not contain nickel, but around one percent of nitrogen. P2000-steel does not cause allergies and is well suited for medical applications. It is particularly hard, which makes conventional milling more difficult. Unfortunately, at first glance it also seems unsuitable as a base material for 3D laser printing: In the melting zone of the laser beam, the temperature quickly peaks. This is why a large part of the nitrogen within the metal normally evaporates, and the P2000 steel changes its properties.

Turning a problem into an advantage

Arabi-Hashemi and Leinenbach managed to turn this drawback into an advantage. They modified the scanning speed of the laser and the intensity of the laser beam, which melts the particles in the metal powder bed, and thus varied the size and lifetime of the liquid melt pool in a specified manner. In the smallest case, the pool was 200 microns in diameter and 50 microns deep, in the largest case 350 microns wide and 200 microns deep. The larger melt pool allows much more nitrogen to evaporate from the alloy; the solidifying steel crystallizes with a high proportion of magnetizable ferrite. In the case of the smallest melt pool, the melted steel solidifies much faster. The nitrogen remains in the alloy; the steel crystallizes mainly in the form of non-magnetic austenite.

During the experiment, the researchers had to determine the nitrogen content in tiny, millimeter-sized metal samples very precisely and measure the local magnetization to within a few micrometers, as well as the volume ratio of austenitic and ferritic steel. A number of highly developed analytical methods available at Empa were used for this purpose.

The experiment, which seems like a mere gimmick, could soon add a crucial tool to the methodology of metal production and processing. “In 3D laser printing, we can easily reach temperatures of more than 2500 degrees Celsius locally,” says Leinenbach. “This allows us to vaporize various components of an alloy in a targeted manner – e.g. manganese, alumnium, zinc, carbon and many more – and thus locally change the chemical composition of the alloy.” The method is not limited to stainless steels, but can also be useful for many other alloys.

Leinenbach thinks about, for instance, certain nickel-titanium alloys known as shape memory alloys. At what temperature the alloy “remembers” its programmed shape depends on just 0.1 percent more or less nickel in the mixture. Using a 3D laser printer, structural components could be manufactured that react locally and in a staggered manner to different temperatures.

Fine structures for the electric motor of the future

The ability to produce different alloy compositions with micrometer precision in a single component could also be helpful in the design of more efficient electric motors. For the first time, it is now possible to build the stator and the rotor of the electric motor from magnetically finely structured materials and thus make better use of the geometry of the magnetic fields.

The crucial factor in the discovery of the relationship between laser power, the size of the melt pool and the material’s properties was the expertise in the field of Additive Manufacturing, which has been built up at Empa over the last nine years. Ever since then, Christian Leinenbach and his team, as one of the world’s leading research groups in the field, have devoted themselves to materials science issues related to 3D laser printing processes. At the same time, Empa researchers have gained experience in process monitoring, especially in measuring the melt pools, whose size and lifetime are crucial for the targeted modification of alloys.