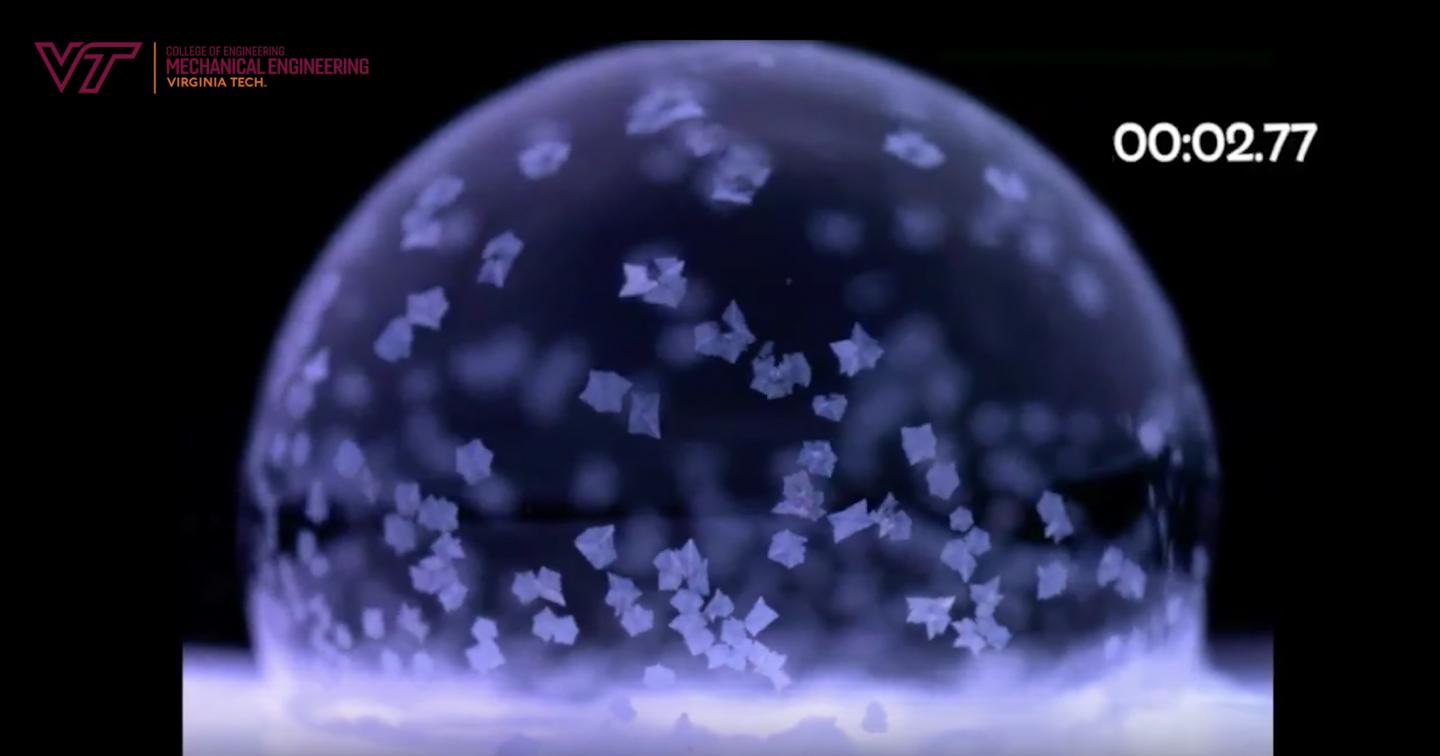 Scientific inquiry often begins with the “why.”

Without expecting to do more than answer a question posed by a YouTube video, Virginia Tech researchers may have changed how people think about the process of freezing.

Lead Virginia Tech researcher Jonathan Boreyko, an assistant professor in mechanical engineering in the College of Engineering, and his student researchers were watching a YouTube video of a soap bubble freezing. The mesmerizing sight of ice crystals floating around the bubble made the engineers wonder what caused the phenomenon.

Boreyko and student researchers Farzad Ahmadi and Saurabh Nath, both graduate students in engineering mechanics, and Christian Kingett, an undergraduate researcher in engineering science and mechanics who graduated in 2019, conducted literature research and found that no one had ever studied how soap films or bubbles freeze.

The results of the team’s query, which began as a simple “why,” has been published in the journal Nature Communications, explaining the physics behind what causes the ice crystals jump up into the bubble and swirl around, thus changing perceptions about the process of freezing.

“We started by freezing a bubble in the lab, using a frozen substrate,” Boreyko explained. “What we found was that the bubble would freeze from the bottom to a certain point and then stop. We didn’t get that lovely ‘snow globe effect’ that we saw on the video. But, Farzad made a nice model that can accurately predict where the freeze front will stop based on the size of the bubble and the air temperature.”

Because the shell of a bubble is microscopically thin, the warm air temperature in the lab prevented the cold stage from completely freezing the bubble. Moving to a walk-in freezer, the team tried the experiment again, believing they would discover how the floating ice crystals were formed.

“We didn’t see it in the freezer, either, at first,” Boreyko said. “But we tried again depositing the bubble on ice instead of a dry substrate, and that is where we saw what we were looking for.”

At minus 20 degrees Celsius and using an ice substrate, the bubble quickly filled with floating crystals that hastened the complete freezing of the bubble, and opened the researcher’s eyes.

“When you deposit the bubble on an icy substrate, the bubble begins to freeze, which releases heat,” said Ahmadi. “The bottom of the bubble, in this case, becomes warmer than the rest of the bubble – it’s freezing-induced heating.”

The molecular energy releases when the water molecules fuse together into a tight-packed solid lattice created a temperature difference of about 14 degrees – minus 20 at the top of the bubble and minus 6 degrees at the frozen base.

“The temperature gradient from top to bottom changed the surface tension,” Ahmadi said. “The tension created a flow from the hot toward the cold.”

This flow is known as Marangoni Flow. When it occurs in the freezing bubbles, the flow rips ice crystals from the bottom of the bubble and swirls them around the liquid shell where they enlarge until the entire bubble is frozen.

“Previously we thought that how fast we could freeze something depended on how fast the freeze front could grow,” Boreyko said. “This shows us that a freezing-induced Maragoni Flow will create hundreds of additional freeze fronts from the ice crystals removed from the bottom. So, we realized it’s not just how fast one front grows, but in cases like our bubble, you can manipulate the system to have hundreds of freeze fronts working together to freeze something much faster.”

Li-ion battery components to be printed on an inkjet printer