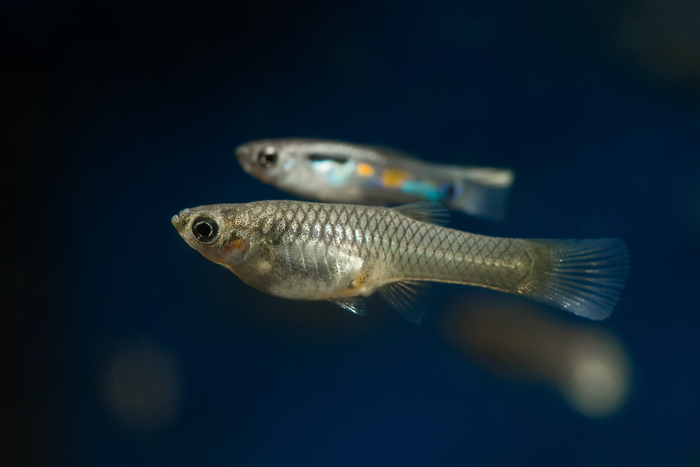 University of Exeter scientists examined how Trinidadian guppies reacted to stress – did they freeze or flee? – and also measured their hormonal responses.

The study found that some fish tend to produce more of the hormone cortisol, and that these fish are more likely to flee – while others produce less cortisol and tend to freeze. This pattern runs in families.

The findings could help in the breeding of less-stressed fish for aquaculture (fish farming) and other captivity such as aquariums.

“In the wild, an instinct to flee can help a fish escape from danger, and a rush of cortisol helps them cope with that stress,” said lead author Dr Tom Houslay, of the Centre for Ecology and Conservation (CEC) on Exeter’s Penryn Campus in Cornwall.

“But in captivity, this reaction is unhelpful – a chronic, high-cortisol stress response is harmful to health and welfare.

“Our finding of a genetic link between the hormonal (cortisol) and behavioural (freeze or flee) reactions suggests fish could be selected for breeding based on their freeze or flee response.

“By selecting fish that tend to freeze in a stressful situation, you create a genetic stock with a lower cortisol stress response.”

This approach is simpler than other breeding methods, some of which depend on blood sampling to identify genetic patterns.

“We need to stop thinking of fish as being all the same,” said Professor Alastair Wilson, also from the CEC at the University of Exeter.

“Individuals and groups of close genetic relatives vary, and by taking account of this we can selectively breed captive fish with lower stress and better health.”

Biologists have long believed that this “integration” of behavioural and hormonal responses must exist, but few formal genetic tests have been carried out.

In this study – by a team including the University of Alabama – researchers tested hormonal reactions by placing individual guppies in isolation for an hour. For a social fish like the guppy, the handling and isolation is likely to be a mild stressor.

During a stress response, elevated cortisol levels help to shift the body’s energy balance in order to cope with the stressor. This aids recovery, and prepares the body for any further stressor. Cortisol is a necessary part of coping with stress, but if this response is used too frequently then it can lead to health problems.

Cortisol leaks out through guppies’ gills, so their hormones were measured by testing the water after they returned to their usual tank.

Behaviour was tested separately, also by placing each guppy in a new tank, and seeing whether they tended to stay still (freeze) or swim around trying to escape (flee).

Hundreds of fish were observed in the study, and researchers looked at the “family tree” of each to see how genetic relatedness correlated with behavioural and hormonal similarities.

The study was funded by the Biotechnology and Biological Sciences Research Council (BBSRC).

The paper, published in the journal eLife, is entitled: “Genetic integration of behavioural and endocrine components of the stress response.”

Genetic integration of behavioural and endocrine components of the stress response.