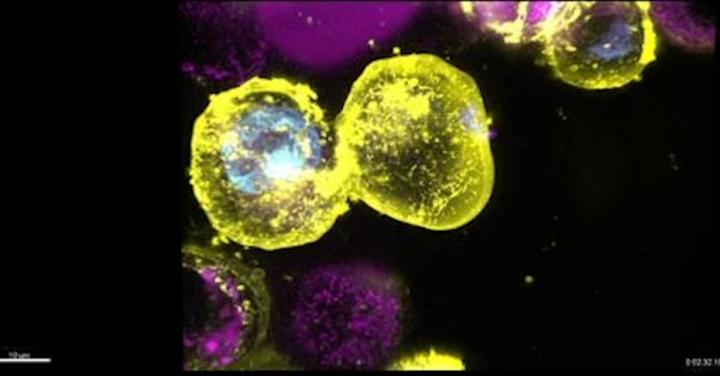 Small proteins called ‘monobodies’ were used to freeze MLKL at different stages as it moved from a dormant to an activated state, a key process that enables an inflammatory form of cell death called necroptosis. The team were able to map how the three-dimensional structure of MLKL changed, revealing potential target sites that might be targets for drugs – a potential new approach to blocking necroptosis as a treatment for inflammatory diseases.

The research, which was published in Nature Communications, was led by Associate Professor James Murphy and PhD students Ms Sarah Garnish and Mr Yanxiang Meng, in collaboration with Assistant Professor Akiko Koide and Professor Shohei Koide from New York University, US.

MLKL is a key protein in necroptosis, being the ‘executioner’ that kills cells by making irreparable holes in their exterior cell membrane. This allows the cell contents to leak out and triggers inflammation – alerting nearby cells to a threat, such as an infection.

Ms Garnish said MLKL was activated within a protein complex called a ‘necrosome’ which responded to external signals.

“While we know which proteins activate MLKL, and that this involves protein phosphorylation, nobody had been able to observe any detail about how this changes MLKL at the structural level. It happens so fast that it’s essentially a ‘molecular blur’,” she said.

A new technology – monobodies – developed by Professor Koide’s team, was key to revealing how MLKL changed.

Monobodies that specifically bound to different ‘shapes’ of MLKL were used to capture these within cells, Mr Meng said.

“These monobodies prevented MLKL from moving out of these shapes – so we could freeze MLKL into its different shapes,” he said.

“We then used structural biology to generate three-dimensional maps of these shapes which could be compared. This revealed that MLKL passed through distinct shape changes as it transitioned from being activated through to breaking the cell membrane.”

Associate Professor Murphy said the structures provided the first formal evidence for how MLKL changed its shape after it was activated.

“Until now, we’ve speculated that this happens, but it was only with monobodies that we could actually prove there are distinct steps in MLKL activation,” he said.

“Necroptosis is an important contributor to inflammatory conditions such as inflammatory bowel disease. There is intense interest in MLKL as a key regulator of necroptosis – and how it could be blocked by drugs as a potential new anti-inflammatory therapy.”

The Australian Synchrotron’s MX beamlines were critical infrastructure for the project.