A number of serious management and compliance issues were revealed on lion farms in the Free State province, South Africa, by a joint team of researchers from MONITOR, Blood Lions, and World Animal Protection. Potentially fraudulent activities relating to the use of microchips, operating without valid permits, and incomplete, inconsistent, and unclear record keeping were some of the irregularities found on commercial facilities that keep and trade captive lions and other predators. 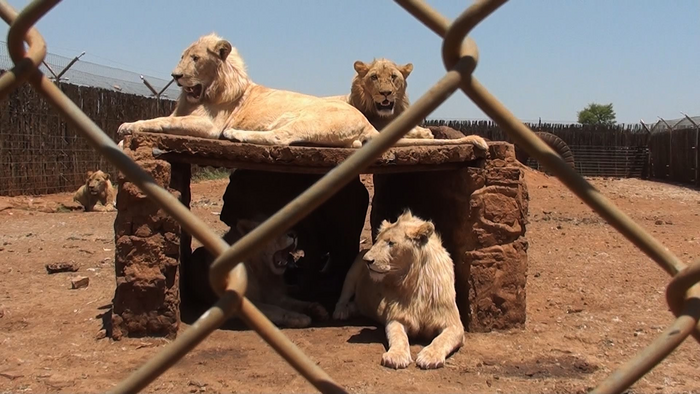 A number of serious management and compliance issues were revealed on lion farms in the Free State province, South Africa, by a joint team of researchers from MONITOR, Blood Lions, and World Animal Protection. Potentially fraudulent activities relating to the use of microchips, operating without valid permits, and incomplete, inconsistent, and unclear record keeping were some of the irregularities found on commercial facilities that keep and trade captive lions and other predators.

African lions are legally farmed in South Africa for commercial uses in interactive tourism activities, such as cub petting, voluntourism, or the “canned” hunting industry (where captive-bred lions are released into a confined space to be killed for sport). Other reasons include trade in live animals, or selling their body parts for the needs of traditional Asian Medicine.

All lions born and kept on commercial farms in South Africa should be registered with the provincial authority and fitted with a unique identification microchip, in order for each animal to be followed from birth to death through the system and to avoid the laundering of wild-caught and/or non-registered captive-bred lions.

A multinational team of researchers used permit data legally obtained from provincial authorities to summarise such uses of lions on farms in the Free State and found multiple instances of violation of national and provincial regulations.

It is known that the Free State province is at the heart of the commercial lion industry, with about a third of all lion facilities across the country located on its territory. These farms in the Free State predominantly breed, keep and euthanise lions, as well as trade with other provinces to supply “canned” hunting farms and tourism facilities. They also prepare lion body parts for export, such as taxidermy for trophies, and skeletons for the bone trade with Southeast Asia.

During a four-year period (2017-2020), more than 500 unique microchips (11% of the total microchip numbers) could not be followed through the system. For euthanasia permits, the number of potentially fraudulently used microchip numbers of lions was as many as 15%, and in some cases a microchip number had been reused up to four times.

“Although some of these inconsistencies may have legitimate explanations, the number of times microchip numbers were reused is worrisome and requires further investigation by the authorities”, states Dr Sarah Heinrich of MONITOR, one of the researchers behind the study, which was published in the journal Nature Conservation.

The laundering of lions and/or other predators through the fraudulent use of microchips has implications beyond South Africa’s borders, in particular, in the trade in lion bones for traditional medicine, where bones, claws, skeletons, and skulls are exported to Southeast Asia. “Looking at live lion exports through the Convention on International Trade in Endangered Species of Wild Fauna and Flora (CITES), it is unclear what happens to these animals once they arrive at their international destinations. It is possible that some of these live exports circumvent the zero CITES lion bone export quota and are eventually euthanised at their import destinations to feed the persisting demand for lion bones”, said Dr Jennah Green of World Animal Protection.

Lions that were euthanised in the Free State in 2019 and 2020, during a CITES zero export quota for lion bones, most likely became part of a growing and largely unregulated stockpile of lion bones that exists in South Africa, which warrants further investigation.

Ensuring regulatory compliance in all areas of the commercial captive lion industry is more important now than ever. In 2021, Minister Barbara Creecy of the Department of Forestry, Fisheries and the Environment (DEFE), stated that the South African government intends to effectively end the commercial captive lion industry through a mandatory phase-out, which eventually was changed to a voluntary scheme.

In its current state, the lion farming industry is governed by a patchwork of contrasting legislation across multiple provincial and national authorities, with disparities and legal loopholes, which create opportunity for harmful and fraudulent activity.

“Our research highlights many areas of grave concern and these issues need the urgent attention of the Minister and the DFFE, as well as the nine provincial nature conservation authorities, to put stricter enforcement of the TOPS Regulations in place”, concludes Dr Louise de Waal, Director of Blood Lions.