Robert Gourdie, a trailblazing cardiovascular scientist at the Fralin Biomedical Research Institute at VTC, is the first Virginia Tech researcher to receive an Outstanding Investigator Award from the National Institutes of Health (NIH). 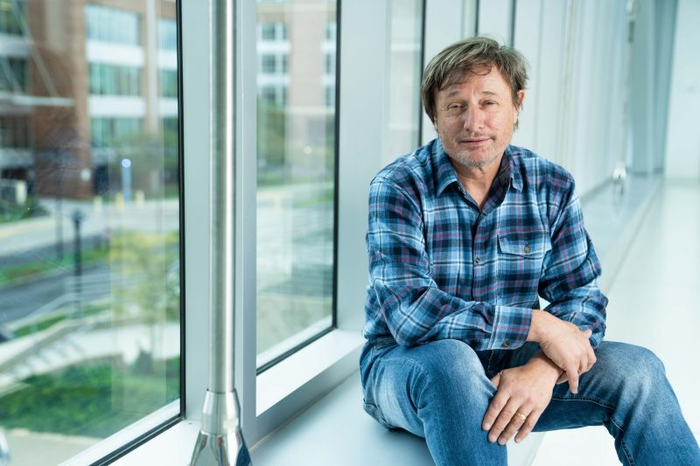 Robert Gourdie, a trailblazing cardiovascular scientist at the Fralin Biomedical Research Institute at VTC, is the first Virginia Tech researcher to receive an Outstanding Investigator Award from the National Institutes of Health (NIH).

The seven-year, $6.4 million grant is funded by the National Heart, Lung, and Blood Institute, part of the NIH. Known as an R35, the grant provides Gourdie with increased freedom to carry out inventive research concepts that aren’t tethered to specific, finite projects.

“It’s a privilege to be able to do this work, knowing that I have the funding agency’s trust to pursue research that I believe is critically important,” said Gourdie, the Commonwealth Research Commercialization Fund Eminent Scholar in Heart Reparative Medicine Research and director of the Fralin Biomedical Research Institute Center for Vascular and Heart Research.

For decades, Gourdie’s research has focused on how cells in the body communicate with each other and applying that knowledge to treat disease.

Now, his research in intercellular communication has yielded novel therapeutic approaches to a variety of medical challenges including: preventing heart attack damage, healing chronic wounds, improving the appearance of surgical scars, sensitizing treatment-resistant glioblastoma to chemotherapy, and treating aggressive forms of cancer. His lab has also pioneered the extraction and development of organic nanocapsules, called exosomes, which can deliver fragile peptide drugs to the heart, brain and other difficult-to-reach tissues.

Investigating the Molecular Nuances of Heartbeats

Since he began drawing plants and animals as a child in New Zealand, Gourdie has always been inspired by nature’s exquisite design. Today, donning his office wall is a sketch by Leonardo DaVinci illustrating the pumping motion of the heart – a focus of Gourdie’s research for the past 35 years.

To target these proteins, Gourdie and his laboratory developed a new drug that helped reduce damage caused by a heart attack in mouse models – even when applied 20 minutes after the injury. His laboratory continues to study this peptide in animal models to determine its effectiveness and safety, with the goal of one day bringing it to the clinic to help patients.

The molecule appears to work by interrupting intercellular communication and preventing the “bystander effect” – an adaptive response during which healthy cells receive signals from injured ones, recruiting the healthy cells to prematurely self-destruct.

While his study of gap junction proteins has yielded numerous fundamental discoveries including many with clinical applications, Gourdie has also noticed a more elusive electrical pathway in the heart that too plays an essential role in regulating heartbeats. In the ‘90s, Gourdie was surprised to find that birds naturally lack certain types of connexin proteins needed to make gap junctions. Other studies on genetically modified mice without gap junctions, indicated that the cardiac muscle in these animals functioned well enough to support heart electrical and pumping activity.

But how can a heart beat without gap junctions?

This question motivated Gourdie to take a closer look at the molecular structures in the heart. Using state-of-the-art microscope techniques, Gourdie’s laboratory discovered that wedged between heart muscle cells close to gap junctions are tiny conductive pockets of extracellular space. He dubbed this structure the “perinexus” in 2011. Seven years later, Gourdie published a study showing that specialized adhesion molecules stabilize the perinexus, contributing to conduction of electrical activity between heart muscle cells via a process called ephaptic coupling.

He and Steven Poelzing, associate professor at the Fralin Biomedical Research Institute and a leading ephaptic coupling researcher, have collaborated to show how the perinexus functions in arrhythmic diseases of the heart and together they organized the world’s first International Ephaptic Coupling Conference in 2019.

More than a decade ago, Gourdie and his then-postdoctoral associate Gautam Ghatnekar at the Medical University of South Carolina invented a novel peptide with surprising clinical effects.

That peptide, alphaCT1, proved beneficial as a topical treatment to accelerate wound healing. Together, Gourdie and Ghatnekar formed a biopharmaceutical company, FirstString Research, to bring the drug to market. The company has closed $55 million in Series B, C, and D funding since 2019 and is evaluating the drug’s use in surgical wound healing, chronic wound healing, radiation therapy wound healing, and corneal tissue repair in clinical trials.

“It’s quite unusual for a drug compound to be developed as part of a basic NIH science grant and move to phase III clinical testing,” Gourdie said. “I think this distinctive achievement was a helpful factor in getting the R35 funded.”

Over the years, Gourdie has continued to study the peptide’s effects in a variety of contexts ranging from wound healing to cancer treatments.

Last year, he published a study revealing why alphaCT1 helps improve the appearance of surgical scars – a finding that could help surgeons improve patient outcomes. This year, Zhi Sheng, assistant professor at the Fralin Biomedical Research Institute, and Gourdie published a study together in Oncogenesis describing a novel treatment for glioblastoma that combines alphaCT1, chemotherapy, and another protein-targeting drug.

Deemed a ‘rising star’ in drug delivery, exosomes are naturally occurring nanocapsules that cells produce to protect and courier delicate signaling molecules throughout the body. Gourdie’s laboratory has invented a new way to extract, purify, and load them with medicine with his latest venture, The Tiny Cargo Company.

Many drugs are too fragile to be administered orally and subjected to the harsh conditions of digestion, which is why vaccines and mRNA drugs are commonly administered via injection.

“Imagine instead of getting a vaccine shot, your nurse hands you a milkshake instead. Another milkshake may contain exosomes loaded with a therapeutic peptide designed to protect internal organs such as the heart from myocardial infarction,” Gourdie said. “Improving the viability of using exosomes opens up a wide range of drug delivery methods with unlimited clinical applications.”

Gourdie is encouraged by the NHLBI’s support.

“It speaks to the strength and the farsightedness of the National Heart, Lung, and Blood Institute,” Gourdie said. “They’re willing to support those taking intellectual risks to push the frontiers of scientific discovery.”

Co-investigators on the grant include Poelzing, Jamie Smyth, associate professor at the Fralin Biomedical Research Institute, and Giulio Menciotti, assistant professor in the Virginia-Maryland College of Veterinary Medicine.

He joined the Fralin Biomedical Research Institute and Virginia Tech’s department of biomedical engineering and mechanics in the College of Engineering in 2012.