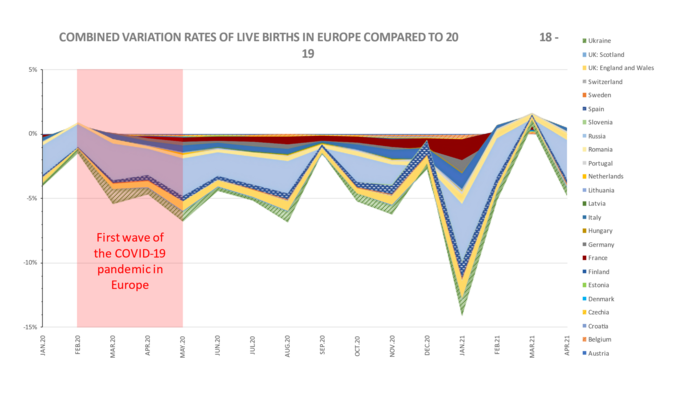 The researchers of the study, which is published today (Friday) in Human Reproduction [1], one of the world’s leading reproductive medicine journals, say that the decrease may be associated with the lockdowns imposed in many European countries rather than to people becoming infected with COVID-19 and encountering problems as a result of infection, such as deaths, miscarriages or still births. For this to be the case, there would have been a drop in live births just a few weeks or months after exposure to COVID-19, which they did not observe

First author of the study, Dr Léo Pomar, a midwife sonographer at Lausanne University Hospital and associate professor at the School of Health Sciences in Lausanne, Switzerland, said: “The decline in births nine months after the start of the pandemic appears to be more common in countries where health systems were struggling and capacity in hospitals was exceeded. This led to lockdowns and social distancing measures to try to contain the pandemic.

“The longer the lockdowns the fewer pregnancies occurred in this period, even in countries not severely affected by the pandemic. We think that couples’ fears of a health and social crisis at the time of the first wave of COVID-19 contributed to the decrease in live births nine months later.”

Previous pandemics in the 20th and 21st centuries, such as the 1918 Spanish flu pandemic and the 2013 Ebola and 2016 Zika virus outbreaks were associated with a decline in birth rates nine months after their peaks. The reasons were the high death rates in parents for the first two pandemics and high foetal death rates as a result of direct exposure to Zika. The desire of couples to postpone pregnancy in a time of crisis also played a role. The researchers of the current study wondered whether a similar trend would be seen after the COVID-19 pandemic.

They looked at data from 24 European countries [2] for the periods immediately before and after the first wave of the COVID-19 pandemic. They adjusted the live birth rates to take account of seasonal variations and found that January 2021 was the only month in which there was a significant drop in live births.

March 2021 was the only month with a live birth rate similar to the pre-pandemic monthly rate, corresponding to a rebound nine to ten months after the end of lockdowns. However, the researchers say that this rebound does not seem to compensate for the decline in birth rates in January 2021.

“The association we found with the duration of lockdowns may reflect a much more complex phenomenon, in that lockdowns are government decisions used as a last resort to contain a pandemic. Lockdown duration has a direct impact on couples,” said Dr Pomar.

He said that the information from this study was important for health services and policy makers. “It is of particular importance for maternity services, which could adapt staffing levels to birth patterns after pandemics: fewer pregnancies are expected at the time of pandemics, but a rebound in pregnancies could be observed after the end of them. The fact that the rebound in births does not seem to compensate for the decrease in January 2021 could have long-term consequences on demographics, particularly in western Europe where there are aging populations.”

Dr Pomar and his colleagues plan to see if there are similar trends after the subsequent waves of the pandemic and lockdowns. “Over time, the pandemic becomes endemic, its consequences during pregnancy are better known, vaccination is available, and it is possible that this decline in births has been mitigated in subsequent waves,” he said.

Limitations of the study are that it was based on national data, which might limit the ability to identify other potential factors contributing to a decrease or increase in live births, and the researchers collected data only up to April 2021, which makes it impossible to identify seasonal differences in birth for 2021.

Professor Christian De Geyter, of the University of Basel, Switzerland, was not involved in the research and is a deputy editor of the journal, Human Reproduction. In a commentary accompanying the paper [3], he writes: “These observations are important because they show that human reproductive behaviour, as evidenced by numbers of live births, changes during dramatic events, epidemics and global crises . . . Fewer live births will result in more rapidly aging populations and in lesser economic growth. Some rebound of the live birth numbers after each of these crises may mitigate these constraints, but sequential multiple crises may also result in live birth numbers not recovering . . . People are now aware that profound stressors during pregnancy may affect placental function, neonatal health and even future fertility . . . Undulating fertility aspirations caused by crises will invariably affect fertility treatment; furthermore, temporal fluctuations in live birth numbers will impact on the strain on obstetrical care units, schooling facilities and, ultimately, national socioeconomic stability.”

[1] “Impact of the first wave of the COVID-19 pandemic on birth rates in Europe: a time series analysis in 24 countries”, by Léo Pomar et al. Human Reproduction journal. doi:10.1093/humrep/deac215

Impact of the first wave of the COVID-19 pandemic on birth rates in Europe: a time series analysis in 24 countries

No conflict of interest