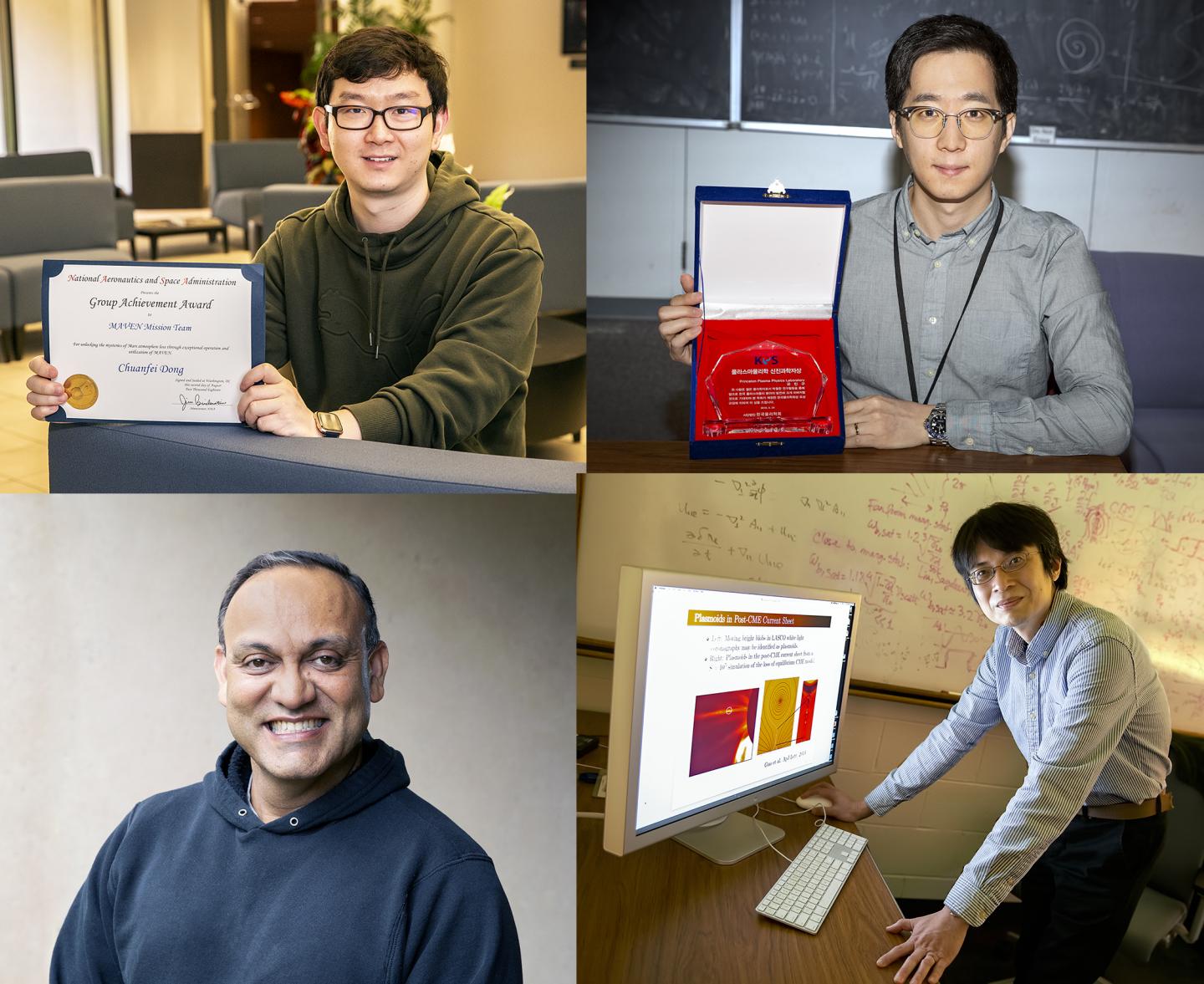 Institutions ranging from NASA to the Korean Physical Society have recently bestowed national and international honors on four scientists at the U.S. Department of Energy’s (DOE) Princeton Plasma Physics Laboratory (PPPL). The awards recognize a veteran and three early career physicists for their path-setting achievements in fusion and plasma science research. The honorees and their notable contributions:

Rajesh Maingi, head of boundary physics and deputy head of the ITER & Tokamak Department at PPPL, has been named a Fellow of the American Nuclear Society (ANS), the highest membership grade of the society.

“I am deeply honored to be selected as a Fellow of the American Nuclear Society, in the Fusion Energy Division,” said Maingi. “This recognition is for contributions in the advancement of nuclear science and technology, an area that is crucial to the advancement of fusion energy, and one that I have given increasing attention over the past decade.”

The ANS, an organization of scientists, engineers, and other professionals, is devoted to peaceful applications of nuclear science and technology. With 11,000 members from more than 40 countries, the society sponsors meetings, publishes journals, establishes standards, communicates nuclear science to the public, and bestows honors on luminaries in the field.

Maingi conducts experiments on a suite of domestic and international fusion machines in the area of edge plasma physics and serves as the principal investigator of a U.S.-sponsored international collaboration focused on plasma-materials interactions. Recently, he has been studying the behavior of components coated with lithium, the characteristics of surfaces made up of liquid lithium, and the effects of lithium aerosol sprayed directly into the plasmas that fuel fusion reactions. Maingi also studies how injecting various types of impurity powders and granules into a fusion plasma can preserve the plasma’s stability. He will be designated a Fellow at the June 9-13 ANS annual meeting in Minneapolis.

Maingi earned his doctorate and bachelor’s degrees from North Carolina State University. He joined PPPL in 2012 after serving on long-term assignment to the PPPL National Spherical Tokamak Experiment (NSTX) from Oak Ridge National Laboratory. A fellow of the American Physical Society, he has received many awards, including PPPL’s Kaul Prize for Excellence in Plasma Physics Research and Technology Development, a PPPL Distinguished Research Fellow award, and two scholarships from the U.S. Department of Energy to study fusion energy. Maingi also has served on many fusion-related panels. His roles have included chairing the 23rd International Conference on Plasma Surface Interactions in Controlled Fusion Devices, and leading the Fusion Energy Sciences Advisory Committee’s Transformative Enabling Capabilities panel.

Chuanfei Dong, an astrophysicist at PPPL and the Princeton University Department of Astrophysical Sciences, has won a 2018 Group Achievement Award from NASA for his work with the MAVEN Mission Science Team on computer modeling data aimed at explaining how Mars has lost most of its atmosphere. The MAVEN is an orbiter that is collecting data about the upper atmosphere of Mars.

Dong and the MAVEN Science Team received the award in April at the MAVEN Project Science Group meeting in Maryland. The award is the third that Dong and the team have received from NASA. They received a 2016 Group Achievement Award and a Robert H. Goddard Exceptional Achievement in Science Award in 2016.

The MAVEN team is studying how Mars transformed from a climate that was wet and warm with a thicker atmosphere four billion years ago to the current cold and dry planet where the average temperature is 50 degrees Centigrade below freezing. Within the MAVEN team, Dong is primarily responsible for modeling the atmospheric loss from Mars, which has a long-term impact on the Martian atmosphere evolution and climate change over its history.

Dong joined PPPL in 2016 as a postdoctoral fellow supported by NASA’s Living With a Star Jack Eddy Postdoctoral Fellowship and was appointed to the staff of PPPL and Princeton University in 2018. He was recently awarded the National Academy of Science New Leaders in Space Science.

Yoo has worked at PPPL for the past year after earning a doctorate in nuclear physics from Seoul National University, from which he graduated with a bachelor’s degree in physics and nuclear science.

He received the Young Scientist award for his graduate research on the process that converts a neutral gas to a plasma in the doughnut-shaped fusion reactor called a tokamak. Yoo was first author of a paper on the subject published online in Nature Communications last August. “I am very happy. It is my honor to get this award,” Yoo said.

Yoo’s research shows the limitations of previous theories on how a gas becomes ionized. One major theory, the Townsend “avalanche theory,” holds that ionization occurs when electrons are accelerated by an electric field, collide with gas molecules and free more electrons, causing an avalanche that allows the gas to become electrically conductive. Yoo found that the theory does not explain results in magnetic fusion experiments done on the Korea Superconducting Tokamak Advanced Research (KSTAR) facility. Yoo and fellow researchers developed an alternative theory that the gas breaks down through a turbulent avalanche that produces a strong electric field between charged particles. Yoo calls the process the “self-generated electric field.”

Yoo now works with Weixing Wang and other physicists at PPPL on a gyrokinetic tokamak simulation (GTS) code aimed at understanding the physics of the disruption phase of a plasma experiment.

Yi-Min Huang, a member of the Princeton Center for Heliospheric Physics based at PPPL and Princeton University, has won the 2019 Predhiman Kaw Legacy Award in Plasma Physics and Fusion Studies. The international award, begun last year by the family of the late Predhiman Kaw, the father of India’s nuclear fusion program, honored Huang “for his seminal work on plasmoid reconnection and instability of line-tied magnetic fields.”

Kaw, who died in 2017 at age 69, was a physicist in the Theory Department of PPPL from 1967 to 1971 before returning to India to lead the country’s plasma physics and fusion program. In that capacity he led India’s effort to join the international ITER experiment.

The annual Kaw Legacy Award, given to scientists between the ages of 45 and 55, comes with an engraved plaque and a cash prize of $5,000. The honor “comes as a surprise and is very deeply humbling,” Huang said. “I am grateful to the family of Professor Kaw for acknowledging my work.”

Huang earned his doctorate in physics from the University of Maryland after receiving a bachelor’s of science degree from National Taiwan University, where he held a national scholarship for gifted students in mathematics and natural science. He joined the Center for Heliophysics in 2013 following service as a visiting scientist at PPPL. Prior to PPPL he served as a researcher at the University of New Hampshire and the University of Wisconsin-Madison.

Huang investigates how a phenomenon called “plasmoid instability” creates bubbles in plasma that can lead to rapid magnetic reconnection — the process by which magnetic field lines break apart and reconnect violently. His findings, developed primarily in collaboration with Princeton University Professor and head of PPPL’s Theory Department Amitava Bhattacharjee and others, have brought about a qualitative change in how people think of fast magnetic reconnection, and have inspired new laboratory experiments and interpretations of satellite data from space. With Professor Ellen Zweibel of the University of Wisconsin-Madison, Huang has also made novel contributions to the stability of magnetic fields tied to a boundary, such as the surface of the sun or the wall of a tokamak fusion facility.

PPPL, on Princeton University’s Forrestal Campus in Plainsboro, N.J., is devoted to creating new knowledge about the physics of plasmas — ultra-hot, charged gases — and to developing practical solutions for the creation of fusion energy. The Laboratory is managed by the University for the U.S. Department of Energy’s Office of Science, which is the largest single supporter of basic research in the physical sciences in the United States, and is working to address some of the most pressing challenges of our time. For more information, please visit energy.gov/science.

Dynamic transition of the blood-brain barrier in the development of…

Micro and nano materials, including clothing for Olympic athletes