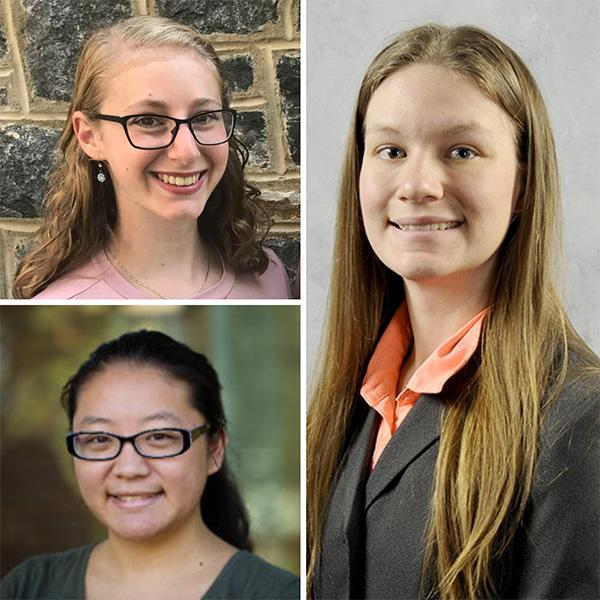 It was midnight on a Tuesday and Sydney Yang, a Lehigh University bioengineering major, was still up studying, as usual. The note appeared in her inbox, and at first she wondered who would be emailing her so late. And then she saw who it was from.

“I clicked on it,” says Yang, “and the first line said, ‘Congratulations, you’ve been awarded the NSF [Graduate Research Fellowship],’ and I just…”

Yang trails off as the tears begin to fall.

“I was just like this, crying,” she says as she takes her glasses off and wipes her eyes. “It really does mean a lot to me.”

It means a lot because the National Science Foundation’s Graduate Research Fellowship Program (NSF GRFP) is a really big deal. According to the organization’s website, the award recognizes outstanding students in STEM fields who are pursuing research-based master’s and doctoral degrees. Fellows receive a three-year annual stipend of $34,000 plus a three-year, $12,000 cost-of-education allowance paid to their respective institutions. Applicants must be undergraduate seniors or first-year or early second-year graduate students.

Of the 2,051 students offered fellowships this year, four are Lehigh graduates: Yang and materials science major Michelle Kent are members of the P.C. Rossin College of Engineering and Applied Science’s Class of 2019. Shira Morosohk is a doctoral student in the Department of Mechanical Engineering and Mechanics, and bioengineering alum Daniella Fodera is pursuing graduate studies at Cornell University; both received undergraduate degrees from the Rossin College in 2018.

“Recipients of the fellowship are selected for their demonstrated potential to become outstanding, high-achieving scientists who are committed to creating a broader, positive societal impact,” says Susan Perry, a professor of practice in Lehigh’s Department of Bioengineering and its faculty graduate coordinator.

Since 1952, the NSF has funded more than 50,000 fellows out of a pool of 500,000-plus applicants. Past recipients include Nobel laureates and Google cofounder, Sergey Brin. More than 450 fellows have become members of the National Academy of Sciences.

Unlike Yang, Kent can’t remember where she was when she found out she got the award. She is also not exactly sure how she felt in that initial moment, although after a long pause, acknowledges she was probably excited. One thing she is certain about, however, was how she felt about the stipend. She’s starting a PhD program in metallurgy at Colorado School of Mines in the fall.

“I’m from the Midwest, so I think my practical nature comes out,” she says. “It’s expensive to live in Colorado. So what I had on my mind was, ‘Yay, financial stability during grad school!’ But then I talked to somebody about it maybe three days later, and they said, ‘This is a really big honor, you should be really proud of yourself.'”

She laughs. “And I was like, I never even thought of that!”

It wasn’t welding that initially drew her to material science, but an interest in how materials change the function and value of things.

Her involvement with research at Lehigh began with an invitation from a professor during her sophomore year.

“I had a lot of professors in the materials science department especially, who are interested in having people on research groups, so they get us involved as much as we want to be,” she says. “Welding was a cool avenue that I’ve been able to do a lot of stuff in, and work on different projects, as well as work in one area for a long time.”

For PhD student Morosohk, the prestige that comes with the NSF GRFP is the most rewarding.

As a freshman, Morosohk knew she wanted to do something with renewable energy and chose mechanical engineering as the path to get there. But it was an elective that happened to fit into her senior year schedule–Mechanical Engineering 362: Nuclear Fusion and Radiation–that ultimately determined her research focus.

“I ended up really loving the class,” she says. “And after the semester ended, I got an email from the professor asking, ‘Do you want to do your PhD with me?'”

She did, and Morosohk is now working with Professor Eugenio Schuster on the intersection of plasma physics and control systems in nuclear fusion.

Yang, Kent, and Morosohk all say their NSF fellowships reveal a lot about their Lehigh education. Their classes sparked their interest and gave them direction. Their professors offered them research opportunities. Their projects provided them exposure and experience. Their advisors supported, guided, and pushed them.

And no doubt, lifted them.

Yang, who will enter the bioengineering PhD program at the University of Maryland, College Park, came to Lehigh as a part of the Rapidly Accelerated Research Experience, or RARE. The pre-admission-to-graduation STEM immersion program provides research and leadership opportunities to students from backgrounds that are underrepresented in science, technology, engineering, and mathematics.

As part of her research experience, Yang has focused on developing hydrogels that will eventually encapsulate stem cells and influence how those cells develop for tissue regeneration. She admits that she can be hard on herself–“Yeah, oh yeah,” she laughs–even going so far as saying the fellowship “feels like the one thing I did right.” And so her list of those she’s thankful for runs long. They have all “shaped who I am now,” she says. A bioengineer who wants to work with biomaterials to improve drug delivery systems. And now, a National Science Foundation Graduate Research Fellow expected to contribute to the well-being of society.

“I’ve been really fortunate to have people support me here at Lehigh,” she says. “And I want to thank everyone who has helped me in my college career. I’m really grateful.”

During that time, Fodera was a coauthor on two research publications: “Characterization of NvLWamide-like neurons reveals stereotypy in Nematostella nerve net development” and “New bioactive glass scaffolds with exceptional qualities for bone tissue regeneration: response of osteoblasts and osteoclasts.”

Perry worked with Fodera throughout her undergraduate studies, serving as her academic adviser; coordinating a 2016 summer research internship at the National University of Ireland, Galway, in which Fodera participated; and working with her on Bioengineering curriculum development through Lehigh’s Kern Entrepreneurial Engineering Network (KEEN) grant.

The research projects Fodera was involved in “were varied, in-depth, and highly collaborative,” says Perry, “and all were productive, which is rare for an undergraduate researcher. Clearly, Daniella has found a formula for success and, not surprisingly, it is based on her strong work ethic and a dedication to making an impact on healthcare through the tools of bioengineering.”

Fodera currently works in the lab of Nelly Andarawis-Puri, an associate professor at Cornell’s Sibley School of Mechanical and Aerospace Engineering, where she will examine the role of inflammation in the repair of tendon injuries using regenerative animal models.

“In years down the line, by doing this basic research and looking at the mechanisms underlying different injuries and repair, it will better inform clinical management,” says Fodera, who is passionate about the clinical translation of her research in the biomedical field.

To save biodiversity and feed the future, first cure ‘plant blindness’

How people trick themselves into thinking something is heavier than it…