Foundations of robotics: A multidisciplinary approach with python and ROS

The field of robotics has been evolving at the speed of light over the past half-century. Today, robots are firmly embedded in our daily reality. They can be found in plants, hospitals, restaurants, homes and many other places. Some even take centre stage during artistic performances! 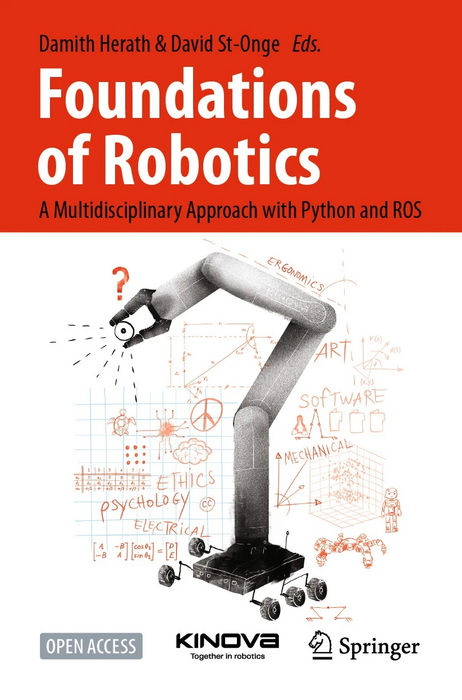 The field of robotics has been evolving at the speed of light over the past half-century. Today, robots are firmly embedded in our daily reality. They can be found in plants, hospitals, restaurants, homes and many other places. Some even take centre stage during artistic performances!

In short, robotics is no longer the exclusive bailiwick of engineers, physicians or research groups. There is a large community of robot connoisseurs and enthusiasts. However, understanding the ins and outs of modern robotics involves more than just technical knowledge. It also involves asking some fundamental questions, especially with respect to issues related to ethics, safety standards and the needs of users.

The Foundations of Robotics manual is designed to allow the reader to develop a multidisciplinary vision of robotics. It is intended for those who wish to dive headfirst into the technical universe of robotics, but also for teachers who are seeking to adapt their courses to today’s reality.

Each chapter includes a quiz to test the knowledge of readers, and the last two chapters propose a large-scale practical project that can be used to evaluate the level of learning achieved with respect to the information presented in the entire manual. The code and technical documentation for the laboratory projects can be found at the GitHub public repository for the book, at https://github.com/Foundations-of-Robotics.

Contextual design, interaction design and design thinking are among the many topics covered in this book, along with the kinematics of robots, machine learning (AI) in robotics and the selection and combining of sensors.

To the best of our knowledge, this is the best robotics manual in terms of being adapted to the needs of teaching robotics in the 2020s

Thanks to a contribution from Kinova, a Québec company that specializes in robotics, the English version of Foundations of Robotics: A Multidisciplinary Approach with Python and ROS, is now available in free access at http://bit.ly/3tBS5Nu

The first two chapters of the French version are currently available at: https://pressbooks.etsmtl.ca/fondementsrobotique/.

Damith Herath (Ph.D., Robotics) is an Associate Professor in Robotics and Art at the University of Canberra. Damith is a multi-award winning entrepreneur and a roboticist with extensive experience leading multidisciplinary research teams on complex robotic integration, industrial and research projects for over two decades. He founded Australia’s first collaborative robotics startup in 2011 and was named one of the most innovative young tech companies in Australia in 2014. Teams he led in 2015 and 2016 consecutively became finalists and, in 2016, a top-ten category winner in the coveted Amazon Robotics Challenge – an industry-focussed competition amongst the robotics research elite. In addition, Damith has chaired several international workshops on Robots and Art and is the lead editor of the book “Robots and Art: Exploring an Unlikely Symbiosis” – the first significant work to feature leading roboticists and artists together in the field of Robotic Art.

David St-Onge (Ph.D., Mech. Eng.) is an Associate Professor in the Mechanical Engineering Department at the École de technologie supérieure (ÉTS Montréal) and director of the INIT Robots Lab (initrobots.ca). David’s research focuses on human-swarm collaboration more specifically with respect to operators’ cognitive load and motion-based interactions. He has over 10 years’ experience in the field of interactive media (structure, automatization and sensing) as workshop production director and as R&D engineer. He is an active member of national clusters centered on human-robot interaction (REPARTI) and art-science collaborations (Hexagram). He participates in national training programs for highly qualified personnel for drone services (UTILI), as well as for the deployment of industrial cobots (CoRoM). He led the team effort to present the first large-scale symbiotic integration of robotic art at the IEEE International Conference on Robotics and Automation (ICRA 2019)..