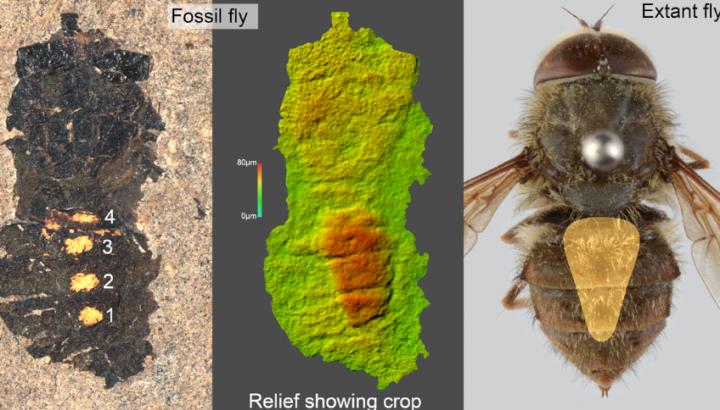 It was not the fly itself that caught the scientists’ attention, but its bulging abdomen suggesting it was still full with the fly’s last food intake. Surprisingly, analysis of the stomach content revealed it was full with pollen from different plants. The fossil pollen from the fly’s stomach was used to reconstruct the ancient environment inhabited by the fly, the biotic interactions between plant and fly, and the fly’s behaviour during feeding.

Today, bees, butterflies and bumblebees are the typical pollinators, which are also known to feed on pollen. That flies also play an important role in pollination is rarely addressed. “The rich pollen content we discovered in the fly’s stomach suggests that flies were already feeding and transporting pollen 47 million years ago and shows it played an important role in the pollen dispersal of several plant taxa”, says Fridgeir Grímsson from the Department of Botany and Biodiversity Research of the University of Vienna. “Flies were major pollinators in ancient (sub-)tropical equivalent ecosystems and might even have outshined the bees”, the scientist concludes.

The extracted pollen was dominated by grains of Decodon (waterwillow) and Parthenocissus (virgin ivy). Today, the waterwillow is a sub-shrub growing in wetlands and the shallows of lakes, suggesting open low canopy habitat. The co-dominance of virgin ivy also suggests that the fly fed on plants growing at the forest margin surrounding the ancient Messel lake. “It is likely that the fly avoided long-distance flights between food sources and sought pollen from closely associated plants”, says Grímsson.