Fossil zooplankton indicate that marine ecosystems have entered the Anthropocene 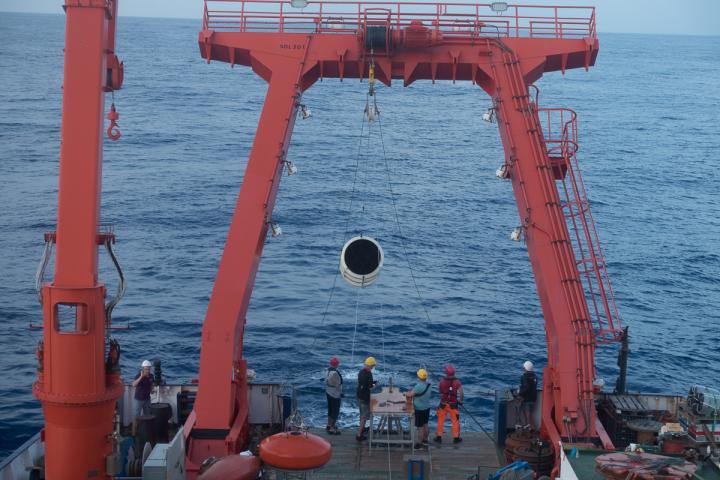 It can be said that marine plankton has now entered the Anthropocene epoch. The researchers compared the compositions of fossil plankton (foraminifera) assemblages in sediments of the pre-industrial era with those of more recent times. The team has published their results in the journal Nature.

Planktonic foraminifera are microscopic organisms that live in the surface waters of the oceans. When they die their calcareous shells are deposited in the seafloor sediments. These fossil foraminifera document the species communities before humans began to alter the Earth’s climate. In turn, information on the present-day state of planktonic foraminifera is revealed by samples collected in sediment traps over the past 50 years. By comparing the fossil and modern communities of foraminifera, researchers can determine to what extent the plankton assemblages have changed since the beginning of industrialization.

For their study, Dr. Lukas Jonkers and Prof. Michal Kucera of MARUM at the University of Bremen, and Prof. Helmut Hillebrand of the Institute for Chemistry and Biology of the Marine Environment (ICBM) at the University of Oldenburg, compared over 3,700 samples from pre-industrial sediments with samples from sediment traps that reflect the plankton status from 1978 to 2013. The scientists have concluded that the present-day species communities are systematically different from pre-industrial times. “The exciting result was that this difference is not accidental, rather it reflects a signal of global warming. Modern communities in areas that are becoming warmer are similar to pre-industrial communities from warmer regions, indicating that species communities have shifted their distribution in a direction consistent with temperature change,” explains Lukas Jonkers.

“We have known for a long time that species associations are changing, but for many biological communities there were no reliable benchmarks, particularly on a global scale, due to the short time duration of observations,” says Jonkers. This has now changed with the data analyzed by these workers. “The data set is very large and also globally representative.” The disturbing aspect of the observation is that in many regions of the ocean the plankton communities have evidently migrated “into alien waters”. There they must adapt to new conditions and, in some cases, rebuild their food webs. “The question is whether they can do this rapidly enough, or whether climate change will progress faster than the communities can adapt,” says Michal Kucera.

“Our cooperation illustrates how important it is for paleoecology and modern biodiversity research to work together,” adds Helmut Hillebrand. He is the head of the planktology working group of the ICBM and of the Helmholz Institute for Functional Marine Biodiversity at the University of Oldenburg. “Our study helps to understand how climate change impacts biodiversity. This is one of the prominent questions in the latest global report by the Intergovernmental Science-Policy Platform on Biodiversity and Ecosystem Services (IPBES).

The reaction of marine ecosystems to climate change is an ongoing topic of research by scientists in Oldenburg and Bremen within the Cluster of Excellence “The Ocean Floor – Earth’s Uncharted Interface.”

MARUM produces fundamental scientific knowledge about the role of the ocean and the ocean floor in the total Earth system. The dynamics of the ocean and the ocean floor significantly impact the entire Earth system through the interaction of geological, physical, biological and chemical processes. These influence both the climate and the global carbon cycle, and create unique biological systems. MARUM is committed to fundamental and unbiased research in the interests of society and the marine environment, and in accordance with the Sustainable Development Goals of the United Nations. It publishes its quality-assured scientific data and makes it publicly available. MARUM informs the public about new discoveries in the marine environment and provides practical knowledge through its dialogue with society. MARUM cooperates with commercial and industrial partners in accordance with its goal of protecting the marine environment.

Scienmag Apr 18, 2019
University of Arkansas physics professor Daniel Kennefick writes about the 1919 eclipse, which provided the data to…