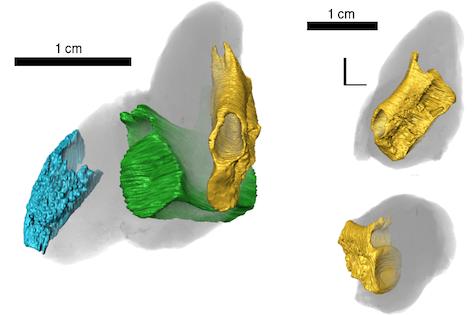 A new study of coprolites, fossil poop, shows the detail of food webs in the ancient shallow seas around Bristol in south-west England. One hungry fish ate part of the head of another fish before snipping off the tail of a passing reptile.

Marie Cueille, a visiting student at the University of Bristol’s School of Earth Sciences, was working on a collection of hundreds of fish poops from the Rhaetian bone bed near Chipping Sodbury in South Gloucestershire, dated at 205 million years ago.

She applied new scanning technology to look inside these coprolites and found an amazing array of food remains.

Marie said: “The ancient fishes and sharks of the Rhaetian seas were nearly all carnivores. Their coprolites contain scales, teeth, and bones, and these tell us who was eating whom. In fact, all the fish seem to have been snapping at each other, although the general rule of the sea probably applied: if it’s smaller than you, eat it.”

The CT scans of one tiny coprolite, measuring only a centimetre or so in length, contained only three bones, one a highly tuberculated skull bone of another fish, and two vertebrae from the tail of a small marine reptile called Pachystropheus.

Dr Chris Duffin, who collaborated on the project added: “This shark probably snapped at another fish or scavenged some flesh from the head region of a dead fish. But it didn’t just strip off the flesh but swallowed great chunks of bone at the same time. Then it snapped at a Pachystropheus swimming by and had a chunk of its tail.”

Professor Mike Benton, who co-supervised the study, said: “What amazed us was that the bones and scales inside the coprolites were almost completely undamaged. Today, most predators that swallow their prey whole, such as sharks, crocodiles or killer whales, have powerful stomach acids that dissolve the bone away. These ancient fishes must have had a painful time passing their faeces which were absolutely bristling with relatively large chunks of bone.”

The researchers also identified for the first time some coprolites of crabs and lobsters, so this completes the food web. The marine reptiles and sharks were feeding on smaller fishes, which in turn fed on even smaller fishes and lobsters. Some also had crushing teeth adapted to feeding on oysters and other molluscs.

The study has a classical resonance as well, because Rhaetian coprolites from bonebeds near Bristol were some of those studied by William Buckland (1784-1856) in the 1820s when he invented the name ‘coprolite’. Buckland was Professor of Geology at Oxford University, but also Dean of Christ Church, and known for his unusual eating habits. Possibly his interest in eating exotic animals (he would serve his guests roasted dormice or potted panther but declared that moles and house flies were inedible) gave him an interest in animal diets.

Buckland pioneered the use of coprolites to reconstruct ancient food webs. He also collected specimens from the Jurassic around Lyme Regis, and many were supplied by famous fossil collector Mary Anning (1799-1847). Buckland even had these larger coprolites cut across and set into the top of a table, which was highly polished and doubtless formed a conversation opener during lunch and tea parties in the Dean’s lodgings.

The new work also sheds light on the Mesozoic Marine Revolution, the time when marine ecosystems modernised. The coprolites from Bristol show a complex, modern-style ecosystem with lobsters, bony fishes, sharks and marine reptiles at the top of the food web.
Reconstructing the timing of the event is of current interest, and the new work suggests the process began earlier than had been thought.

‘Fish and crab coprolites from the latest Triassic of the UK: from Buckland to the Mesozoic Marine Revolution’ by M. Cueille, E. Green, C.J. Duffin, C. Hildebrandt, and M. J. Benton in Proceedings of the Geologists’ Association (doi: 10.1016/j.pgeola.2020.07.011).